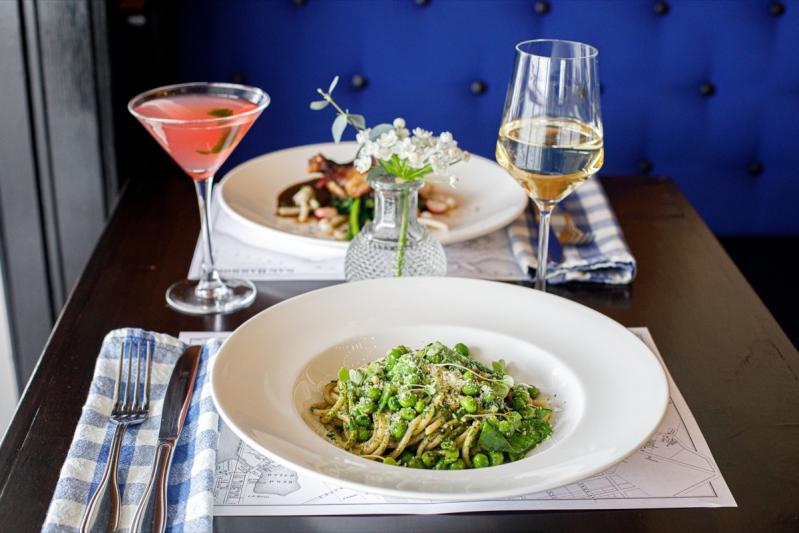 Bargain Bistros
Inflation has affected everyone's bottom line this year. To offer a little relief, Long Island Restaurant Week returns for spring beginning Sunday, bringing specially priced and wallet-friendly menus for lunch and dinner throughout the area until May 1.

Restaurants opting to participate will offer one or a number of options, from a $20 two-course lunch to three-course dinner menus priced at $25, $35, or $42. For dinner, the restaurants will have three options for each course: appetizer, entree, and dessert. The menus will be offered all night except Saturday, when they are required to be served only until 7. Some 100 restaurants in both Nassau and Suffolk Counties have signed on to the program.

Closer to home are the South Fork restaurants Manna at the Lobster Inn, the Southampton Publick House, and Union Steak & Sushi in Southampton, Sag Harbor's Page at 63 Main, and Calissa in Water Mill.

In Riverhead and on the North Fork, the Cooperage Inn in Baiting Hollow, Riverhead's Bistro 72 and the Preston House, On the Docks in Aquebogue, and Legends in New Suffolk are some of those signed up. A full and regularly updated list of participants is available at the Long Island Restaurant Week website.

Vino for Primavera
Next Thursday, Nick and Toni's in East Hampton will present a dinner with featured wine pairings from the Marche, Liguria, Campania, Alba, and Emilia-Romagna regions of Italy.

The evening's menu, served from 6 to 9 p.m., will have five courses beginning with antipasti paired with a rosato di Montepulciano and followed by a cavatelli pasta course with rossese di Dolceacqua, olive oil-poached halibut with Greco di Tufo, and boneless lamb loin with Barolo. Dessert is a ricotta and orange napoleon served with walnut liqueur.

The cost for the meal is $150 plus tax and tip. Wines from the dinner can be ordered at the event with special pricing through Jacques Franey of Domaine Franey. More details about the menu and reservations are on the restaurant's website.

Doughnuts and Cream
Doughnuts aren't just for breakfast anymore. They have become an any-time-of-day treat. And while we're breaking rules, why not think of the mini cake as a dessert, worthy of a side of ice cream and a cup of joe?

The small batch ice cream can be bought at Dreesen's catering kitchen at 15 Lumber Lane and in the warmer months at John's Drive In and Vicki's Veggies farm stand on Montauk Highway in Amagansett. Dreesen's Catering plans to include it as a dessert option, and it will also be served from its Donut Truck in individual serving cups for private events.

To arrange pick-up or make it a meal with Dreesen's pot pies (chicken, chicken cordon bleu, beef Bourguignon), meatloaf (beef or turkey), lasagna (vegetable or meat), or one of their soups, you can text Rudy at 631-702-5483.

This year, the hotel will offer sailing excursions and picnics to accompany guests on East End adventures, and will partner with the Pridwin Hotel and Cottages and its restaurant on Shelter Island to offer its guests even more amenities.

The spring operating hours are Thursday through Sunday beginning at 11:30 a.m.

Spring, Now Bottled
Although Wolffer Estate Vineyard in Sagaponack is primarily concerned with its wines, it has endeavored to offer something for the designated drivers among us.

Spring in a Bottle is a non-alcoholic rose designed to be part of a relaxing evening or afternoon as well as a companion to soups, salads, pork, and fish. It has just been released for this year.

Wolffer Verjus, another non-alcoholic offering, can be enjoyed as a spritzer or mixed in a cocktail. It also works well blended into sauces or dressings.

To Go Is to Stay
As part of this year's state budget, takeout drinks are now officially allowed under law. Noting that the to-go drinks were a significant source of revenue for bars and restaurants during the Covid-19 shutdowns, the governor's office said the legislation will allow them to sell alcoholic beverages "to-go" for a period of three years.

Bottle sales will be prohibited to protect liquor stores, which were concerned about the competition for revenue. Purchases must also accompany food orders and be provided in sealed containers. All to-go containers must comply with municipal open-container laws.

The budget law also included language calling for an examination of all alcohol and beverage control laws and creates a review commission to report on recommended improvements for businesses and consumers.

Some proposals to be considered include permitting liquor stores to be open Christmas Day, allowing veterans organizations to obtain licenses when a police officer serves as an officer of the organization, and giving farm manufacturers the option to allow food trucks or similar businesses to operate on their premises.