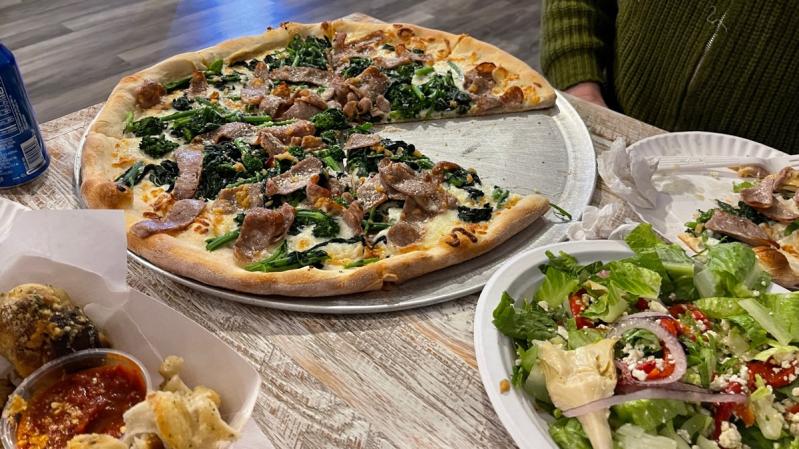 Garlic knots, cheesesteak subs, salads, and a wide selection of pizzas, including gluten-free, are all part of the Shelter Island Slice menu.
Ty Wenzel
By Kurt Wenzel

Over the last five years or so, the stakes have been raised for pizza on the East End. Brunetti's in Westhampton Beach, and Sag Pizza, among others, have made the idea of opening a ho-hum local pizza parlor almost unthinkable.

Joining the fray not too long ago was Shelter Island Slice. Opened just over a year ago, Slice takes over 9 Ferry Road, the space that previously held Piesanos. It is owned by Frank Venesina, whose family also owned the beloved Conca d'Oro restaurant in Sag Harbor (which now, ironically houses Sag Pizza).

Slice treads the line between local family pizza joint and more upscale, stylized offerings. It succeeds on both counts.

The decor is humble, offering what almost looks like the front parlor of a private house for dine-in service. The walls are shiplap with wooden tables and hard metal chairs (the grandparents may want to bring a cushion). The room can be a little chilly on cooler days and there is no waiter service in the off season, but the gentlemen behind the counter happily scoot around to bring you everything you need.

For those who remember, Conca D'Oro's pizza was very good. Slice has taken that restaurant's old standbys and given them a reboot, with a wider variety of styles and toppings. You can run in and get a classic New York slice, but there are also a number of excellent thin-crust pizzas, such as the rapini, which is a white pizza with sliced sausage and broccoli rabe. It is a large eight-slice pie heaping with toppings -- two slices might satisfy your average mortal.

A gluten-free option is a must these days. Slice's version is a 10-inch individual size, utilizing a paper-thin cauliflower crust and any toppings you want. We went for the margarita, the crust giving back a nice crunchy texture. You'll want to let it cool for a moment, however, as the toppings take longer to set on the cauliflower crust and can slide around.

To start there are a handful of salads, including a very good gorgonzola. Along with the cheese came artichokes, roasted peppers, onions and romaine, with a nice house Italian dressing. We also went full-on carb crazy and ordered garlic knots, which were, like everything else here, prepared with more care than you'll find at your average pizza parlor. Drizzled with olive oil, topped with garlic and parsley, they arrived with a sweet marinara dipping sauce.

Naturally we had to try the Philly steak hero, prepared with chopped steak and provolone. It was appropriately messy, dripping with juices and served on ultra-soft Italian bread.

There is a small bar counter, but it's beer and wine only at Slice. Both the house red and white are solid enough, and the draft beer also comes in a pitcher size ($18).

There are no desserts on the menu, but there is a fridge where a few sweets sit orphaned in sterile plastic containers almost daring you to take one home. The sight is daunting, but we took pity and grabbed the tiramisu, which turned out to be sensational -- moist, creamy, and not too sweet.

For nicer weather, there are picnic tables outside, which drives home Slice's unpretentious aesthetic. Unlike the stylish Brunetti, for example, it is not ideal for date night with the missus. Rather it is a family place that knows its strengths and stays with them, delivering on all of its modest ambitions.