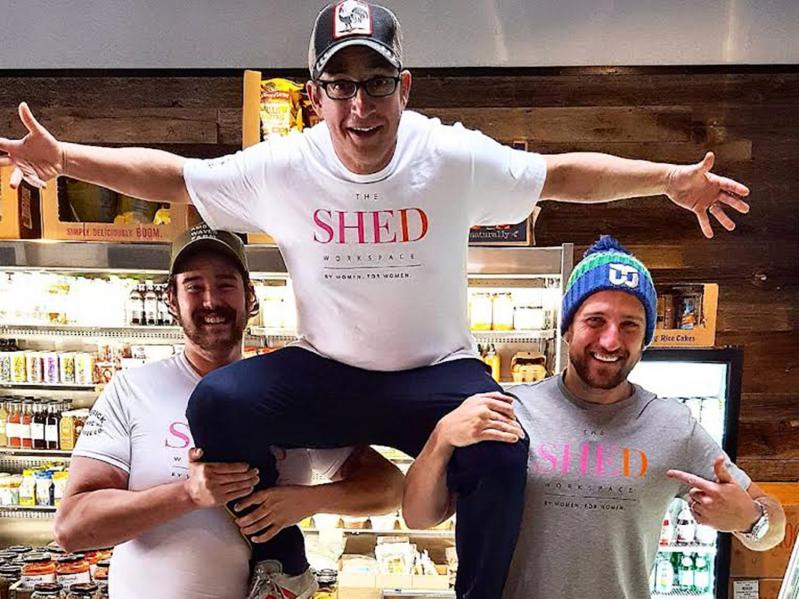 Jeremy Blutstein, right, is returning to Almond for one night to help prepare a dinner devoted to localism. With him were Jason Weiner, center, and Andrew Mahoney.
By Jennifer Landes

Last Minute Meal
Those last minute, couldn't quite get it together Thanksgiving feasters can try their luck getting a table at Leon 1909 in Shelter Island Heights. A newcomer this summer, the well-received restaurant is serving a French-inspired holiday set dinner from 4 to 10 p.m.

For $125 patrons will have a choice of French onion soup or a chicory salad with pear and pecorino to start. Entree choices are trout en croute, slow roasted guinea hen, or rosemary country ham. Desserts are apple tarte tatin or cranberry pudding. More details and reservations are available on the website.

Winter's Bounty
Farm stands and farmers markets typically close up on or about Thanksgiving. In recent years, the East End Food Institute has run an indoor winter food market in Riverhead, which takes over when other markets shut down. The site at 139 Main Road provides a place for farmers, fishermen, cottage food producers, and their patrons to gather in the colder months.

The market opens for the season on Saturday and will have vendors familiar to habitues of local markets such Blue Duck Bakery, Milla's Puffs, Mecox Bay Dairy, Sag Harbor Honey, the Perfect Pickle, North Fork Oysters, and dozens more along with less regular pop-up stalls. Hours are 9 a.m. to 1 p.m. on Saturdays only.

Almond's Localism
The time around Thanksgiving is about homecomings and in that spirit, Almond restaurant is welcoming its former chef de cuisine, Jeremy Blutstein, back to its Bridgehampton kitchen for a special localism dinner they're calling Three's Company at Almond. Mr. Blutstein, who is working on opening his new restaurant Maverick Montauk, will be joined in making next Thursday's dinner by Almond's executive chef, Jason Weiner and its current chef de cuisine, Andrew Mahoney.

Sagaponack for the Holidays
Holiday gatherings often mean cocktails, and Sagaponack Farm Distillery is offering South Forkers a way to stir or shake up some festive drinks while they celebrate localism. The distiller (which is in Sagaponack and not just adopting the name as some do) has a Bloody Mary kit for $75 to $85 with vodka, fresh Bloody Mary mixer, Foster Farm potato chips, and pickled carrots. It also has bottles of its gin, wheat vodka, and malted rye for sale, from $35 to $55 per bottle, in its Sagg Road tasting room. More information is on the website.

Lobster Rolling
The Lobster Roll in Southampton has a fall prix fixe menu of three courses for $35 served from 4:30 to 8:30 p.m., Thursday through Sunday. There are multiple starters and entrees and featured wines for $10 per glass or $40 per bottle.

Garlic Planting
Aspiring or experienced gardeners who want to work off some of Thanksgiving dinner are welcome to help Sylvester Manor plant its garlic bulbs for next season on Saturday. Beginning at 10 a.m. at Windmill Field on Manwaring Road, volunteers will help plant bulbs. The bending, squatting, kneeling, carrying, and crouching could be as strenuous as a bootcamp class and more rewarding in some ways. The farm says singing, songs, and instruments are welcome to liven the spirit.

Sylvester Manor's farm stand will close on Thanksgiving, but it will be at the Riverhead winter food market beginning this week. It is also offering winter egg shares with a dozen eggs per week for 18 weeks starting Friday, Dec. 2, at a cost of $185.40. More information about signing up is on the website.

Winter at Quail Hill
Winter produce shares are still available at the Peconic Land Trust's Quail Hill Farm in Amagansett, and even though those who join now missed the first pickup on Friday and Saturday, there is still plenty of bounty to come. Shares start at $300 for those of more limited means, but a standard share costs $525. Pickup is on Fridays and Saturdays every other week through the end of February. Among the treats members can look forward to: winter squash, parsnips, carrots, potatoes, cauliflower, broccoli, cabbage, dried beans, smoked peppers, and, soon, salad greens from the farm's hoop houses. Sign-up is online at peconiclandtrust.org.