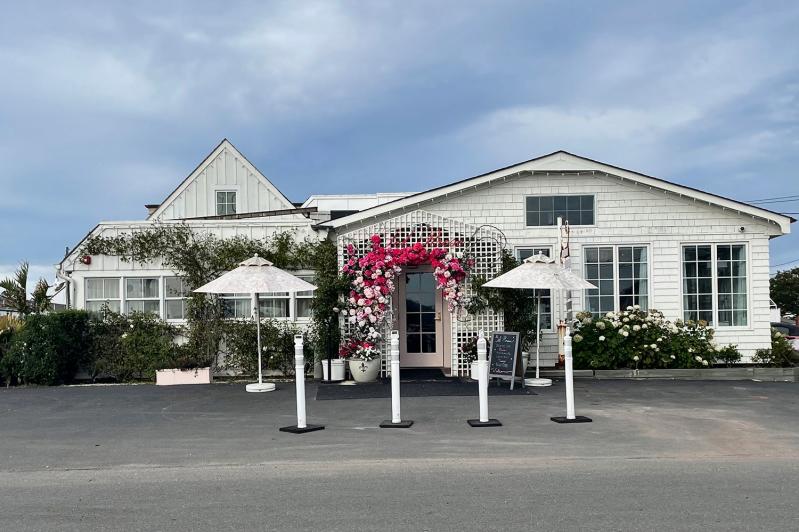 Sel Rrose in Montauk seems like it's been here forever and here to stay.
Jane Bimson
By Kurt Wenzel

Opening in 2019, nearly in the very teeth of Covid, Montauk's Sel Rrose restaurant hasn't had an easy beginning. However, with good food, a sophisticated cocktail and wine list, and three years already under its belt, it looks like a winner that's here to stay.

Located just off Montauk Highway, Sel Rrose somehow seems like it's been here forever. The East End location is the restaurant's second iteration, with the owner, Kristen Vincent's, original version on Manhattan's Lower East Side. The decor is not easy to define, but lands somewhere between beachy Hamptons and nouveau French country. The barn-style dining room is framed in brass grid fixtures and sports a large mural by Candice Kaye Designs. In summer there is outdoor seating as well, but many won't want to miss the handsome oval bar or sui generis interior.

There is an inventive beverage program at Sel Rrose which includes a number of very good cocktails. We had a Heavyweight Daquiri, which included both regular and overproof rum, and a pamplemousse margarita, which is a fancy way of saying that grapefruit is added to the recipe. Both were well-made and quite delicious.

Sel Rrose also sports a number of "natural" wines. Defining what exactly the term means is complicated, but in a nutshell it is the idea that nothing should be added or taken away during fermentation. We tried one by the glass, an aligote, which arrived characteristically cloudy in the glass and fizzy on the palate. This paired well with a first-course appetizer of Pernod oysters Rockefeller. This is a dish that can get away from chefs, as they often bury the oyster in a mound of spinach and cheese. But the chef, Shawn Hewitt, gets it just right, limiting the proportions to highlight some very good local oysters.

The Thai coconut curry mussels were even better, served in a thick, ultra-creamy broth with lemongrass, ginger, and cilantro. The mussels are served with a spoon, which is good news since you may want to sample the broth-like a soup once the mussels are gone.

The Angry Octopus was a little small, served as a brace of three-to-four ounce segments. Furthering the disappointment was how good it was, the very tender meat accompanied by just the right amount of chili oil for a kick.

For entrees, the braised short ribs looked spectacular and were surrounded by some nicely crisp root vegetables, but the meat itself was a bit chewy. Grilled swordfish was better, very fresh tasting and served with a light cream sauce. The meat was cooked to a perfect medium with a nice char from the grill. (The chef, it seems, is inordinately proud of his mashed potatoes, which accompanied both the swordfish and the short ribs . . . and most other entrees.)

Checking in at 26 bucks, the Sel Rrose burger better be good, and it is. It's a hearty size, served with cheese, bacon, and a "secret sauce" that will have you skipping the ketchup.

A side of truffle fries could have used more truffle flavor, but displayed a nice starchy texture.

For dessert we shared a very good cinnamon and ginger creme brulee, deliciously creamy with the classic burnt sugar shell on top.

Sel Rrose can get busy, and could probably use someone at the front door, as the bartender is forced into triple duty -- seating, serving drinks, and backing up the server. Still, everything holds together, and drinks, wine, and food all arrive with precise timing.

There is an extensive raw bar at Sel Rrose, and with deep pockets you can do some serious damage with massive shellfish plateaus and caviar. In fact, with so many great small plates -- there were at least three more we were interested in trying -- and an array of raw shellfish, it begs the question if Sel Rrose's menu isn't best explored through grazing.

Though closed Tuesdays, Sel Rrose is planning to remain open all winter. And why not, with a uniquely stylish restaurant and mostly excellent food? In a market characterized by transience, it feels here to stay.