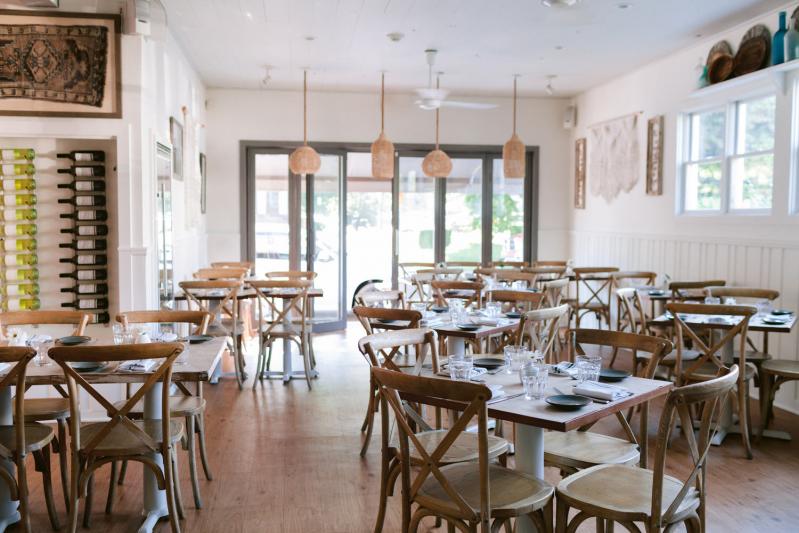 Elaia Estiatorio is participating in Long Island Restaurant Week, which continues through Sunday.
By Jennifer Landes

Restaurant Week Continues
There may be some real signs that the post-pandemic population explosion in the off season has finally abated. To wit, the fall edition of Long Island Restaurant Week, which runs until Sunday, has several more participants than in recent outings. South Fork restaurants in this go-round include Cove Hollow Tavern in East Hampton, Elaia Estiatorio and Jean-Georges at Topping Rose House in Bridgehampton, Page at 63 Main in Sag Harbor, Calissa in Water Mill, as well as Bamboo, Manna at the Lobster Inn, Plaza Cafe, Saaz, Southampton Publick House, and Union Sushi and Steak in Southampton.

Restaurants must offer a three course dinner at any one of three price points: $27, $37, or $44, and some have opted to offer two or all three tiers (Manna, plus a two-course lunch), and most are not holding back. For example, the Plaza Cafe is offering some of its menu classics with luxury items like prosciutto wrapped shrimp atop mushroom risotto as an appetizer and flat iron steak or horseradish-crusted cod as entrees in its $44 menu. Its lobster and shrimp shepherd's pie is being offered in a half portion with a $20 supplement in addition to other options. Jean-Georges has a tuna tartare appetizer and Faroe Island salmon in its mix of offerings for $44. Cove Hollow's $37 menu looks creatively interesting along with the more regular participants such as Elaia, Calissa, Manna, and Union. All menus include dessert and most are on the Long Island Restaurant Week website along with Saturday night limitations, i.e. most specials are cut off after 6:30 p.m. that evening.

Manna Mondays
On Monday, Manna at the Lobster Inn will bring back its educational program Manna Mondays. Jack Farley and Tommy Clune of Sebonac Inlet Oyster Farms will discuss their Peconic Tonic Oysters. Donna Lanzetta, the chief executive officer and founder of Manna Fish Farms and the Manna Companies and Jesse Matsuoka, a partner in the restaurant, will discuss the launch of the Manna Seafood Blockchain, of which he is vice president. Complimentary appetizers and beverages will be served during the presentation.

The program is free and starts at 6 p.m. There are happy hour specials and regular dinner service during and following the talk.