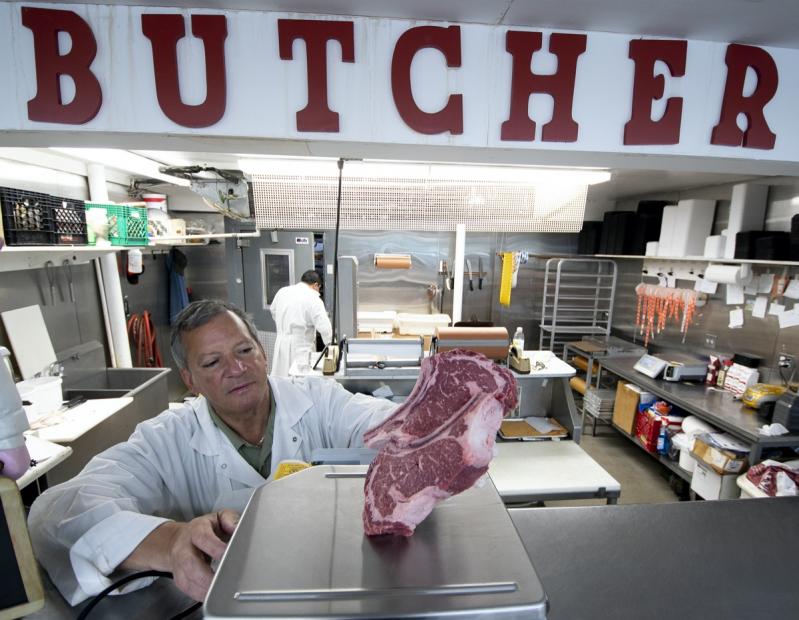 "If you need anything special, please let me know" is a familiar refrain at the meat counter inside Cromer's Market in Noyac, where Ray Samot, Cromer's butcher, made the final knots on a loin as he chatted with the stream of customers approaching the counter. It was mid-afternoon on a Thursday and people were already planning for weekend dinners.

As people hunkered down during the pandemic, busy home cooks kept Mr. Samot and his team working at a breakneck pace. No idle hands for doom-scrolling when you're chopping or baking or grilling.

When asked "Do you ever think about how many memorable meals you've helped create for families?" somehow Mr. Samot deftly deflected by talking about smoked kielbasa, loins, T-bones, chops, pork butts, and brisket as he ventured into a walk-in refrigerator that leads to a larger walk-in. The conversation shifted to the plump smoked kielbasa made in-store that hung in rings along one wall. An immense stainless steel meat grinder occupies a large corner of the chilled room. These walk-in refrigerators are the secret behind the deceptively pint-sized case at the front of the store. There's a vast assortment of options that wouldn't fit in the brightly lit front vitrine.

Mr. Samot has had time to hone his butchery skills. At the age of 15, he started working at Dreesen's Excelsior Market in East Hampton Village. It was well-known for its doughnuts in addition to being a well-stocked butcher shop and all-around market. At Dreesen's, Mr. Samot learned the basics of butchery, and it started him on a path to his career. After Dreesen's, he went to school in Toledo, Ohio, to further sharpen his craft. The techniques haven't changed much since then, he said, but family meals have.

Preferences for cuts have evolved. Whereas he used to sell 40 legs of lamb in a weekend, nowadays many customers gravitate toward cuts that can be smoked or grilled. As Mr. Samot butterflied a leg of lamb, both of his hands worked in synch to rotate and carve the meat off the thick femur bone, creating a single piece for the grill that was nearly uniformly flat and weighed in at about six pounds of meat. As he worked, Mr. Samot looked up frequently, nodding and saying hello to customers approaching the counter. It's evident in his interactions that he finds pleasure in making sure customers find what they want.

Many of Mr. Samot's repeat customers have been perfecting their recipes with home smokers and grills. He said wives will jokingly tell him, "Don't give him anything more to smoke!" he said, but of course, he doesn't listen. In the end, everyone's a winner.