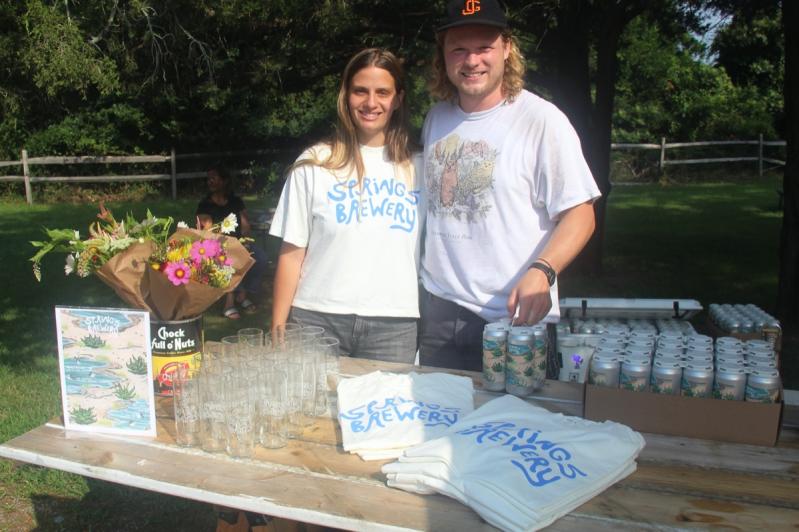 "Sandy loam" is a component of the fertile soils that make the South Fork rich with agricultural potential. It's also the name of a beer made by a brewery that's been growing a name for itself over the last six years, the Springs Brewery.

Lindsay Reichart and Gunnar Burke, Northwest Woods residents who have a deep appreciation for local food, culture, art, history, and social justice, are its founders.

"We came to brewing through the art of fermentation," Ms. Reichart said. "We were learning how to ferment things and felt that that really aligned with our art and design practices and a lot of the work we were doing in food justice. We're huge beer lovers, so it evolved into starting to brew."

Sandy Loam, a pale ale made with Cascade hops from the Hoppy Acre farm in Amagansett, as well as another hop variety called Mosaic, is the brewery's third recently released label. Made with "a hefty portion of wheat," as Ms. Reichart and Mr. Burke described it, its mouthfeel is soft and a touch bitter, with berry notes that complement its "briny-earthiness."

"We view ourselves as craftspeople. We're obsessed," Mr. Burke said. "We see great alignment with that sensibility and history of Springs -- the arts, culture, working with your hands."

Lately, the two brewers have been doing pop-up appearances on Saturdays at the Springs General Store. In addition to collecting donations for the Springs Food Pantry, they sold out of their first two varieties, Arethusa and Walking Dune. Released in mid-August, Arethusa, at 7 percent alcohol by volume, has a "citrus-forward" profile with lots of flavor and little bitterness. Walking Dune, released in early September, is a 5-percent Kolsch with New York State malt and green yuzu and mango orange zest from fruit grown in New Jersey.

They can their beer just a couple of days before they sell it to make sure it's super fresh, "as opposed to distributing it to stores, where it might warm on a shelf for a while and it's not as good as it can be and no one's happy," Mr. Burke said.

"We view our brewing as iterative," he later added. "We like to try new things always, so we want to keep pushing forward and trying different styles with every beer we do."

They work out of the Ubergeek Brewing Company's space and tasting room in Riverhead, which was formerly the Moustache Brewing Company's tasting room. (Moustache still makes beer, which can be found at local bars and beverage stores.) Rowdy Hall, Springs Tavern, and Townline BBQ have carried limited quantities of Mr. Burke and Ms. Reichart's creations, tapping out the kegs rather quickly because of the brewery's small-batch system.

"Depending on the beer and how we keep working out relationships with different restaurants, we might do more kegs and fewer cans -- we're just figuring that out a little bit as we go," Mr. Burke said.

Harkening to the landscapes of the East End, the cans' labels are works of art in themselves, designed so far by Charlie Ly and Emma Turner. The brewers' hope is to someday have a tasting room of their own. They can be found on Instagram at @springsbrewery, where they post information about their can releases and insights into their brewing process.

"We envision this beer as a social incentive that can bring people together and create an inclusive experience," Ms. Reichart said. "Beer can open people up to new things that they haven't necessarily tried. . . . We see it as being a community-oriented project."