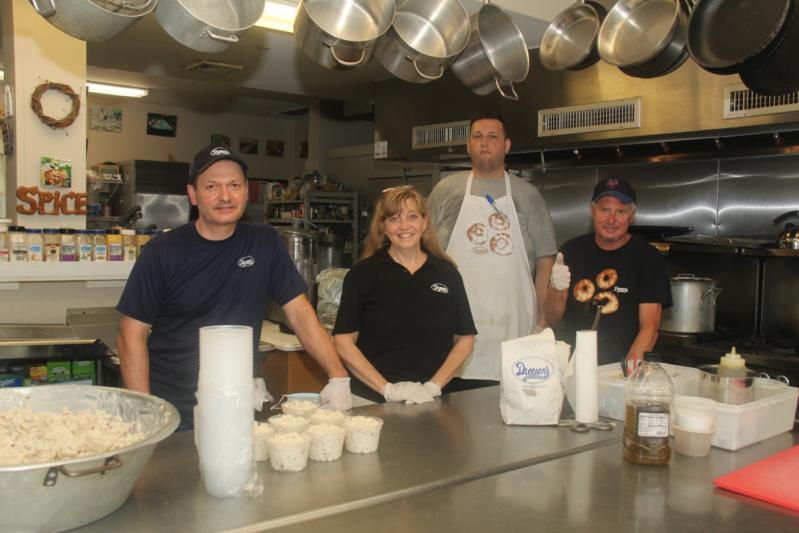 Dreesen's doughnut†walls have been a popular feature at recent events, adding a sweet touch of color to the caterer's dessert spreads.
Christina DeSanti
By Christine Sampson

Doughnuts have come a long way since the time-to-make-them commercials for Dunkin' Donuts that premiered in 1984, but even before that -- starting in the 1950s -- Dreesen's was making them popular here with its original recipe.

The local doughnut dynasty is still thriving and expanding, despite the challenges presented by the Covid-19 pandemic.

"There are a lot of really fun, creative things we've been able to do with the doughnuts," said Christina DeSanti, who owns the catering company with her husband, Rudy DeSanti.

The December 2020 closure of Scoop du Jour, the East Hampton Village ice cream mecca that made Dreesen's doughnuts, was a blow to business -- but only briefly. Big Olaf in Sag Harbor was still making them, as was the Milk Pail farm market in Water Mill. M&R Deli has now picked them up, making them at its locations in Montauk and East Hampton, and Vicki's Veggies in Amagansett, the Chequit Inn on Shelter Island, and Santa's Christmas Tree Farm on the North Fork are adding equipment to make Dreesen's doughnuts, Ms. DeSanti said in an interview.

"There are a few more we'll be announcing soon," she said.

Factor in the Donut Truck, which brings the hole-some treats wherever the roads can take them. More recently, Dreesen's has added "doughnut walls" to its tasty repertoire after the creative realm that is Pinterest started exploding with pictures of new ways to display them. Doughnut walls line up the treats on pegs that protrude from boards that stand up vertically, adding an attractive dimension.

"We had always brought the portable machine, but then we started really getting into the display," Ms. DeSanti said. "We've played with it. We have all different sets -- white for weddings, a clear set for more modern events. We have such cute things. The desert table winds up being an incredible conversation piece."

Dreesen's did a rainbow of frosted doughnuts in June for Pride Month, and made an eight-by-four-foot American flag for an event on the Fourth of July.

Matt Meehan, who owns M&R Deli with his wife, Nicole Meehan, said the addition of Dreesen's doughnuts has been great for business. They picked them up in East Hampton in March this year, and followed at their Montauk location in in May, filling the hole left by the closure of his Montauk predecessor, Ronny's, which had carried Dreesen's doughnuts. M&R Deli even pays tribute to the late Scoop du Jour and the original Dreesen's in East Hampton by setting up its doughnut machine in the window of the Montauk store.

The Dreesen's doughnuts stand out in that location, Mr. Meehan said, despite being situated near the Montauk Bake Shoppe, the Hampton Coffee Company, and Sundae Doughnuts, and generally in a region that is also served by Grindstone in Sag Harbor and the North Fork Doughnut Co.

"Everyone loves Dreesen's. You can't get better cake doughnuts," Mr. Meehan said. "Once they try them, everyone comes back for them."

The doughnuts, he said, appeal to a wide audience, but also a meaningful one -- "the old town East Hampton that we were trying to aim towards when we first opened," Mr. Meehan said. "We'd like to keep the tradition alive."