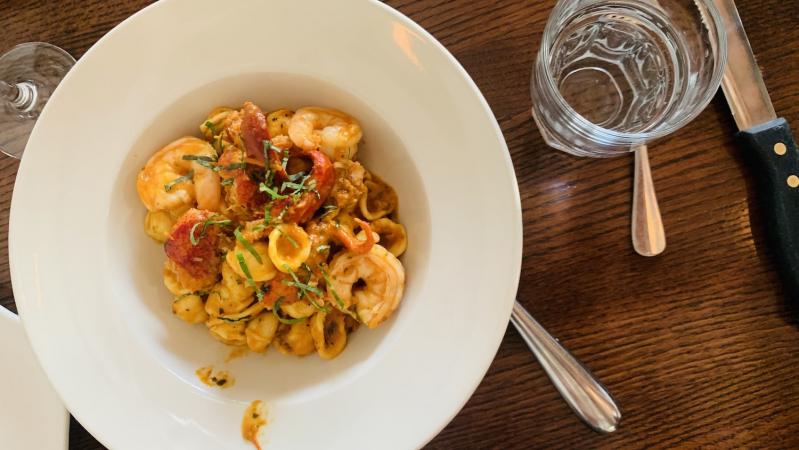 With Covid finally on the run and hopefully in our rearview mirror, Cove Hollow Tavern begins its fourth season this spring in East Hampton.

This tiny house of a structure has smoothly taken the reins from the beloved -- but antiquated and over-priced -- Cafe Max, which held the spot for nearly two decades. Nostalgia aside, it is a welcome replacement. Of course, Cove Hollow is no more a "tavern" than Cafe Max was a place to sip cappuccino and nibble a croissant. What it is is a serious restaurant with seriously good food.

The quality comes perhaps as no surprise, since Cove Hollow Tavern is owned and operated by Terry and Lisa Murphy Harwood, who also own the highly regarded Vine Street Cafe on Shelter Island.

The menu is a blend of Asian, Italian, French, and American, and Mr. Harwood, the chef, seems adept at any genre. The appetizers especially are spectacular. The asparagus and burrata came as three thick-stalked asparagus spears with perfectly charred grill marks, heirloom cherry tomatoes, and basil. The burrata itself was a hunk of melt in your mouth cow's milk cheese, and one of the creamiest I've tasted (the cheese is apparently made somewhere in Brooklyn, though the restaurant declines to say where). A light drizzle of red-wine vinaigrette provided the right balance of acid.

Also excellent was an appetizer special of local scallop ceviche. It was served with a pomegranate pico de gallo and fried banana chips, the pomegranate seeds giving a crunchy counterpoint to the tender, ultra-fresh scallops.

Even better was the firecracker shrimp. In a small basket came a dozen or so small fried shrimp seasoned with sesame, chili sauce, and scallions. Tossed in amongst this were small slices of jalapeno, deep fried as well, which softened the pepper's heat and gave them a lovely crunchy texture. It was a chef's lesson in how to incorporate Thai seasonings on an island where ho-hum shrimp dishes proliferate. The firecracker shrimp are also offered as a rice bowl option, which would include avocado and peanuts, but you may want no other flavors to come in between you and these delicious crustaceans.

Our entrees included a potato crusted bass, which was boat-fresh and succulent. It was served with sauteed greens and a charred tomato-caper sauce.

We went for the large order of the smoked baby back ribs, which were 12 bones and large enough to serve as an appetizer at a small Super Bowl party (we took half of it home). The homemade apple cider barbecue sauce was delightfully tangy, though the ribs' perfect spice rub was almost all they needed. A side of crunchy coleslaw was a perfect palate cleanser.

The Maine lobster orecchiette with Atlantic shrimp was not quite a misfire, but the lobster, mostly all claw meat, seemed overcooked and dry. We eschewed the lobster and concentrated on the plump shrimp, which along with a fresh tomato sauce and slightly al dente pasta made the dish satisfying enough.

The inside of Cove Hollow Tavern has a clean, white, contemporary-cottage feel. The room is small, just six or seven tables with a handful of barstools, and then a few more tables on the graveled patio out front. This made the somewhat slow service more conspicuous. We arrived early to a still-empty restaurant, and drinks (including a great house cocktail called a Yuzu Mule) were slow to be offered and slow to arrive. Servers couldn't be more congenial or eager to please, but there seemed a lack of polish. Finished entree plates sat uncleared for 15 minutes. A dessert arrived without silverware.

First World Problems you say? No doubt. Probably there is some understandable rust from the long Covid layoff. Surely the kinks will iron themselves out as the season gets into gear.

As for desserts, they seemed a bit of an afterthought. Chef Harwood acts as pastry chef as well, and there are only three on offer, along with a few gelatos. This may be by design, as a restaurant this size would probably like to keep the wheels turning and may prefer you didn't linger over dessert. We shared a brie cheesecake, which was good but not as inspired as Mr. Harwood's other offerings.

As for its Covid policy, Cove Hollow is asking guests to wear their masks as they enter or move through the restaurant, unless they voluntarily show their vaccination data. There are a few less stools at the bar, and tables are spaced in accordance with recommended Covid guidelines. This means fewer seats in an already compact restaurant.

This also means you should make your reservations early for Chef Harwood's exceptional eclectic fare.

Just Out — EAST Magazine, exclusively in The East Hampton Star