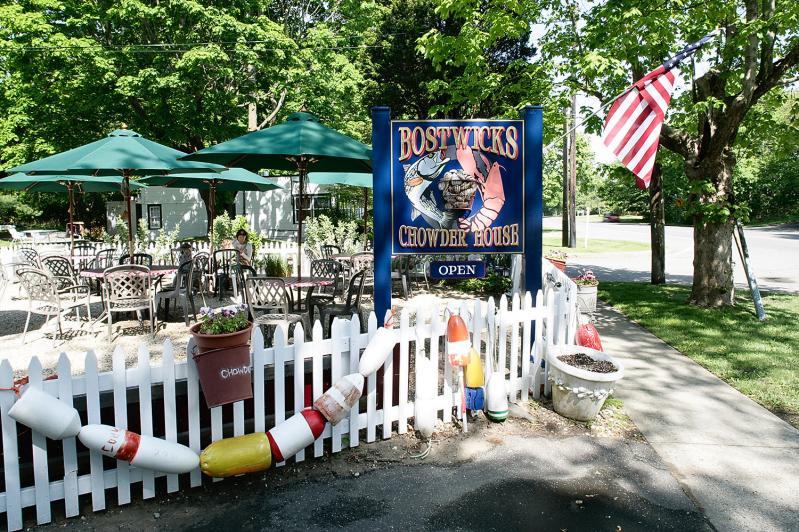 Next Thursday, Bostwick's Chowder House, a seasonal favorite, will open with dine-in and takeout service.
Eric Striffler
By Jamie Bufalino

Open for the Season
Bostwick's Chowder House in East Hampton will open for the season next Thursday with dine-in service and takeout available Thursday through Sunday starting at 11:30 a.m.

Rosie's in Amagansett has reopened and is offering indoor and outdoor dining as well as takeout Wednesday through Sunday from 8 a.m. to 3 p.m.

Passover and Easter
Nick and Toni's in East Hampton is offering a $320 three-course Passover dinner for four for takeout. The menu includes a matzoh ball soup appetizer, an entree choice of slow-braised lamb shanks with apple and fennel or a whole roasted chicken stuffed with lemon and rosemary, wood oven-roasted Brussels sprouts, and a sweet potato puree with maple butter side dishes, and chocolate and coconut macaroons for dessert. Orders can be placed online, and must be picked up on Saturday, March 27, between noon and 4.

The restaurant also offers a weekly two-course dinner for two takeout special. The menu available through Sunday includes an arugula and endive salad and eggplant lasagna for $50, or the same salad with pork Milanese for $60. A ricotta fig cake for two is an additional $18.

Carissa's Bakery in East Hampton has a two-course Passover dinner for two for $150. The dinner special's appetizers include matzoh ball soup, a Sephardic-style haroset with dates, apricots, almonds, red currants, honey, spices, and Cara Cara orange, chicken liver mousse with caramelized Vidalia onions, crispy gribenes, and a hard-boiled egg in a Bibb lettuce cup, and gefilte fish with carrots, frisee lettuce, dill, lemon zest, and beet horseradish. The entree is braised brisket with preserved lemon, Cara Cara oranges, cilantro oil, and jus, and the side dishes are roasted spicy carrots with Aleppo pepper and za'atar on a bed of house-made sheep's milk labneh with cilantro oil, and either herb potato puree with charred spring onions and chives, or smashed potatoes. A la carte dishes include a whole roasted chicken for $40, roasted salmon with tahini and za'atar for two for $46, and whitefish salad for $16 per half pint.

The bakery specials are four chocolate-dipped macaroons for $16, pavlova with blood orange and Meyer lemon curd and berries for four for $24, a flourless chocolate cake with meringue, chocolate pearls, gold leaf, and organic flowers for six for $55, and dairy-free sorbets for $12 per pint.

L and W Market in Bridgehampton has special Passover and Easter menus featuring appetizers, entrees, side dishes, and dessert. The appetizers for Passover include smoked bluefish dip for $12 per half pint, matzoh ball soup for $16 per quart, six deviled eggs for $9, chopped liver for $9 per pint, a $59 crudite platter with hummus and smoked ranch and Caesar dressings, and a $79 cheese board with dried fruit and almonds. A red wine-braised brisket entree that feeds two to four is $59, and one for six to eight is $105. A ready-to-roast whole chicken for two to three is $29. Side dishes include ready-to-cook macaroni and cheese for two to four for $17.99, and roasted potatoes with rosemary, roasted asparagus with Parmesan and mustard vinaigrette, and sweet potatoes with yakitori sauce, all of which are $16 per pound. For dessert, a dozen chocolate and almond macaroons is $27. The full menu is on the market's website, where orders must be placed by next Thursday for pickup on either March 27 between 2 and 4 p.m., or March 28 between 10 a.m. and noon.

The Easter menu features appetizers such as a seven-piece shrimp cocktail for $21, a $79 charcuterie board with pate, an $89 cheese board, and a $49 antipasto with marinated veggies, mozzarella, peppers stuffed with tuna, and olives. A honey mustard glazed ham for two to four is $55, and one for six to eight is $110. A roasted rack of lamb with mint chimichurri sauce for two to three is $80. Side dishes include roasted potatoes, roasted asparagus, roasted beets with Cara Cara orange, smoked feta, and fennel, and sweet and snap peas with spring onions, all of which are $16 per pound, and the ready-to-cook macaroni and cheese. The desserts are chocolate croissant bread pudding for 10 to 12 for $60, and an olive oil lemon cake with strawberry compote for eight to 10 for $42. Orders must be placed by noon on April 1 for pick up on either April 3 between 2 and 4 p.m. or April 4 between 11 a.m. and 1 p.m.

Harbor Market and Kitchen in Sag Harbor has several Passover specials for takeout. A brisket of beef that feeds two to three is $85, and $165 for one that feeds six to eight. A roasted chicken for two to three is $49. Braised carrots with prunes and caramelized onions, and haroset with apples, walnuts, honey, and red wine are $15 each per pint, and $30 per quart. Potato kugel for six to eight is $65. A box of six chocolate-dipped coconut macaroons is $24, a six-inch flourless chocolate cake is $24, and an apple crisp for six to eight is $65. A quart of whipped cream for the cake or crisp is an additional $15. Orders can be placed on the market's website for pickup on March 28 at 10:30 a.m.