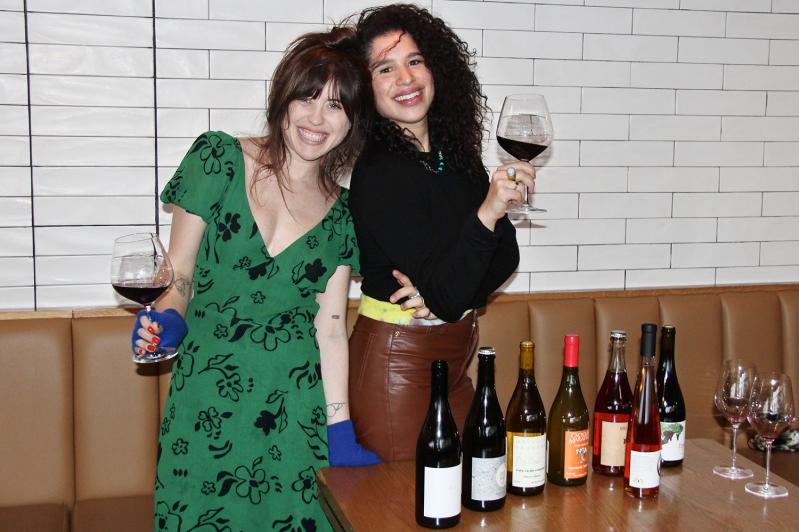 Via Wohl, left, and Stephanie Uribe have combined their business savvy and hospitality experience to start a monthly wine club that promotes natural wines on the South Fork.
Durell Godfrey
By Christine Sampson

The story of Nat Out East is very much a story of female friendship, of abandoned art school degrees and yet-to-be-realized dreams, of unexpected lessons learned from grapes, and of two smart, energetic entrepreneurs. The protagonists of the tale are Via Wohl, a Florida native who now splits her time between New York City and the East End, and Stephanie Uribe, who grew up in Springs and spent five years in Miami, where the friends met, before returning here mid-2020.

Ms. Wohl and Ms. Uribe walked parallel paths before meeting. Both studied art in college, Ms. Uribe on a fashion track and Ms. Wohl with a second major in education, and both knew how it felt to work a double restaurant shift while wearing the wrong type of shoes.

"I don't feel like we've ever been conventional," Ms. Uribe remarked during an interview at Gurney's Resort in Montauk on a recent Friday afternoon. She'd just shared a bottle of Cacique Maravilla's vino naranja with Ms. Wohl and another young woman. Some sediment still remained in the bottle, along with a few last sips of a lively orange wine with a kombucha kind of mouthfeel. It was the perfect complement to an order of avocado toast with bean sprouts.

Both women come from entrepreneurial families with strong female role models. "We've watched people work hard their whole lives," said Ms. Wohl, who is the wine director at Public Records, a music-driven cafe in Brooklyn with serious indie vibes. Before she worked in hospitality, she worked in art galleries.

Ms. Uribe's mother, Luz Carmona, opened the Chiquita Latina grocery and deli in East Hampton in 1993. "Service, hospitality, my whole life revolved around the store. The business is a part of our family, and it inspired me," she said.

In Miami, said Ms. Wohl, the culture of drinking is different because of the non-American influence. "It lends itself more to appreciation -- it's not just 18-year-olds getting drunk drinking Bud Light."

It was where Ms. Uribe tasted a new, not universally known kind of wine -- natural wine -- for the first time. "I said, 'I don't like this. This is weird.' It was too 'farm-y,' it was too deep." Now, though, she drinks no other wine. "It kind of goes with the person I am. I'm very funky and off-the-cuff."

Now, the energetic pair has started their own business, Nat Out East, a wine club that not only offers a biodynamic, drinkable answer to farm-to-table cuisine but also takes aim at the ethics of food and at what many people perceive as a general inaccessibility of wine.

Delivering from Southampton to Montauk, Nat Out East preaches the gospel of natural wines. The venture ramped up over the winter and is just about ready to bust out into the open in the coming summer.

"Natural" wine, Ms. Wohl explains, minimizes additives that mainstream wines and even some organic wines often include. Its grapes are often farmed in line with lunar cycles and other soil mechanics, but always without chemicals. "With education just comes a deeper appreciation of where your wine is coming from, why it tastes the way it tastes," she said.

Ms. Wohl's first taste came in 2018, at wine appreciation classes with Tim Farrell of the Brooklyn Wine Exchange. "He totally opened my mind to the less stuffy world of wine. He's bringing in these amazing producers from all over the world," she recalled. "There was this one affable Dutchman wearing a cowboy hat --"

"These guys are fun," Ms. Uribe interrupted. "They're not faking a French accent or talking down to you. I think that's what we liked. Instead of being like, 'Oh, wine is this untouchable, snooty thing,' we were meeting and hearing these people's stories. Holy shit, this is fun."
In natural wine, sommeliers' credentials aren't mandatory. "It's not hung in a museum. You take it home, you share, you love and laugh with it. It goes anywhere," Ms. Wohl said. "In these old-world wine stores, you're looking at a bottle on the shelf and no one is telling you the fun part. They're just saying, 'What do you want?' We want the facts that are lost in the sauce when it comes to bringing a bottle from the farm to the table."

Natural wines have been hard to find on the South Fork outside of Domaine Franey in East Hampton and the Sag Harbor Liquor Store, which sell some labels. And for several years the Channing Daughters Winery in Bridgehampton has been producing a pet-nat, which is short for petillant naturel, which means "naturally sparkling."

The women now have their sights set on breaking the wineglass ceiling. It's a thing: Do a search for "women in wine industry," and you'll learn it was really only recently in the ancient history of wine that women started to put down roots in the business.

"We're women in a male-dominated industry -- hospitality, where men are grabbing waitresses' asses -- it's happened to me," Ms. Wohl said.

In particular, building a business on the East End was important to Ms. Uribe -- she needed to show that "there is room for me in my hometown. I'm not going to get pushed out."

Here's how it works: Club members choose a package consisting of one, two, or three bottles per month. Deliveries, available starting the second weekend of the month, come with a side dish of education: You'll learn all about your curated vintages in tasting notes. (The details are online at natouteast.com.)

And watch for natural-wine collaborations this summer between Nat Out East and local restaurants and wine shops. Sel Rrose of Montauk will likely be among them. "It was really a pleasure meeting Via and Stephanie and exciting to have more people spreading the love for natural wine in Montauk," its manager, Mike Spyros, said this week. "We got to chatting wines when they joined us for dinner. Their energy, knowledge, and enthusiasm was contagious, and we hope to work with them in some capacity in the near future."

This article has been adjusted from the print version and an earlier online version to address a potential inaccuracy in prices, which have not been finalized as of publication.