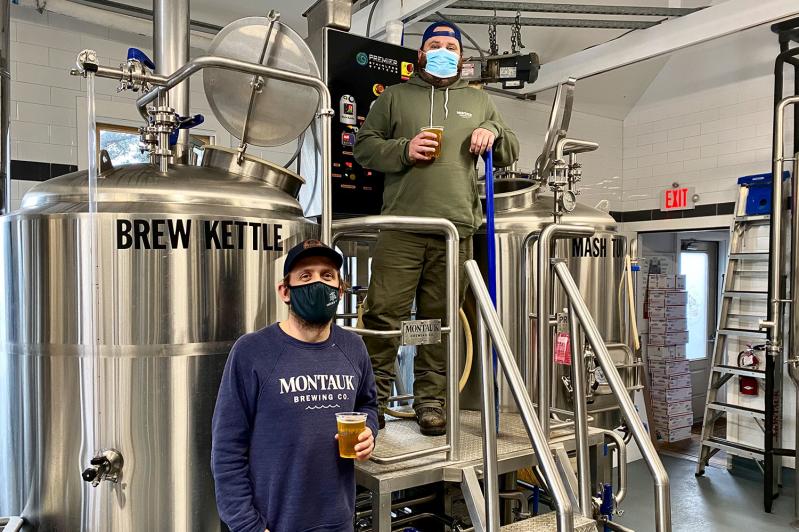 Eric Moss, left, and Stevie Czelatka are planning the release of a number of limited beers this year from the Montauk Brewing Company.
By Christine Sampson

The Montauk Brewing Company's take on craft India pale ale doesn't end at its Wave Chaser and its Cold Day I.P.A., a new seasonal offering that is available until March. The brewery has plans for several limited beer releases in 2021, starting today with the debut of a small-batch I.P.A. just in time for Valentine's Day. It's called Love Is. . . a Cold Beer, and apparently there's lots to, uh, love about it.

"One thing that Montauk Brewing has going on is the beers are all really, really good, but also really accessible," said Eric Moss, a co-founder of the brewery, which has a brick-and-mortar hub on South Erie Avenue. "We don't make beers that only the beer geek is going to like -- they'll appeal to people who aren't only into craft beer, but who appreciate beer that's good."

Love Is is a smooth, mellow, and light-bodied beer with an aroma reminiscent of pine, pineapple, and raspberry, the brewery guys say. Despite a 7-percent alcohol-by-volume content, it's less bitter than many other I.P.A.s.

"It'll have some flavors and aromas that people aren't used to having in an I.P.A. -- new, exciting, and different," Mr. Moss said.

The recipe relies on a particular blend of two hops varieties, Enigma and Idaho 7. They make the jump from the Crosby Hop Farm on the West Coast all the way to the East Coast, landing in the hands of Stevie Czelatka, Montauk's chief brewer.

"They keep us on a short list of cool varieties that not many breweries can get," said Vaughan Cutillo, Mr. Moss's partner in the brewing business. "We haven't seen anyone use that combination of hops, which makes it even more special."

A mobile canning company trucked in its equipment so Montauk Brewing Co. could make quick work of the special release, which took about three weeks to ferment and about three hours to package up.

Better get it fast, though. Whereas the Wave Chaser I.P.A. is always on tap, Love Is. . . will probably sell out in a few days, Mr. Cutillo said. It'll cost you $20 for a four-pack of 16-ounce cans. They can be pre-ordered at montaukbrewingco.com and picked up in-person between Thursday and Monday at the South Erie Avenue brewery.

The beer pros at Montauk recommend pairing this I.P.A. with spicy food, fish, or pasta -- perhaps Korean jjamppong, a red-hot seafood noodle soup. A quick Google search yields hundreds of versions, most of which involve Korean chili paste, anchovy broth, cabbage or bok choy, wheat noodles, and some combination of stir-fried clams, scallops, shrimp, and squid. Such a meal is sure to spice up your Valentine's Day.

Love Is. . . a Cold Beer will whet the appetites of beer lovers for what's to come in 2021, say Mr. Cutillo and Mr. Moss. Look for a new limited-release brew monthly and upcoming charity collaborations -- gotta keep things innovative amid the Covid-19 pandemic, they say -- plus a new staple for its usual lineup.

"We're coming out with an additional core beer that plays in that hazier, lower-alcohol style beer that is really taking off now," Mr. Cutillo said. "We've been testing it for almost a year and we're excited to bring that out in the next couple of months."

They also have their eyes on the day when the pandemic eases and customers can sip pints on the tasting room patio once again. Until then, it's safety first and to-go only at the brewery, Mr. Cutillo said.

But it's safe to say that's fine anyway, with Valentine's Day right around the corner. Netflix and Love Is. . . a Cold Beer, perhaps?