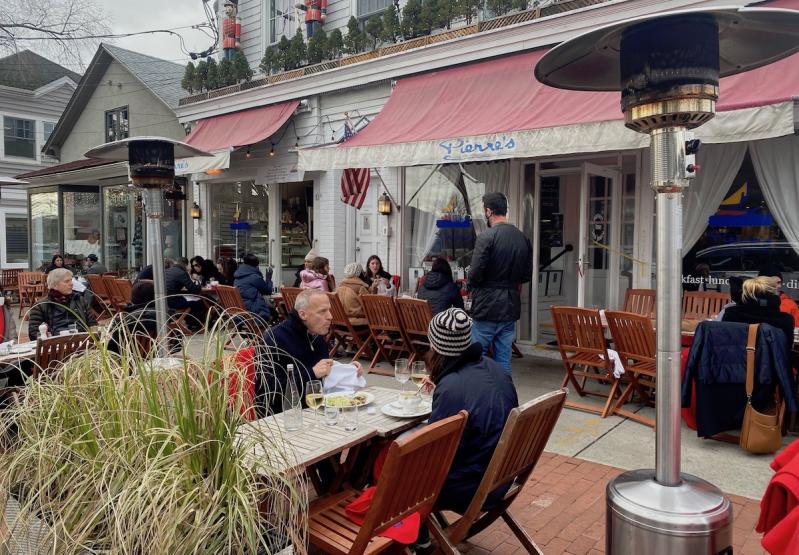 At lunchtime on Jan. 16 it was 46 degrees in Bridgehampton and a line was forming for heat-lamp-warmed outdoor seating at Pierre's on Main Street.
Jamie Bufalino
By Jamie Bufalino

With the use of heaters, blankets, igloos, and fire pits, South Fork restaurants are making outdoor dining a hot winter option for Covid-wary customers.

"It's very popular even on the coldest nights," said Liza Tremblay, a manager of Tutto Il Giorno on Main Street in Sag Harbor. The restaurant provides heat lamps at every table, and has a supply of sheepskin throws for those seeking a bit of extra warmth. The same goes for its sister restaurant in Southampton, she said.

Gurney's in Montauk offers a seasonal menu along with a fire pit and faux fur blankets at open-air bungalows that seat up to six.

The Golden Pear in East Hampton has been forced to adopt a bring-your-own-parka approach to outdoor dining because the heat lamp supply has dried up. "The only U.S. company is out of stock until July 2021," said Keith Davis, the owner. Nevertheless, "customers are still using our outdoor seating and they love it," he said. "There is still great apprehension to sit inside by many customers."

Heaters have been on full blast outdoors at Union Burger Bar in Southampton, Lulu Kitchen and Bar in Sag Harbor, Babette's in East Hampton as well as at all the eateries that make up the Honest Man Restaurant Group including La Fondita and Coche Comedor in Amagansett, Townline BBQ in Sagaponack, and Nick and Toni's and Rowdy Hall in East Hampton.

The pandemic has had a dire economic impact on restaurants, and although extending the outdoor dining into winter provides a much-needed boost, there is a limit to its appeal, said Mark Smith, the C.E.O. of the Honest Man Restaurant Group. "So far, we find below 40 degrees, there's not too much demand," he said. "Even though people at ski resorts are comfortable eating and drinking outside somehow it hasn't translated to East Hampton."

Sen in Sag Harbor has still not opened up for indoor dining, but it has set up plastic igloos and a tent with flaps outdoors. For the comfort of guests and staff, the space closes when the temperature dips below 40, a manager said. At K-Pasa down the street, the recently built deck is closed, but may be available on unseasonably warm days according to its manager. Aside from those days, seating is inside.

At lunchtime on Jan. 16, a Saturday, it was 46 degrees in Bridgehampton and a line was forming for heat-lamp-warmed outdoor seating at Pierre's on Main Street.

There were still a few tables available at that time on the covered veranda of the American Hotel in Sag Harbor, but the seats, along with those in the hotel's back courtyard, are typically hot commodities. "People have been vying for reservations," said Allison Hinson, the maitre d'. No matter how cold it gets, eating outdoors at the hotel will remain an option, she said. "As long as people are comfortable and want to be out there, we'll turn the heaters on."