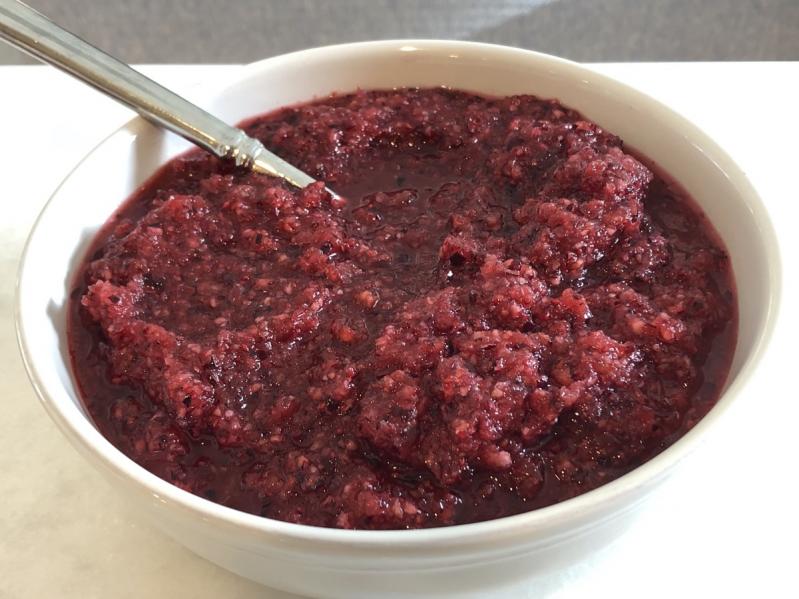 On the second floor of The East Hampton Star's Main Street office building, there's a kitchen where much convivial conversation occurs among the employees. Here is where Jane Bimson feeds dog treats to O'en, Jack Graves's very vocal golden retriever; where Russell Bennett often shares his wife, Fiona's, irresistible baked goodies, and where we take turns filling the Brita water pitcher way above its "max-fill" line.

In short, it's where we bond over food, consciously or unconsciously, and especially this time of year. Here are some of our favorite kitchen conversation starters.

Carissa's Favorite Cranberry Relish
"My mom began making this cranberry relish years ago, and now it's the only one any of us want at Christmas or Thanksgiving," the Star's managing editor, Carissa Katz, said of this recipe from General Electric's "Cooking With a Food Processor" cookbook, published in 1978. "It's tart and not too sweet, and the orange peel adds a brightness that offsets the richness of the rest of the holiday meal."

"Sometimes great recipes come from surprising sources. This one wasn't passed down from generation to generation, but it's been family tested and approved, and I'm sure it will be one of the first holiday recipes my kids ask for when they're all grown up and preparing their own first Christmas or Thanksgiving meals."

Makes two and a half cups.

Position knife blade in food processor bowl with disc above it, shredding side up; shred orange and apple. (My mom peels the orange, and adds in just some of the peel to the relish; you can adjust to taste.)

Remove disc and add cranberries and sugar. Pulse to desired consistency. Refrigerate until serving time. Will keep in the refrigerator for up to a week.

Paul's Preferred Sweet Potatoes
Tasked with recommending a favorite holiday dish, Paul Friese, the Star's production manager, shared a sweet potato dish that's simple and elegant all at once. One need not buy any marshmallows for this one, which was created by Mark Bittman, the bestselling cookbook author and podcaster who for 30 years was a New York Times food writer, reviewer, and columnist.

Paul's advice: Watch that butter closely -- it'll go from "good" to "gross" if left on the heat for even a few seconds too long.

Put oil in a large skillet over medium-high heat. When hot, add sweet potatoes and sprinkle with salt and pepper. Cook, stirring only occasionally, until they change color and begin to brown, then stir more frequently until they are tender but not at all mushy.

Use tongs to remove sage and garlic from butter. Serve potatoes drizzled with butter and garnished with a few sage leaves. Garlic can be served alongside, though it will not be super soft.

Bess's Special Squash Side
Bess Rattray, editor of The Star's East magazine, makes this hot, hearty squash dish she came up with herself on special occasions.

"This is best with delicate, pale butternut squash like those sold at Amber Waves Farm or the Green Thumb, and with excellent apples," she says. "You can reduce this recipe to feed fewer diners by roughly estimating -- it's just equal parts squash and apples and a not-quite-equal part onion."

Preheat oven to 375. Toss ingredients in a large, heavy 9-by-13-inch baking dish. (Not an aluminum baking dish, but cast iron, heavy ceramic, or Pyrex. Ingredients will be slightly heaped, but will bake down.)

Bake for 75 to 90 minutes, tossing in the pan once while baking. This cooking time may seem like overkill, because the squash will be edible and soft by the hour mark, but it is key to cook it longer so the onions caramelize and the whole thing shrinks and sinks a bit.

Unlike her mother and sisters, Christine Sampson, the Star's deputy managing editor, is not a natural in the kitchen. That's why when she successfully pulled off this Cooking Light recipe in 1997, at the sweet age of 16, her mother dubbed it "Chrissy's First Pie." Now solidly in her comfort zone 24 years later, she has been making it at Christmas and Thanksgiving ever since.

Chrissy recommends making a little extra gingersnap mix beyond what the recipe says, so that it fully covers the pie plate. And don't forget the evaporated milk -- we won't get into what happened that one time she accidentally skipped it.

Preheat oven to 325 degrees. Combine first three ingredients in a bowl and toss with a fork until moist. Press into the bottom and sides of a nine-inch pie plate coated with cooking spray. Bake at 325 degrees for five minutes, then cool on a wire rack.

Meanwhile, combine pumpkin and remaining ingredients in a bowl. After the crust has cooled, pour pumpkin mixture into crust. Bake at 325 degrees for one hour or until a knife inserted in the center comes out clean. Cool on wire rack.

Hoedown on the Farm, Cocktails in the Garden
Main Beach Free Concerts in Final Weeks
Services and Counseling After Death of Popular Teacher Assistant
END_OF_DOCUMENT_TOKEN_TO_BE_REPLACED