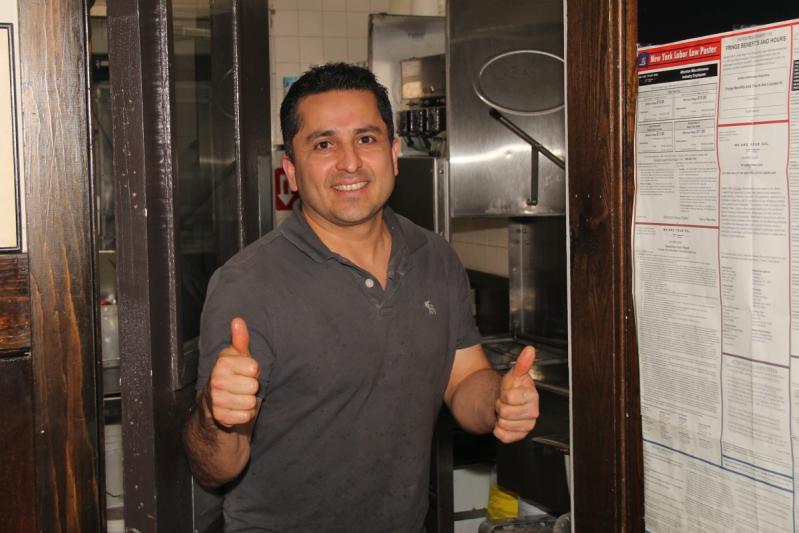 Those worried about the future of John Papas Cafe after the owner's retirement will find the restaurant much the same under the new ownership of Klever Lopez.
Durell Godfrey
By Christine Sampson

Klever Lopez was a fixture in the kitchen at John Papas Cafe for more than 20 years. There he learned everything he knows about the restaurant industry after coming to the United States from Ecuador with his family at age 17.

Twenty-six years later, Mr. Lopez is now the new owner of the beloved cafe. And in an era where so many things in East Hampton are changing, Mr. Lopez pledged that John Papas Cafe will remain "the same familiar place that everyone knows."

Its menu of Mediterranean specialties, American classics, and comfort food "won't change," he said, "but I'll have a few new dishes. It will be a surprise."

Signs in the cafe's windows last week announced its closing for four days, which may or may not have given pause to locals nervously wondering what would become of it. The brief hiatus was necessary so that Mr. Lopez could make the transition to ownership, formally taking over the restaurant's long-term lease as John Papas himself stepped into retirement.

It is his third local venture into food; Mr. Lopez also owns the East Hampton Market on Race Lane and Inter-Deli on Pantigo Road. They keep him busy, but he likes it that way.

"It's great to see all the people I met here. This feels like a family place," said Mr. Lopez, who had left John Papas about six years ago before his recent return.

Last Thursday afternoon he was in the kitchen helping the line cooks with the late-afternoon lunch orders and early-dinner diners. The next day, as he sat and chatted with a visitor, customer after customer offered congratulations.

"I knew him when he was the chef here. He's just a great guy," said Bruce Winter of Amagansett, as he settled into a booth in the back. "I'm very happy for him."

Mr. Lopez's wife, Norma, and their daughters, Christina and Karla, all of whom live in East Hampton, have key roles in their family's business. Karla handles the employees' paychecks and schedules and manages inventory and vendors. Norma and Christina share in the day-to-day management of the three establishments.

In true American-dream fashion, Mr. Lopez worked hard to get where he is. "I wasn't just in the kitchen. I worked doubles waiting tables," he said. "On my days off, I'd do landscaping."

When the business was put up for sale in August, listed at $1.3 million with Compass Real Estate, a local agent alerted Mr. Lopez to the opportunity. He discussed the idea with his wife before signing up.

The main reasons he did so were John Papas Cafe's down-to-earth atmosphere, a menu filled with favorite foods that he himself loves to cook, and, most of all, its loyal clientele.

"They really like it. Everything is staying exactly the same," Mr. Lopez said. "That's what I know. I learned here. Why should we change if people love it?"