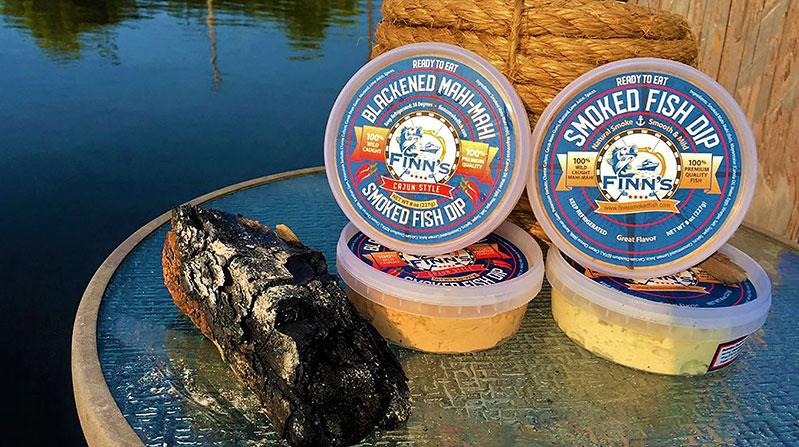 Paul Slovak had a career in advertising, but a passion for fish, especially smoked fish, has been in his blood since childhood. Growing up in East Northport, Mr. Slovak went fishing with his father on Long Island Sound. "He taught me how to smoke bluefish and everything else we would catch," he said. "I got a liking for the product."

After marriage, children, and corporate life, he resumed smoking fish as a hobby a few years ago and began to give his smoked fish dips to friends and family. The shift to making it a business -- Finn's Smoked Fish -- happened in 2017.

"I didn't realize how much learning there was," he said. When he approached the Amagansett Food Institute, now the East End Food Institute in Southampton, he was informed that he had to be H.A.C.C.P. (Hazard Analysis and Critical Control) certified, which he did by taking a course at Stony Brook University. Then the institute's kitchen, where the dips are made, had to be similarly certified for fish processing.

The freshness and sustainability of his product is paramount. In order to have the freshest fish possible, he works with three H.A.C.C.P.-certified smokehouses, one in Stuart on Florida's East Coast, one in St. Petersburg on the Gulf, and one on Coney Island, so that, depending on where the fish are caught, they can be smoked dockside. As the business has grown he has turned the actual fishing over to his suppliers.

He originally envisioned Finn's Smoked Fish as a retail brand and placed the dips with several gourmet chains on Long Island, all of which wanted him to add preservatives to make the product shelf-stable. "They wanted three months. I said I could only give them one." A deal was made, but while doing a store check in one of the accounts he discovered that the sell-by date had been changed. That ended the retail experiment.

He decided to sell instead through farmers markets, which last year included those in Montauk, Westhampton, and East Hampton. In March, he had plans to expand his reach, but the pandemic made that difficult. "We're going to try to reset some of that this year," he said, adding that he planned to be in Sag Harbor, Montauk, and East Hampton on the South Fork, as well as elsewhere on Long Island.

He is also part of the East End Food Institute's virtual farmers market, which operates year-round, but the holiday season, during which he offered home delivery, exhausted his inventory.

Among the many varieties of fish he has processed are mahi-mahi, bluefish, Spanish mackerel, salmon, cod, wahoo, cobia, and amberjack, depending on what's running when. Mahi-mahi and other Gulf Coast fish are smoked over live oak and Florida citrus embers. In addition to its original mahi-mahi dip, Finn's offers a Cajun version that uses a blackened blend of three peppers.

Finn's is not a family name. The Finnish are considered masters of the art of smoking fish, and their methods have influenced practitioners the world over. In addition, while Mr. Slovak and his wife were on a sport fishing trip in Florida, whenever the captain saw fish breaking the water surface, he would shout "Fins!" From those two sources, a brand name was born.

While Mr. Slovak winters in Manhasset, he spends most of his time from May to Columbus Day on his boat in Montauk, traveling daily between that hamlet and Southampton to get the products ready for the weekend farmers markets. He said that during the off-season he would welcome contact via his website, finnssmokedfish.com, from anybody interested in purchasing his products.