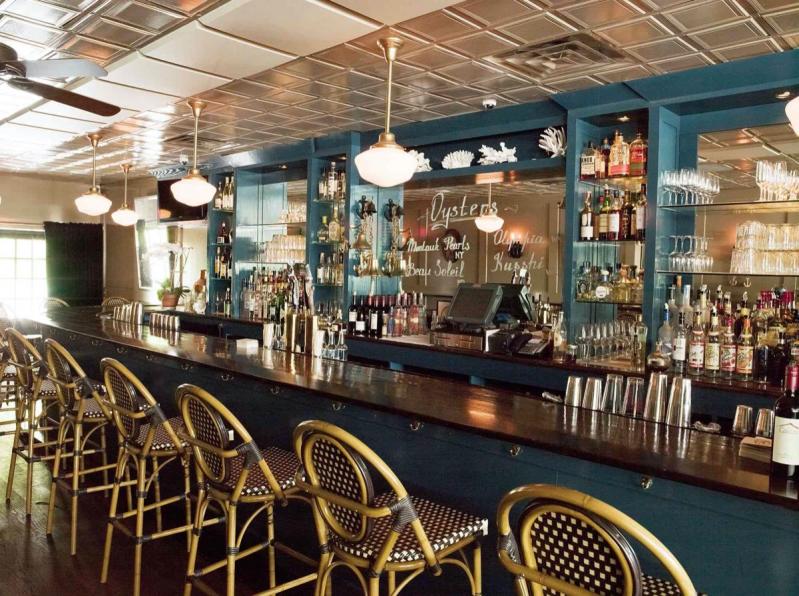 Bell and Anchor has new daily specials for those who dine in the restaurant, including a lobster night on Wednesdays.
Jason Penney
By Jennifer Landes

Set Anchor for Specials
Bell and Anchor in Noyac has begun offering a daily specials menu for Sunday through Thursday for customers who dine in the restaurant. Each special includes a choice of appetizer, desserts can be added for an additional charge.

The week begins with pork Milanese night on Sunday with moules frites on Tuesday. Wednesday is lobster night with a choice of a steamed whole lobster, a lobster tail poached in butter with filet mignon, or in a garganelli pasta dish with corn, basil, and saffron cream. Thursday is bouillabaisse night. The restaurant is closed on Mondays.

Appetizer choices are home port chowder and Caesar or arugula salads. Tuna poke and burrata are also available for an extra charge.

Hometown Heroes
Main Street Tavern in Amagansett has begun a Hometown Hero happy hour on Fridays from 3 to 6 p.m. to honor the East Hampton School District. The tavern will have food and drink specials and offer an additional 20 percent off happy hour specials for all attendees. After a break over the holiday weekend, the event will return on Friday, Dec. 3.

Indian Market
In addition to its daily artisanal South Indian cuisine lunch offerings, the Tapovana Lunch Box at the Bridgehampton Community House has a number of market items that are available all week. Chutney flavors such as mango, apple pear, and date are sold along with frozen items like pumpkin lentil soup, palak paneer, and drumstick sambar. There is also coconut quinoa rice and a few beverage options including warm and chilled chais and a ginger mint lime drink. Prices range from $5 to $18.

A Lovely Lamb
Elaia Estiatorio has a collaboration with Jodi Moreno to offer a special lamb fricassee and tzatziki potato salad entree through Tuesday.

A childhood favorite of the restaurant's co-owner Sofia Crokos, the two partnered on the recipe, adding personal tweaks to the traditional dish. The restaurant notes that the lamb stew is prepared to be healthy and gluten free. It features an avgolemono sauce and kale. The side dish has baby potatoes with fresh herbs and kalamata olives along with the tzatziki sauce.

Just in Time
For Hanukkah, which begins Monday, the LTV (and SunTV in Southampton Town) series "Two Jews Making Food," produced and hosted by Rebecca Edana and Amy Kirwin, will feature latkes through Dec. 4. Although each episode features a food item associated with Jewish culture, half or more of the fun is watching the two mixing it up while they're in the kitchen.

"I Love You a Latke" will be followed by "Kugelicious" from Dec. 7 to Dec. 18, "Ode to Nigella" from Dec. 21 to Jan. 1, and "Let's Get Blintzed" from Jan. 4 to Jan. 15. In addition to scheduled airings, the episodes can be streamed through LTV's YouTube channel.

On the Other Fork
Fall-inspired cocktails might be just the thing to cap off a late autumn drive on the North Fork. The North Fork Table and Inn is offering a few on its bar menu and some recipes for inspiration at home.

The French Apple 75, its take on the classic French 75, is composed of an ounce of Le Verger (a French liqueur derived from apple juice, peaches, cherries, and cinnamon), a half ounce of ginger tea, three quarters of an ounce of lemon, and topped with prosecco in a coupe glass. The garnish is a dried apple with or without a flower. Also on the menu is an autumn sour and a stone fruit old fashioned.

For now and the winter months ahead, the restaurant will have an outdoor Smores + Port option on Sunday evenings on its west patio. At a mini bonfire for two, guests can roast their own marshmallows to place on homemade graham crackers with spicy Aleppo-chocolate bark. A selection of port or Valrhona hot chocolate adds an extra layer of warmth. The $55 special is not available for children.

Manna Mondays
Monday's speakers at Manna at Lobster Inn in Southampton are Aram Terchun and Laura Fabrizio of the Moriches Bay Project. They will discuss the mission and accomplishments of the project. The talk will be followed by a dinner featuring a custom menu designed by Chef Tom Bogia. Tickets to this evening are $100 per person with the proceeds benefiting the project and the Manna Ocean Foundation, both nonprofit organizations.

Hanukkah at Stuarts
Stuart’s Seafood Market in Amagansett has traditional Hannukah dishes such as latkes with applesauce made from Milk Pail apples, jelly doughnuts, jelly croissants, fruit pies, pecan pies, and challah. Orders must be placed ahead of time at 631-267-6700. The market will also host the Jewish Center of the Hamptons Pop Up Hanukkah on Monday at 5 p.m.