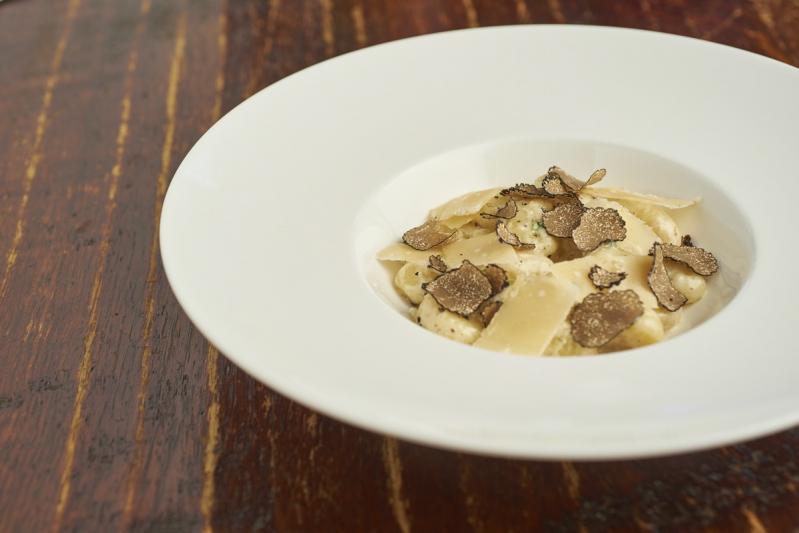 At Baron's Cove, there are new fall menu items such as truffle potato gnocchi, above, fireside dining, and a Thanksgiving menu for dining in the restaurant or taking home.
Doug Young
By Jennifer Landes

More Thanksgiving
L&W Market in Bridgehampton is offering Almond restaurant's Thanksgiving to-go menu of traditional and new-fangled seasonal items as well as hors d'oeuvres such as shrimp cocktail, deviled eggs, lobster roll sliders, and a cheese board. The selections include heritage free-range turkeys in two sizes, 12 to 14 pounds or 18 to 20, plus the traditional stuffings, gravy, and cranberry sauce. There are soup and salad appetizer options and a number of sides from Brussels sprouts with pancetta to mac and cheese, roasted fingerling potatoes, glazed yakitori sweet potatoes, Parker House rolls, sauteed local greens, and roasted heirloom squash. Desserts are Almond favorites like pot de creme, Milk Pail apple crisp, and a chocolate bread pudding. All items are sold a la carte with easy heating and cooking directions, and can be picked up or delivered to the car on site on Wednesday or next Thursday morning. Orders must be placed on the restaurant's website by Sunday.

Smokin' Wolf in East Hampton also has Thanksgiving items to order to go until today for pickup on Tuesday or Wednesday. Whole turkeys are offered with cranberry sauce, gravy, and a choice of sides and pies in three different sized meal packages serving from four to 16 people. Sides include mashed and sweet potatoes, carrots, cauliflower, Brussels sprouts, and broccoli. Pie options are apple crumb, apple, pecan, and pumpkin. There are also assorted cookie platters and appetizer options including salads, an antipasto platter, shrimp cocktail, stuffed mushrooms, crudites, and butternut squash soup.

Fall at Baron's Cove
Baron's Cove has a new fall harvest menu and Thanksgiving options this month for takeout and restaurant dining.

The Sag Harbor restaurant's Thanksgiving menu includes a whole turkey and sides with a choice of pumpkin or pecan pie. The dinner feeds six to eight people and costs $540 per table. There is also a three-course option with butternut squash soup, turkey with cranberry sauce, potato puree, haricots verts, and gravy; stuffed Delicata squash with Dijon vinaigrette, Brussels sprouts, and pepper jam, and sides of stuffing, braised greens, potato puree, and more. The cost is $90 for adults and $40 for children.

The restaurant's take-home options feature a turkey from Beach Plum Farm in West Cape May, N.J., with oven-ready gravy and sides, and a choice of pumpkin or pecan pie. The cost is $350 per turkey, which feeds four people. Turkeys are limited and orders must be placed in advance by calling 844-227-6672.

Over the River
For those whose Thanksgiving plans involve going over the Peconic River (or Bay) and through the woods, the North Fork Table and Inn in Southold and its chef, John Fraser, have a Thanksgiving larder menu available for pre-order to be picked up from the restaurant on Wednesday afternoon or next Thursday morning.

Meals serve four ($250) or eight ($520) people and include a carved roasted turkey, smoked sourdough stuffing, stuffed mushrooms, and butternut squash bisque. A full menu is on its website.

Southold General, Mr. Fraser's new cafe nearby, is offering "everything but the turkey" for busy holiday cooks.

From bisques to spiced nuts and everything in between, it might be worth a drive solely for the Francois Payard pies, which include apple crumb with caramel, pecan and mascarpone cream caramel and bourbon, as well as pumpkin with marshmallow, orange blossom, and fennel pollen. A number of hors d'oeuvres and appetizers round out the more expected offerings of cranberry sauce, green beans, mashed potatoes, and sweet potato casserole. The special holiday items will be available for purchase in the store on Wednesday.

Trio of Cookbooks
Loaves and Fishes has brought out its fall trio of cookbooks to "celebrate the generations of families that feed our communities," according to the store, which sells them at its food and cook shops and on its website.

The book for November highlights Mecox Bay Dairy, owned by the Ludlow family. The farm provides sustainably and ethically raised plant and animal products, including a variety of cheeses made by milk from its cows. The cookbook is designed to use the farm's meat, cheese, and milk in recipes perfect for this month's cooler temperatures.

Feasting on Shellfish
South Fork Sea Farmers will present "Bring a Bi-Valve to Dinner" on LTV on Thursday at 5.

The program will feature the chefs Joe Realmuto and Jason Weiner making their favorite shellfish dishes for the holidays, highlighting simple locally harvested ingredients. Mr. Realmuto is the chef in charge of Nick and Toni's and the overseer of the cuisine of Rowdy Hall, La Fondita, Coche Comidor, and Townline BBQ. Mr. Weiner is the chef and co-owner of Almond restaurants in Bridgehampton, Manhattan, and Palm Beach and the L&W Market in Bridgehampton. The moderator of the program will be Alexandra Talty.

A New Prix Fixe
Sel Rrose in Montauk has a weekday three-course prix fixe meal for $35. On Mondays those in the food service industry will receive a 20-percent discount on their check and happy hour specials that include $2 oysters at the bar.

Celebrate Hanukkah All Across Town and at Home
Stuffed With Turkey? Walk It Off
Blood Drive Tuesday in Bridgehampton
END_OF_DOCUMENT_TOKEN_TO_BE_REPLACED