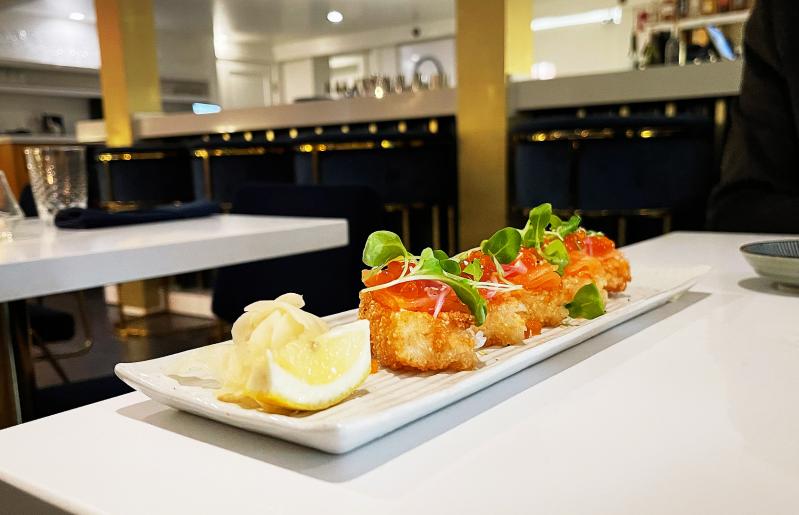 You could argue that 47 Montauk Highway in East Hampton is the graveyard of Asian restaurants. From Bamboo to Shiki to Zokkon, one venture after the other has tried and failed to make the space work for the long haul. Now comes O by Kissaki.

The Kissaki franchise has spread its wings with lightning speed. The original opened in NoHo in 2020, and now there are five branches in the tristate area. The nearby Water Mill location, which has a direct focus on sushi, opened last year to great fanfare. O, by contrast, mixes sushi offerings with robata, a style of cooking that employs slow-grilled skewers and other grilled items. It is also slightly less expensive than its Water Mill sister, where customers may do double-takes when presented with the check.

The first thing you notice upon entering O is the drastic makeover of the dining room. The space is now a neat-as-a-pin Japanese modernism -- you can almost smell the fresh coat of paint. O is all clean lines with a black-and-white motif. Tables are small, however, and very close together. Those still concerned about Covid might try the outdoor patio, which is pleasant but adjacent to the parking lot.

In fact, everything is a little smaller at O, and those used to birdbath martini glasses and hubcap-size dinner plates will have to succumb to a new aesthetic. Cocktails, for example, are exquisite -- and about two ounces less than you're probably used to. We had a Sawayaka daiquiri, which combines rum, mango brandy, amazuke (made from fermented rice), and lime. Even better was the Samuhamu, which blends watermelon vodka, shochu (similar to sake), Lille, and lime cordial. A Momo sour, with peach vodka and sake, was shaken with egg whites and seasoned with cinnamon, giving it the consistency of a brandy Alexander.

We grazed the menu pretty thoroughly, and couldn't find a dish that was less than excellent. Most sublime of all was the crudos. The hotate was raw scallops with shiso oil, razor-thin slices of cucumber, and a tagarashi emulsion (made from Japanese chili peppers), which gave the dish a sharp but never overwhelming spice.

Ever hear of jack fish? Me neither. But you'll want to order it at O. The kanpachi crudo, as it is called here, looks and tastes similar to sea bass, but had a buttery, melt-in-your-mouth texture. It is infinitely more tender than bass, and topped here with slightly over-generous dollops of barley miso. It's so fresh it's as if the fish were alive 15 seconds before it hits your plate.

Carnivores get their just do at O by Kissaki, as well. Shoi koji marinated chicken skewers were nicely charred and flavorful. The tagarashi filet was a spiced beef filet served on a bed of roasted sweet potato. It was surprisingly well-portioned and extremely tender, but the linchpin of the dish is the drizzle of uni butter on top, which gives the beef a briny, buttery accent that is a great foil for the grilled filet. Uni -- the spiky crustacean whose meat looks a bit like brain -- can be divisive; I can almost hear diners ordering the dish with a "hold the butter" caveat. Please, please, resist the impulse. Yes, I'm begging.

The sushi at O is expensive, ranging from $9 to $15 per piece. The best way to navigate this is to order the sampler, which comes at six pieces for $55. The highlight is, no surprise, the otoro, or fatty tuna which is both rich and buttery. The surprise, however, is the aji, or mackerel -- a fish often discarded on sushi plates -- but here having a healthy reddish hue and less brackish flavor.

The Mac oishi roll shows the sushi chef in a mischievous mood. It is topped with Faroe Island salmon -- considered some of the best in the world -- on rice with whipped cream cheese and everything bagel spice. It does come off a bit like smoked salmon on a bagel, with perhaps a little too much rice to appreciate the incredible salmon on top. It's still tasty, and if nothing less, a fun conversation piece.

What to drink with all this? O by Kissaki has an extensive list of sakes by the bottle. If you're not an aficionado, the staff can guide you to a few choices. We went with a glass of the house sake on draft, listed as Blue Door Brooklyn Kura, which was notably creamy with tropical fruit notes.

Dessert? Eh. It can only be a step down after such an inventive, satisfying meal. And it was. We had the strawberry with lemon meringue cream puff. The puff itself was slightly stale and the dessert generally unremarkable.

If you go to O by Kissaki -- and you most certainly should -- you'll probably have more than a few questions for your server. The food is simple and complex simultaneously, with some terminology you may not be acquainted with. Luckily, the servers are both efficient and knowledgeable, and more than happy to steer you through unfamiliar territory.

Opening new restaurants is a tough game, but O by Kissaki seems to have hit the ground running with outstanding food, a sleek new room, and excellent service. Can it navigate the very difficult winter season that is the reality of a Hamptons restaurant? At this price point, and with a sister restaurant close by, it will be tricky. But for now, at least, it has turned this restaurant graveyard into a food heaven.