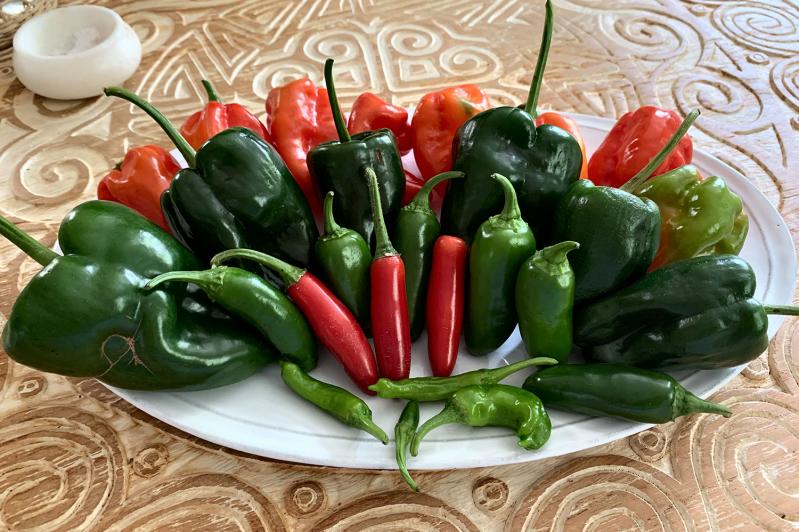 Peppers can be a farmer's favorite crop, because they are incredibly diverse, productive, and easy to grow.
Laura Donnelly
By Laura Donnelly

Let us discuss one of the more common nightshades, one that is as versatile and varied as any vegetable or fruit can be. This would be the pepper, which is a fruit, and has over 50,000 varieties, ranging from the popular and humble bell pepper to the wickedly hot Carolina Reaper.

Some types of peppers grow very agreeably out here and the season just keeps going and going. Shishito peppers, those now ubiquitous restaurant appetizers, love our climate. Shishitos are fun to eat because only about one in 10 is spicy hot, turning that shared bowl of blistered peppers into a game of Russian roulette.

Sweet bell peppers can be grown here with moderate success. I spoke with Rick Bogusch, the grand poobah of Bridge Gardens in Bridgehampton, about which peppers he has had luck with in that famous loamy soil. New Ace and Revolution have been successful but he warned that every year is different.

"This season was hot, and the drought came at a bad time for vegetables and fruits in terms of late ripening. Then the humidity has been terrible for a lot of plants like zucchini, cucumbers, and tomatoes."

Mr. Bogusch has had great success with two kinds of poblanos, early jalapenos, shishitos, serranos, and apple peppers. His favorite discovery this year is a pepper called Roulette Habanero, which has hot seeds but sweet flesh. He shared a few with me and they are fragrant and vegetal. I immediately chopped some up into a stupendous cocktail with lime juice. I may or may not have accidentally added some of the seeds. He suggested adding peppers to any tomato-based stews, sauces, and soups, and likes to stuff bell peppers with turkey, quinoa, and a panade of soaked bread to lighten the filling. He has also made jalapeno poppers stuffed with Manchego cheese and serrano ham. Are you hungry yet?

For a huge variety of fresh, dried, and smoked peppers, stop by Quail Hill Farm in Amagansett and chat with the farm director, Layton Guenther, who I refer to as "the pepper whisperer." They have often said that peppers are their favorite crop because they are "incredibly diverse, productive, and easy to grow." They always keep a winter's supply of smoked hot peppers and frozen roasted poblanos on hand.

I love peppers, especially chili peppers, but I am woefully under informed as to what's what. I generally go by the rule of smaller is hotter (think Scotch Bonnet, Thai bird, serrano) but now there are mini rainbow bell peppers to confuse us all.

The peppers I am most familiar with and that are easy to find at any local farm stand or grocery store are the aforementioned sweet bells, jalapenos, poblanos, and serranos.

Red bell peppers are excellent as an appetizer, grilled or broiled, peeled, seeded, and sliced, then topped with lots of chopped garlic, olive oil, and a tiny splash of good balsamic vinegar. Serve these with some plain goat cheese and Carr's Wheatmeal crackers which are slightly sweet, a good foil for that pungent chunk o' garlic you just bit into! Roasted red peppers also make an excellent pesto combined with Kalamata olives and Parmesan cheese, dolloped onto grilled salmon and steamed new potatoes.

Chilies rellenos is one of my favorite dishes, but who wants to stuff and coat and fry each poblano pepper? Not me. I just layer the ingredients in a casserole, creating the same flavor profile with less work and less fat. You're welcome.

Once smoked, jalapeno peppers are known as chipotles. You should always have a little tin of chipotle peppers in adobo sauce in your pantry. These can perform wonders when stirred into mayo or other condiments. They perk up stews, soups, sauces, chilis, bean dishes, marinades, tacos, and more. One of my favorite uses for chipotles is Bobby Flay's sweet potatoes baked in a chipotle cream sauce. Thanksgiving dinner just got spicy.

Fall is around the corner but there is still so much growing in the fields. Stock up on a variety of peppers and experiment with them. Did I mention they are also high in vitamin C and antioxidants? Here are some recipes to get your imagination going.

Halloumi with Seared Red Peppers, Olives, and Capers
This recipe is from Deborah Madison's "Vegetable Literacy." I love any recipe with halloumi cheese.
Servers two as a main course or four as a first course.

Combine tomatoes, olives, garlic, and capers in a bowl and moisten with four teaspoons of the olive oil.

Heat one tablespoon of the oil in a skillet over high heat. When oil is hot, add the peppers and sauté until softened and seared, three to four minutes. Add them to the bowl.

Return the pan to medium-high heat and add the remaining two tablespoons of the oil then turn off the heat and add the mint and parsley. Season with salt and pepper. Serve sizzling from the pan with the warm bread. This would be good with a green salad and a dollop of harissa on the plate.

Melissa Clark's Rouille for Soupe de Poisson
We live in the perfect place to make Provencal fish soup. This delicious soup/stew would not be complete without some crisp slices of baguette topped with rouille. Here is a recipe for that very essential ingredient, rouille. (In a pinch, feel free to use good mayonnaise doctored up with garlic, saffron, and lemon juice!)

This recipe is from Melissa Clark's "Dinner in French," one of my most favorite cookbooks.

This portion of rouille should be enough for six to eight main-course servings of soup.

In bowl of a food processor or blender, combine the garlic, lemon juice, salt, pepper, and saffron. Let the ingredients sit for a few minutes, then add the egg yolk and half the red pepper, and pulse to combine. With motor running, slowly pour in the oil until the rouille is thick and emulsified. Chill until ready to use, reserving the remaining chopped bell pepper to add to soup later.

When ready to serve, top soup with a toasted baguette slice and a dollop of rouille.

Mandorlata di Peperoni (Sweet and Sour Peppers with Almonds)
This recipe is from an August 1990 issue of Food and Wine magazine. It is simple and delicious, and comes from Basilicata, in the instep of the Italian boot. This would be excellent served with grilled sausages.
Serves six to eight.

In small bowl soak the raisins in warm water for 20 minutes. Drain and set aside.

Slice peppers into quarter-inch strips (you can peel ahead of time if you wish).

In large saucepan heat the oil over moderate heat. Add the almonds and cook, stirring, for a few minutes. Add the raisins and cook one more minute, then stir in the peppers, sugar, vinegar, and salt. Cover and cook 20 minutes. Uncover and continue to cook until the peppers are very tender and slightly glazed, 10 to 15 minutes longer. If peppers stick to the pan, add one to two tablespoons warm water. Serve at room temperature.