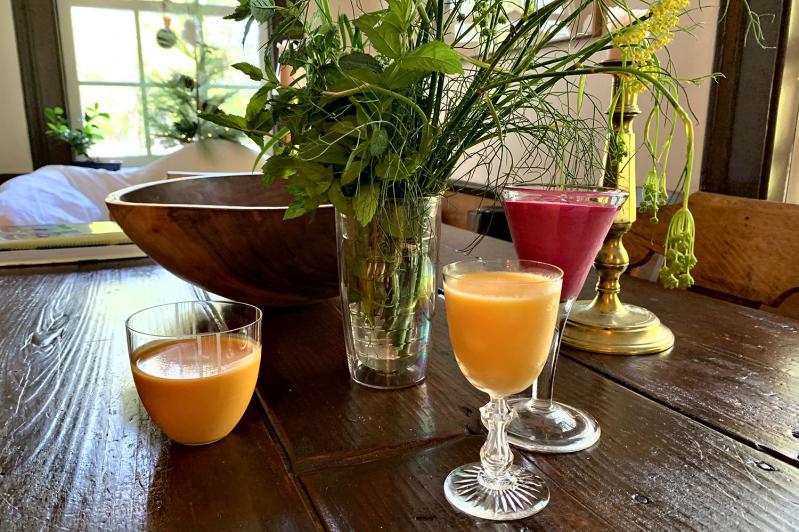 Sungold tomato, cantaloupe, and beet jalapeno are examples of the endless varieties of summer vegetables and fruits that can end up as cold soup on the lunch or dinner table.
Laura Donnelly
By Laura Donnelly

On a recent steamy July evening my friend Kathleen had a most delicious chilled watermelon soup at the Devon Yacht Club. The next morning I got a text: "Have you ever written a column about cold soups?" Bingo! Brilliant idea.

I called my friend Ellen who is a member of Devon, and she got in touch with the general manager, Pat Hollmann, who got the much-praised watermelon soup from the sous-chef, T.J. Hanley. Bingo numero dos!

For the last three days I have been on a cold soup recipe testing tear. Between my Bridge Gardens community plot and farmers markets and farm stands, it has been easy, fun, and very inspiring. Do I even need to mention economical, as well?

I have made vichyssoise, cantaloupe, beet-jalapeño, Sungold tomato, and Ellen's zucchini-basil. Backed up on the runway are watercress, sweet corn, asparagus, minted pea, and cauliflower. I am also experimenting with cold soups that are 90 percent herbs and greens, like peppery arugula with spinach and parsley. Basically, cold soups are sundown smoothies. The possibilities are endless, flavor-wise.

If you have some fundamental knowledge about cooking, taste, and texture, inventing your own cold soups is easy. As I was doing research, I noticed that a lot of the recipes called for onions, garlic, and meat broths to bump up the flavor of blander vegetables, such as potatoes. There was also a lot of overcooking. This is often not necessary, so I stripped down some of them and added vegetable stock instead.

If you like them chunky, you can skip the puréeing of some soups or do half and half, as with vichyssoise (potato leek) and borscht. I'd also suggest using only olive oil if you are not puréeing because recipes that call for sautéing in butter before proceeding with the soup recipe can result in cold butter bloblets once chilled. That is rawther unattrac-tive. However, if you are blitzing the soup, that butter will become nicely emulsified into the silky finished product.

Because they are so easy to make, it would also be a good idea to make two complementary soups and serve them together in each bowl. This can be done by pouring both soups into bowl at the same time from opposite sides. Small pitchers help. Make a swirly pattern with a knife or fork and look at you, you're Joel Robuchon! Zucchini-basil soup paired with Sungold tomato and/or sweet corn? Summer in a bowl. Top with cheesy garlicky croutons for crunch.

I also noticed something else wonderful during the recipe testing. Every time I came in sweating and hot from working outdoors, I'd guzzle some cold soup, such as the beet-jalapeño with yogurt, and would feel instantly better. Turns out these kinds of soups are a superb way to restore lost electrolytes. Dairy products like milk and yogurt, coconut water, bananas, watermelon, and avocados are some of the top foods for restoring potassium, sodium, magnesium, and chloride. The beet soup was based on Maria Loi's "Greek Diet" cookbook beet dip, which I simply thinned with more yogurt.

I figured that to make vichyssoise I should consult a classic, old French cookbook, so I pulled out my "Gourmet's Basic French Cookbook," edited by Louis Diat, published in 1961. Turns out he invented vichyssoise, based on his mother's soupe bonne femme. To say his recipe is complicated and overly fattening would be an understatement, so I didn't follow it at all. I simply sautéed six leeks, added one cut-up potato and cooked them in a combination of chicken broth and vegetable stock. I added turmeric because muddy greige soup is not appealing to the eye. With a splash of cream at the end and a sprinkle of chopped chives, the soup was easier than M. Diat's Ritz-Carlton original and a lot less fattening.

Coincidentally, in the midst of testing and tasting, I got a little container of cold Sungold tomato soup from my Blue Hill at Stone Barns Garde Manger farm box. It was the best soup I'd ever tasted. I could swear it had a rich meaty broth base, it was such an umami bomb. But it was no more than tomatoes, green onion, garlic, and olive oil, cooked briefly. I made a version by roasting some Sungolds with the aforementioned ingredients and it was almost as good. It turns out that tomatoes are full of a free-form glutamate. This provides a natural umami flavor, especially when roasted. Along with their sulfuric compounds, this means Sungolds have more in common with meats than other fruits. This scientific information courtesy of Harold McGee.

The Sungold tomato soup was the only one I strained after blitzing in a Vitamix.

I also tried the cantaloupe soup from the new Ladies Village Improvement Society cookbook, so simple that it is, as I like to say, "not a recipe but a sentence." This was refreshing and easy, but I would suggest less salt and olive oil. The recipe calls for a tablespoon of fine sea salt and half a cup of olive oil per cantaloupe. My friend Ellen's zucchini-basil soup was a favorite. It was light, balanced, smooth, and pretty. Now you know what to do with that overabundance of zucchinis this summer!

There are so many kinds of cold soups from around the world, and some that may have never occurred to us to serve cold.  Wouldn't a cold miso soup be good? Carrot-ginger, avocado-asparagus, fennel, minted pea, red bell pepper, meat broth? You can get fancy with your chilled soups, such as by putting a surprise layer of caviar underneath creamy cauliflower, or topping a sweet white corn soup with a bit of jumbo lump crabmeat or lobster. I'm a homemade crouton freak myself, so this has been my go-to topping. Try whipped cream or crème fraiche seasoned with curry or other spice and use it to top a compatible soup. The possibilities are endless, and our vegetables and fruits are endless right now.

Keep your kitchen cool by making soups in the morning, enabling them to chill up by lunchtime or supper. Another advantage of making cold, healthy, and light soups as the centerpiece of your meal? You can go nuts on dessert. Have that frozen pink lemonade pie, or ice cream and Tate's cookies, you worked hard today!

Here is the recipe that started this column. Thank you to Kathleen, Ellen, Pat, and T.J.!  The proportions are for a big batch, you can do the math and reduce to the size you prefer.  Also remember for all cold soup recipes, you want it highly seasoned, because chilling will dull some of the flavor.
Makes one gallon.

Peel and seed cucumbers. Peel and rough-chop onion. Remove seeds from pepper and rough-chop. Peel watermelon and then rough-chop half and reserve other half.
Place these ingredients into Vitamix blender, blend until smooth, three to five minutes, and then pass through fine strainer and reserve.
Rinse potato rolls with closed fist under water, squeeze all liquid out and place into blender, one-third at a time.  Add yogurt and reserved liquid slowly, drizzling in olive oil, two tablespoons vinegar, and one tablespoon honey. Repeat and adjust to taste.
Process until desired consistency.
Fine or small-dice remaining half of watermelon and add to liquid.  Salt and pepper to taste.

In medium-size pot, sauté leeks and onion in olive oil and butter. Add salt and pepper and cook until softened, but don't let them brown, about 15 minutes.
Add zucchini and broth, bring to boil, and then lower heat and cook about 15 to 20 minutes more, or until zucchini is fully cooked.
Turn off the heat, add the basil leaves and immediately purée in small batches in food processor, Vitamix blender, or pass through a food mill. Can be served hot or cold.

Preheat oven to 400. Put all ingredients in a heavy nonreactive roasting pan in single layer. A gratin dish works well. Bake for about 20 to 30 minutes, until alliums are soft, tomatoes have burst, and bottom of dish looks juicy. Purée the mixture for a minute or two in good blender or Vitamix. Strain soup through fine mesh strainer, using spatula to get as much as you can. Once strained into container, stir occasionally to cool down soup before you refrigerate. Taste for seasoning. Chill and serve!