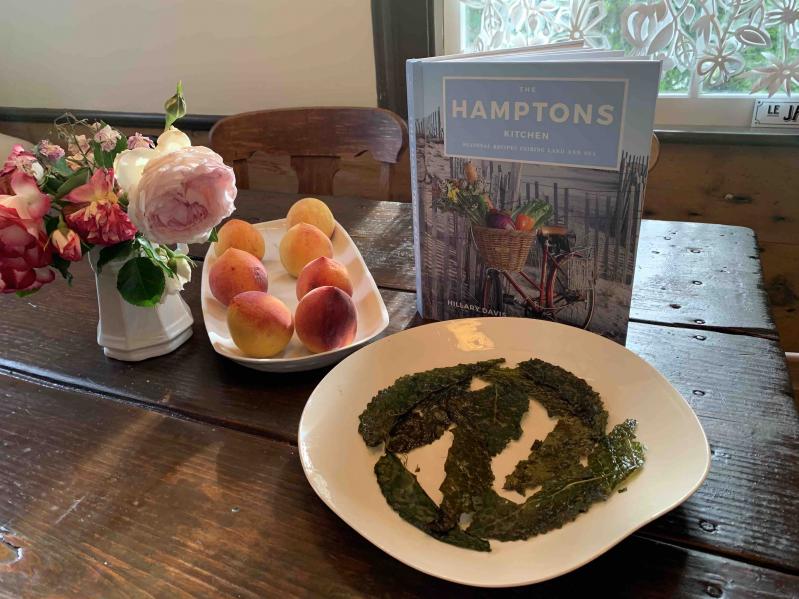 “The Hamptons Kitchen” by Hillary Davis and Stacy Dermont takes a French approach and a farmer’s approach to food, as in its recipe for kale chips.
Laura Donnelly
By Laura Donnelly

As an avid fan of anything food-related and local, it could go without saying that I love East End cookbooks. Most of them, that is. A cookbook written by someone who lives here or someone who is famous and lives here part time and has the connections to get a cookbook published does not necessarily make it good. Or even local.

Of the 50 or so that I have in my extremely organized (not) cookbook collection closet, most are by occasional or full-time residents such as Bobby Flay, Michael Symon, Eric Ripert, and Ina Garten. These are great books by genuine chefs and cooks but aren't necessarily East End-centric. Then there are the occasional celebrity cookbooks: Jessica Seinfeld, Gwyneth Paltrow, Hilaria Baldwin. Some of these are very good; some I give away as soon as I've reviewed them. The truly local cookbooks are my favorites, those by Anna Pump, her daughter Sybille van Kempen, Silvia Lehrer, the Ladies Village Improvement Society, and the 35-year-old Newsday editors' "The Foods of Long Island," which I refer back to constantly for engaging profiles of laymen and farmers.

There is a new one out that instantly climbed into my top five, genuinely regional, favorite cookbooks list. It is "The Hamptons Kitchen," by Hillary Davis and Stacy Dermont (Countryman Press, $29.95). The cover says "seasonal recipes pairing land and sea" but it could have also said "and grapes and hops and spuds," because most of the recipes include beverage pairings appropriate to the flavor profiles of each dish.
Ms. Davis lived for many years in the South of France and has published several cookbooks. This experience and sensibility show in her love of seafood soups and the ability to translate a Cavaillon melon to our local muskmelons. Ms. Dermont, a self-described "Appalachian farm girl," has written about food for Dan's Papers and The Sag Harbor Express for many years.

As a houseguest commented while perusing the book this past weekend, "You can tell these two authors have the gravitas to write such a book, and they clearly know, and are a part of, the place they are writing about." Indeed! Ms. Dermont also happens to be a neighbor in Sag Harbor. I can't exactly say we are friends; we've never sat down for a tisane, but she is the kind of neighbor who drops off onion bulbs and boxes of tea with kind notes.

The book begins with a foreword by Gael Greene, who fondly recalls her frequent visits to "the Hamptons," and briefly residing as a boarder in Ms. Davis's house. When Ms. Greene was flummoxed by a gift of some freshly caught and filleted bluefish one summer, she rang up Pierre Franey, who offered to come over and cook it for her. He blanched and peeled some ripe tomatoes, smashed them up with sauteed onions and garlic, whipped up a mayonnaise, laid the filets down on the tomatoes, slathered them with the mayonnaise and blasted them in the oven.

Ms. Davis wrote the introduction and describes the similarities between the "two Rivieras," which are both "known for their food cultures, artist colonies, and vineyards." Ms. Dermont's experience with regional beers and wines and spirits is demonstrated in the next chapter. She makes the pairing explanations more fun than challenging or confusing, which is the way it should be.

There are sections at the beginning on what's in season, what should be in your pantry, and how to compost. There is also a longer primer at the end of the book on composting, along with local resources and seasonal menu suggestions. The photography throughout is by Barbara Lassen. The photos are evocative and cozily familiar, the food styling simple and chic.

There is also a fine recipe for kale chips, which we made the other night with some homegrown still-baby kale leaves. The recipe is different from most in that it includes a whisper of vinegar before baking and a pinch of pink peppercorns. We all loved them and ended up crumbling the leftover leaves over popcorn before "movie night." Which is, uh, every night. . . .

I can't emphasize enough how helpful and knowledgeable Ms. Dermont's pairings notes are at the end of the
recipes. I know food and cooking; I do not know wine, so I always appreciate help in that department. The suggestion of Sparkling Pointe's Topaz Imperial Brut RosŽ paired with grilled corn on the cob just made my heart sing because I have a membership to Sparkling Pointe's wine club and can't wait to try this simple and summery combination.

Whenever given the opportunity, I pontificate about our region's produce, fish, shellfish, cheeses, and wines going together like the foods and wines of regions in France, Italy, and California. What grows together goes together. Just as a Sancerre or Muscadet goes beautifully with a crottin de Chavignol and oysters, so does Wšlffer's Summer in a Bottle get along with Hillary's fisherman's soup with fresh tomatoes and basil.

There is no waste in this book, no frivolity. Some recipes are somewhat involved and yet made with simple ingredients. This is a French approach, and a farmer's approach: "This is what we have in season, this is what we will do with it to make it wonderful and delicious."

Reading cookbooks cover to cover usually reveals at least a few errors or mistakes or typos or something. This book doesn't seem to have any; it is very well edited. Another aspect that was heartening is seeing a great deal of inclusion of familiar farmsteads (Bette and Dale), recipes (the Montauk fish burger), and the suggestion to readers to go get a clamming license and get out there and dig! You will also learn all about both North and South Fork cheeses and how our waters influence the flavor of various types of local oysters.

To borrow the Latin name of one of Wšlffer's blended red wines, Fatalis Fatum, which translates to "the decision is final," I hereby declare "The Hamptons Kitchen" to be one of the best representative regional cookbooks you could hope to find and use and give. Fatalis fatum.

"The Hamptons Kitchen" Kale Chips
Here's that excellent recipe for kale chips with a whisper of vinegar and a pinch of pink peppercorns. The authors recommend lacinato kale, and suggest pairing the chips with "a light-bodied ale like Montauk Brewing Company Summer Ale."
Serves four.

Preheat oven to 350.
Rinse kale, pat it dry, and place it in a large mixing bowl. Drizzle with vinegar, tossing leaves to coat, and then drizzle with olive oil and toss again.
Spread in a single layer over three parchment-lined baking sheets. Sprinkle with salt.
Bake for about 12 minutes, until crispy. Sprinkle with pepper. Serve at room temperature the same day.