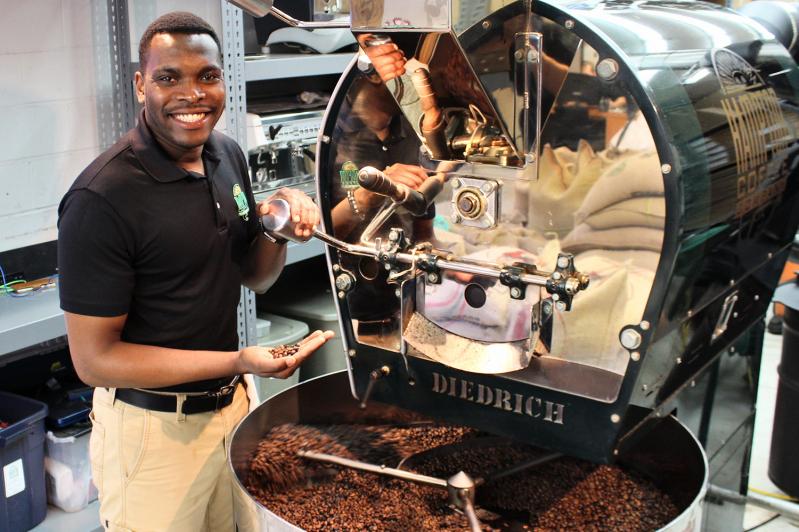 Jason and Theresa Belkin, the founders and owners of the Hampton Coffee Company, whose official 25th anniversary was in November, decided to wait until after the holidays to celebrate in earnest — and to continue celebrating for a whole calendar year.

In a resort economy, with rampant pop-ups and competition from chains, it is quite an accomplishment for a business of any sort to endure and thrive over such a relatively long time.

Hampton Coffee Company’s flagship shop in Water Mill shop is the only one with a sit-down cafe, but its other three locations — in Southampton, Westhampton Beach, and Aquebogue — all offer breakfast and lunch, pastries and panini, as well as salads, all prepared in their own kitchens. Vegan and gluten-free options are available at all the shops. Sandwiches at all the shops are made in Water Mill, as are Mexican specialties, and both are trucked daily to the other locations.

In the coming months, Hampton Coffee Company will open on Main Street in Montauk, and another location is also in the works.

Teachers and students are regulars at the shops farther west, which are closer to schools.

Hampton Coffee Company’s coffee beans are roasted in Southampton. Joe Harris, who is in coffee education and training at the Water Mill shop, said that only two places on the South Fork roast their own beans, Hampton Coffee being one of them, and that doing so gives the coffee “a different taste and freshness.”

Beans are imported from 10 different regions in the “coffee belt” around the equator, Mr. Harris said, including Brazil, Colombia, Hawaii (which has the best quality coffee of all of them), Peru, Kenya, Guatemala, Ethiopia, Sumatra (which has low acidity and is good for people who have trouble drinking coffee), El Salvador, and Costa Rica.

The Belkins have a direct trade arrangement with a partner who makes the connection with groups of small farms. In countries without that connection, there is a broker. Climate change and sustainability are now big topics because of how the variability and fluctuation of the weather affect coffee production. If it is too hot or too cold, “you can lose a whole crop,” said Edythe Collins, who heads up the public relations and marketing for the company.

Key to the business’s success, Mr. Harris said, is the fact that Mr. Belkin makes it a point to hire friendly and outgoing people who live in the area.

Another strength of the shop is promoting from within, said Ms. Collins, who is herself such an example. She started working as a waitress while still in high school, showed interest in the management side, and soon was an intern, ultimately becoming the head of public relations and marketing for all the shops, including the two that are opening soon. “In an environment that has so many trends,” she said, “we stick to uniqueness and consistence, the founding principles. We like to hire local and have about 60 employees altogether year round.” The shops are open every day but Christmas.

She worked all the angles of the business while studying communications and media at Stony Brook University for three years. “I was groomed for the role” of the head of the marketing department, she said, adding that “hiring and promoting from within . . .  make the whole staff a family, top to bottom.”

And Ms. Collins also got to see the business from the coffee bean production side, going on a trip to Colombia to visit coffee farmers.

To celebrate its anniversary this year, the company is offering a selection of limited edition retail items, including an anniversary coffee, the Water Mill Blend, which comes with a special scoop. It kicked the year off with a sweepstakes on Instagram allowing one person to win two pounds of coffee a month for a year. The winner was Jonathan Cobb of Manhattan, but people from as far away as Florida entered the sweepstakes, and the shop even got an international request.

In the next 10 months the business will hold other contests on social media and offer more retail items. Like its existing shops, the new ones will serve hot breakfast and lunch, with pastries and soups on offer. “Our branding and the voice of the company are so consistent,” Ms. Collins said, and with the new shops, “we plan to stay true to the founding principles, year round, slow and steady.”