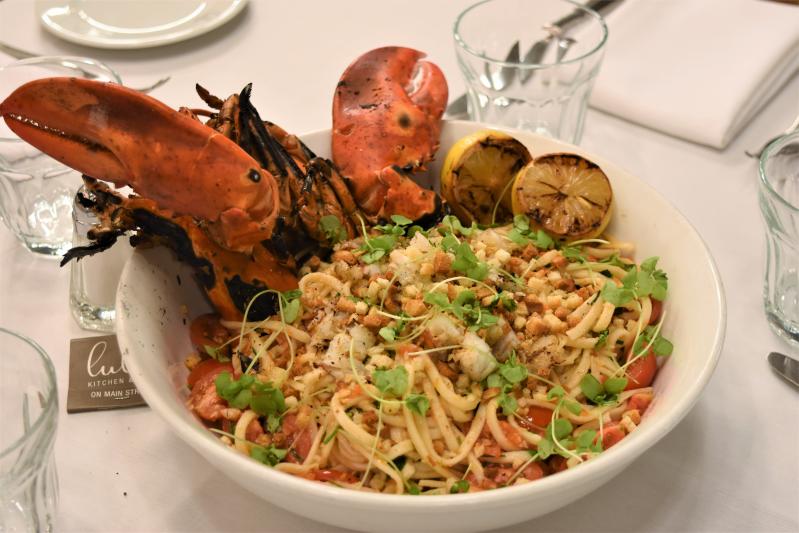 Some of this week's holiday-themed meals to go at Lulu Kitchen include this lobster pasta entree for two.
By Jamie Bufalino

For New Year's Eve
Lulu Kitchen and Bar in Sag Harbor is offering two three-course holiday dinners, a la carte dishes, appetizer platters, and more for takeout this week. The dinners are $250 for two, and $475 for four, and come with shrimp cocktail, oysters on the half shell, baguettes, a black forest Buche de Noel, and a choice of either a beef Wellington entree with rosemary mashed potatoes, ratatouille, and chestnut and foie gras soup, or a smoked salmon plate with mussels, lobster pasta, and garlic kale.

A platter that includes charcuterie such as prosciutto de Parma, duck prosciutto, Armagnac mousse, head cheese chicken liver, and the cheeses Tomme de Savoie, Truffle Tremor, aged Gouda, and gorgonzola dolce cheeses is $42 for two, and $84 for four. Canapes such as tuna tartare, mini grilled cheese and tomato confit, sauteed escargots, and mini crab cakes are $36 per dozen. A Petrossian Royal Ossetra caviar platter with potato blinis, egg yolk, egg white, chives, shallots, and creme fraiche is $135. A raw bar platter with oysters, top neck clams, tuna tartare, shrimp, and crab is $95 for two, and $125 for three, and chilled lobster can be included for an additional $31. A la carte dishes include lobster Cobb salad for $67, a two-pound lobster for $72, a whole chicken for $42, lobster pasta for $84, skirt steak for $76, a rack of lamb for $96, a whole snapper for $125, and a 40-ounce ribeye for $130. Meal orders must be placed two days in advance, and orders for canapes and a la carte items one day in advance.

A New Year's Eve menu at Nick and Toni's will be available as a $135 three-course prix fixe for those who dine at the restaurant or a la carte for those who order to go. Antipasti items include wood-roasted oysters for those eating at the restaurant, salad, burrata with roasted beets and toasted pistachios, octopus with chorizo and fingerling potatoes, a foie gras torchon, or tagliatelle. Some of the second-course choices are ricotta ravioli with pumpkin crema, wild mushroom and white truffle risotto, porchetta with fermented black garlic aioli, chicken with black truffles and polenta, and Wagyu strip steak with cauliflower mash. For dessert, there is a choice of Valrhona chocolate tarte, apple and cranberry crostata, pistachio and cherry trifle, tartufo for two, or gelati and sorbetti.

A children's menu is $65 in-house with starter choices including salads and meatballs, mains of ravioli, striped bass, chicken, or steak, and the same desserts. Kid-friendly takeout items on offer will be chicken tenders, margherita pizzettes, and macaroni and cheese.

The prix fixe for adults includes a glass of Marc Hebrart Extra Brut Rose with dessert. There will be early and late seatings, for which reservations are suggested, and takeout will be available from 5:30 to 8:30.

At the Bell and Anchor in Noyac, New Year's Eve specials will be available in addition to the regular menu and there will be $1 Montauk Pearl Oysters, $12 glasses of prosecco, and $15 glasses of champagne.

Almond in Bridgehampton has a four-course prix fixe dinner for $125 per person starting at 7 p.m. The menu features appetizers such as ahi tuna poke and roasted scallops, and the entrees include lobster cassoulet, steelhead trout in a misoyaki sauce, and, for an additional $75 charge, Wagyu strip steak. A spinach and sunchoke dip will be offered as a shared dish, and the desserts are champagne cheesecake with lemon curd, candied zest, and Meyer lemon crema, and an assortment of chocolate truffles. A champagne toast will take place at 9 p.m. The a la carte menu will be available prior to 7, and a snack menu and specialty cocktails will be offered at the bar.

The Old Stove Pub in Sagaponack has a special $75 takeout dinner that includes soup or salad, an appetizer, entree, and dessert. The menu features entrees such as sauteed scallops, lamp chops with roasted vegetables, and broiled salmon.

Union Sushi Steak in Southampton is offering a four-course dinner for $125 per person with two hours of an open bar, or $85 without. Reservations are required, and can be made via the restaurant's website.

The 1770 House has a $125 prix fixe dinner that includes two appetizers and an entree, plus a glass of Billecart-Salmon Brut Reserve champagne. The menu features appetizers such as acorn squash and buttermilk bisque with venison, preserved cherry sausage, and curried pepitas, and roasted quail with bacon-and onion jam, escarole, and a tart cherry sauce. The entrees include halibut with wild chanterelles, leeks, fingerling potatoes, and a lobster emulsion, and braised beef short rib with roasted cauliflower purée, Brussels sprouts, marrow and herbs.

Cooking Class
Stefanie Sacks, a culinary nutritionist and the author of "What the Fork Are You Eating?" will lead free online cooking classes at 5:30 p.m. on Wednesdays. This week, the dishes will be an untraditional Caesar salad,  butternut squash risotto, and herb-marinated chicken. Participants must register by the Sunday before class at stefaniesacks.com. A shopping list will be emailed upon registration.

This article has been modified from its original and print version to include announcements of New Year's Eve specials received after the paper went to print.