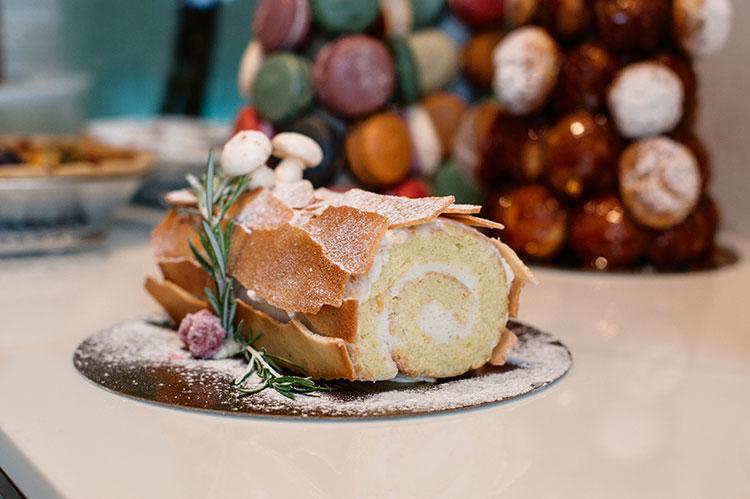 Hello students, welcome to Holiday Baking Part Deux. Please silence the ringers on your cellphones, wash your hands thoroughly, and let us begin.

Roland Mesnier was the White House pastry chef for 26 years, beginning in 1979 when he was hired by Rosalynn Carter. He worked through the Carter, Reagan, Bush I, Clinton, and Bush II administrations. His book "Dessert University," written with Sag Harbor's own Lauren Chattman, is an excellent resource for the basics and the more complex aspects of desserts and baking.

He begins his book with his five golden rules. They are: "learn the basics and then practice, practice, practice, respect the classics, value economy and simplicity, focus on flavor," and lastly, "be an artist: develop your talent."

"Learn the basics and then practice, practice, practice" is one of the most important pieces of advice. Have you ever used a familiar recipe for a cake or meringues or a cheesecake that all of a sudden didn't work? It could be measurements, freshness of ingredients, humidity, temperature, so many possibilities. But don't be daunted by little, or even big mistakes.

One of the most diverse doughs for baking all kinds of sweet and savory pastries is called pate a choux. From this dough you can make cream puffs, profiteroles, eclairs, croquembouche, fancy swan pastries like on cruise ships, Paris-brest, crullers, beignets, and churros. (I tried constructing a croquembouche a few years ago, but it looked more like Richard Dreyfuss's Devils Tower of mashed potatoes in "Close Encounters of the Third Kind.") You can practice your piping skills with no more than a large Ziploc bag with the corner snipped off. It is an easy dough to make, you simply have to follow the directions. To pipe the wettish dough, you should probably watch a demonstration video.

When I used to make profiteroles for the late great Laundry Restaurant in East Hampton, the naughty managers referred to them as "profit rolls" because they were so popular and so cheap to make. I would fill them with housemade vanilla ice cream and drizzle them with some warm bittersweet chocolate ganache. If I had time I would also make eclairs, one of my favorite pastries of all time. Half of them would be classic, filled with vanilla pastry cream and topped with a chocolate glaze, the other half flavored with espresso in the pastry cream and the confectioner's sugar glaze.

Ninety percent of recipes you will find for pate a choux call for making the dough with water. No! Do as the Silver Palate and Mssr. Mesnier suggest, make the dough with milk. The pastries will taste richer and will brown more attractively. Another trick, which I made up myself, is sticking a straw into one end of each eclair when they have almost finished baking. This allows the interior to dry out and crisp up a bit like the exterior. I like an eclair to be sturdy and crisp because it is going to soften up rapidly anyway once you fill it with whipped cream or pastry cream. If you are making cheesy gougeres with the dough, you wouldn't want to do this, you want the interiors to be moist and eggy, like a popover. Empty eclairs, profiteroles, and gougeres freeze beautifully by the way.

For more durable, less perishable holiday baking, you could make cinnamon or sticky buns from scratch. For a classic shortcut on buns, you can find recipes online that utilize frozen bread dough and vanilla pudding mixes. They're not bad!

A slightly more complex pastry is an Alsatian dessert (or breakfast) called tarte a la cannelle, which is similar to kugelhopf, brioche, kokosh, and babka. Many of these yeasty buttery delicacies overlap around the world. Try your hand at some of these pastries, from simple to sophisticated.

Pate a Choux
This is based on Roland Mesnier's recipe from his book "Dessert University."
Makes enough choux paste for about 24 eclairs, 24 cream puffs, or 110 small petit four size puffs.

Preheat oven to 425. Combine milk, butter, salt, and sugar in a large saucepan and bring to boil. (My note: use a sturdy thick saucepan.) Take off heat and immediately stir in flour all at once, using a wooden spatula (I think they mean spoon.)

When the flour is dissolved and the mixture is smooth, return the pan to the heat and cook, stirring constantly, for one minute. The mixture will be quite thick, like dry mashed potatoes.

Transfer mixture to bowl of electric mixer fitted with paddle attachment. With mixer on low speed, add the eggs, one at a time, mixing until each is just incorporated and scraping down the sides of the bowl as necessary. Put the pate a choux paste into a pastry bag and pipe to desired shape and size. Bake according to whatever recipe you are following, which will most likely have you start at a higher temperature, then reduce temperature to finish.

Once pastries have cooled, you can poke holes or slice partway into them to fill with whipped cream, ice cream, pastry cream.

Tarte a la Cannelle
This recipe is from Food and Wine magazine 1991.
Serves six.

In mixer fitted with dough hook, combine milk, sugar, and yeast. Beat in one cup flour and salt. Beat in the egg until thoroughly combined. Beat in another three-quarters cup of the flour. The dough will be quite soft and a bit sticky. Add the remaining two tablespoons of flour, if necessary to form a soft dough that does not stick to the dough hook or the sides of the bowl. Knead the dough at medium speed until elastic, about five minutes.

Gradually knead in the butter at medium speed until incorporated, about two minutes. Continue kneading five minutes longer. Cover the bowl with a damp towel and set aside in a warm place until dough doubles in bulk, about two hours.

Lightly butter and flour a 9-by-3-inch springform pan. Lightly dust your hands with flour and punch the dough down completely. Transfer the dough to the prepared pan, pressing it to the edge of the pan. Cover loosely and set aside in warm place until the dough rises to just below the rim of the pan, about one and a half hours.

Sprinkle the cinnamon on top.

Bake in the middle of the oven for 35 minutes, until golden and puffed. Let cool on a rack for 10 minutes. Gently remove the sides of the pan, cut into wedges and serve warm.

Yukon Gold Cinnamon Rolls
This recipe would be fun to make with some local potatoes. It is from a March 2009 issue of Bon Appetit.
Makes 12.

Meanwhile, pour half a cup of warm water into large bowl of stand mixer fitted with paddle attachment. Stir in yeast and sugar. Let sit until foamy, about 10 minutes. Add potato mixture to yeast mixture, and mix on low speed until well blended, about two minutes. Mix in three cups flour, a cup at a time, beating well. Beat until sticky dough forms.

Spread half a cup of flour on work surface. Scrape dough onto surface and knead until dough is smooth and elastic, about eight minutes, adding more flour by tablespoonfuls if dough is very sticky.

Coat a large bowl with butter, transfer dough to bowl, and turn to coat. Cover bowl with plastic wrap, then kitchen towel. Let rise in warm place until doubled in volume, about one hour.