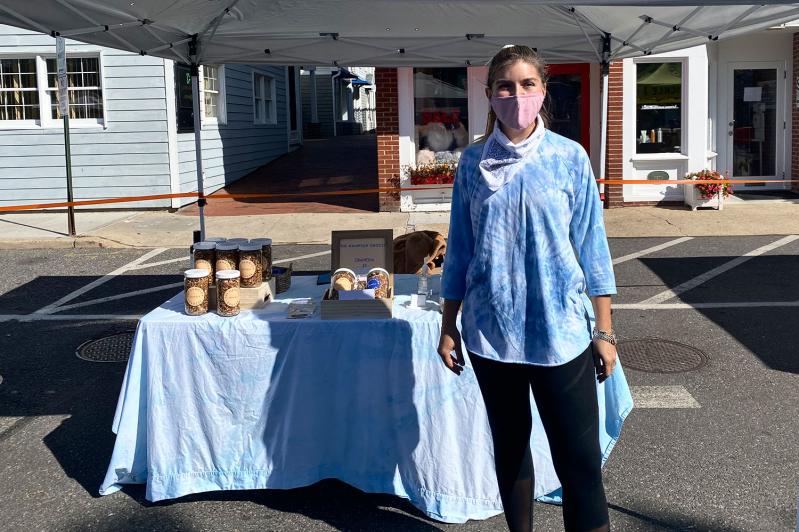 Samantha Perlstein at her booth at the East Hampton Farmers Market earlier this month.
Jamie Bufalino
By Jamie Bufalino

After the pandemic put an end to her career as an event planner in New York City, Samantha Perlstein quickly cooked up a plan B and launched a healthy, high-end brand of granola that's been selling out at East End farmers markets.

In March, when the restaurant group she had worked for notified her that it was closing its businesses in the city, "My immediate reaction was, 'What the hell am I going to do?' " said Ms. Perlstein. "My job was events, and not only events but events in restaurants specifically, so that was like a double whammy."

She and Andrew Perlstein, her fiance at the time, also had to cancel the destination wedding in the Dominican Republic they had planned for April 18, the third year anniversary of their first date. Still eager to get married on that special day, the two had a ceremony in her parents' backyard in New Jersey.

They moved full time to Montauk, where Mr. Perlstein's family has a house, and Ms. Perlstein started to forge a new career. "I needed to cast my net really wide and see what sticks," she said.

She enrolled in an online health coaching course offered by the Institute of Integrative Nutrition, and, in an effort to establish a future clientele base, she offered her produce-picking services to those who were housebound because of the pandemic. "I thought, okay, I'm in this health coaching school, I'm a really good cook, why don't I shop for families in the Hamptons who want fresh local produce and that will be my way of meeting people."

She segued into selling gift baskets and decided she needed to include a product of her own. "Granola was the natural choice because there's always granola in my husband's parents' house because his mom is always making granola," she said. "Her granola recipe was quite different because most granolas have a ton of oats, this one is packed with nuts and seeds, and dried fruit. Lots of protein and healthy fats and no refined sugar. It's also naturally gluten-free."

Her granola is available in one-pound jars for $22 and refill pouches for $20. It comes in two standard flavors, dried cherry and cinnamon, and cayenne and rosemary. (She sold out of the latter at the last day of the Springs Farmers Market on Saturday.) She has also made limited edition, seasonal flavors such as pumpkin spice, and plans to make a chocolate and coconut version for Halloween.

The products are available at the East Hampton Farmers Market, Amber Waves market, and Vickie's Veggies in Amagansett, the Sang Lee farm stand in Peconic, and, thanks to her father, who loaned her $2,500 to set up a website, at thehamptongrocer.com.

The response from customers has been extremely positive, she said. "Repeat customers keep buying it, and they're buying it for somebody else because they love it so much."

"Whenever I get an order it makes a cash register sound on my phone," said Ms. Perlstein. One night this summer, the phone was ka-chinging like crazy after Katie Lee, the chef and Food Network host, featured her granola in an Instagram post. "As soon as she posted it, I had over 50 orders," she said.

These days, she makes about 150 pounds of granola every week in the kitchen of TT's restaurant in Montauk, and she's looking ahead to holiday sales.

"Right now I'm investing in really nice boxes for shipping, so it feels a little more luxurious," she said. "At $22 a jar, it is a luxury product for sure, but it's better than the granola you find in stores that are mostly oats with three raisins and four cashews. I want people to feel like this is an item that's worth sending to people for the holidays."