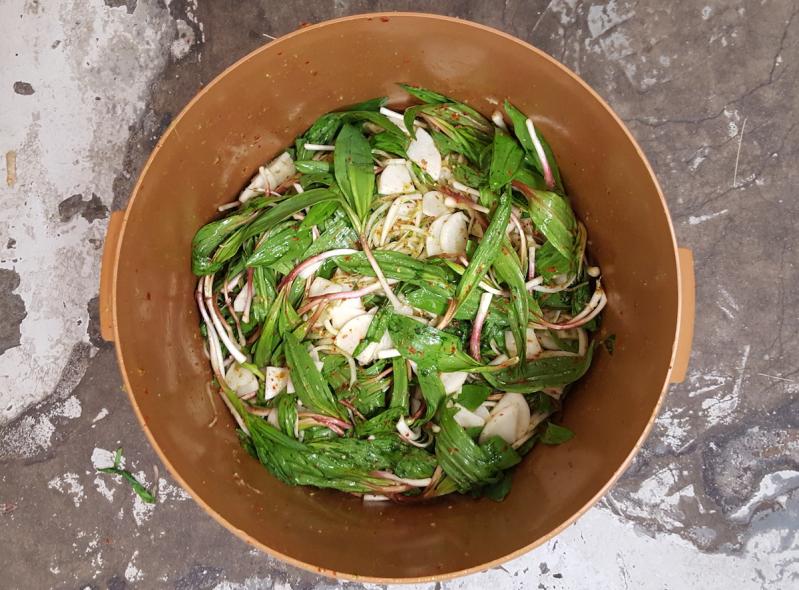 It's ramp season. Huzzah! But don't blink, because before you know it, this wild, elusive allium will be gone.

What the heck are ramps, some of you may ask. Ramps are a wild leek with a hint of garlic. They look like scallions but with a pretty purple/burgundy tint toward the bulb, and flat green leaves similar to lilies of the valley. The broad leaves can be one to two inches wide and they can grow from four to 12 inches long. They are rare, fleeting, and seasonal, hence hugely trendy.

I'd never heard of, nor seen, ramps until about 15 years ago. Same with garlic scapes, which by the way will be the next springtime frenzy-worthy veg, along with fiddlehead ferns and morel mushrooms.

Ramps, Allium tricoccum, are also known as wood leeks, wild leeks, and ramsons. They grow well in the wild at high elevations in eastern North America from Georgia to Canada. In Appalachia, they are celebrated with many festivals in April and May.

Sadly, ramps are on Slow Food's Ark of Taste endangered wild allium list because their seeds are difficult to germinate. To sustain a crop, only 10 percent of a patch should be used every 10 years.

The seeds take six to 18 months to germinate, and the plants take five to seven years to produce the seeds. Each plant only produces three seeds, hence the Latin name "tricoccum." Since 1995, the foraging of ramps for commercial use has been illegal in Quebec.

Although our farmers markets haven't opened yet, I did see ramps at Citarella, and if you've got some savvy chef buddies, I can assure you they've found sources for ramps. What do you do with them once you've gotten your hands on them? Just about any recipe that calls for leeks, scallions, or garlic would be compatible with ramps. Think pasta, eggs, compound butters, stir fries, greens, grits, salads, soups, pork, asparagus, fish, and chicken. They are very perishable, so you should use them within a few days of finding/foraging. You can easily freeze them or pickle them if you have an abundance.

I have a gazillion cookbooks and food encyclopedias but only one mentions ramps: Deborah Madison's "Vegetable Literacy." Even she admits she was flummoxed by her first and only encounter with them. My "Oxford Companion to Food" went straight from ramontchi (Indian plum) to rampion (16th-century weird radish situation), so there's not much information out there historically.

I made the mistake of using my entire two bunches of ramps to make pesto. This is akin to making pesto with only the garlic. No basil or cress or parsley or whatever other leaves that would temper the pungency. Damn you, internet!

Some resources suggest peeling off the outer layer, as you would with scallions or leeks. My ramps were so thin and tender and fresh, it wasn’t necessary. Thank goodness, because if I had attempted this, I would have been left with nothing but a few fragrant strings. As I pureed them with a few toasted pine nuts, Parmesan cheese, and olive oil, I got a full blast of sulfuric acid, hydrogen sulfide, and sulfur dioxide, a molecular bomb known as "the lacrimator." This is the substance that makes us cry when peeling or chopping onions, and it protects the various allium plants from animals. I used the pesto judiciously on seared tuna, brown rice, string beans, and penne. I also froze some to mix into ricotta or goat cheese for an appetizer. The pesto was delicious on everything (in small doses) and I learned an expensive lesson. Next time I will simply sauté some of the leaves and mix them into scrambled eggs or stir them into some cheesy grits and sauté or grill the bulbs for more aggressively seasoned dishes.

Ramps have been popular in the Appalachian Mountains forever and West Virginia is considered the heart of ramp country. Their preferred habitat is sandy, loamy, moist soil, and they can be found near streams and under trees such as beech, sugar maple, poplar, hickory, oak, and birch. It is illegal to forage in both United States and Canadian national parks. Some botanists and environmentalists suggest picking one leaf per plant and leaving the bulb and baby leaves intact to continue growing. Enjoy that. No wonder they’re so sought after and expensive!

It’s too late to skedaddle down to West Virginia for the New Life Church, Pickens, Faith Gospel, Helvetia, Feast of the Ramson, Ramps and Rail, or Stinkfest festivals, but ramps are still available locally from a few sources. Enjoy the fleeting season of this wild allium, the most fragrant sign of spring.

Go ahead and make pesto with ramps but I would suggest stretching them with other greens like spinach, watercress, or parsley. They are also good simply grilled alongside asparagus with a little olive oil, salt, and pepper. Here is a recipe for chimichurri, try this on grilled meats or vegetables.

If you grill the ramps beforehand, this will give the butter a milder, smoky flavor. Makes 1 cup.

Cream butter in a mixer with paddle attachment. Add minced ramps and salt and pepper. Mix until well blended.

Transfer mixture to waxed paper, parchment paper, or plastic wrap, and roll into a cylinder, twisting ends to seal. Wrap this in foil and either refrigerate for a few weeks or freeze for up to six months.

Add stock and cook soup for about 10 minutes, or until potatoes are tender. Puree in blender, adding lime juice to taste.

Mashashimuet Park's History and Future
A Conference for Young People to Create Solutions
Get Outside, Get Moving
END_OF_DOCUMENT_TOKEN_TO_BE_REPLACED