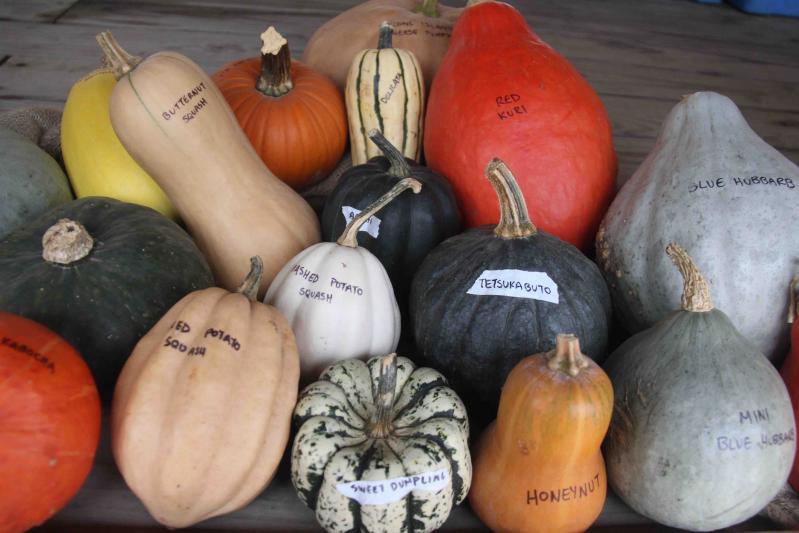 A myriad of squashes.
Durell Godfrey
By Florence Fabricant

Before the many farm stands were boarded up for the winter, they displayed a handsome crop of winter squashes. Some even found their way into the produce departments of the chains. The pumpkins to be sure, but also hubbards with warty shells in shades of red, some small, some immense.

The gray hubbards looked unfinished, like concrete awaiting a coat of enamel. Turban squash, an apt name for the prettily striped and puffed shape, was a centerpiece on many tables.

Where are they now? A winter squash purchased in November would keep many months in a cool place. (In the era before refrigeration and cross-country food shipment, the larder was the source of squashes throughout the winter.)

Until summer, the local markets will be receiving their produce from New York warehouses and markets. Butternut and acorn are the only winter squashes they carry. (Some botanical reason requires acorn to be classified as a summer squash, but this is a mere technicality. On the other hand, butternut, a true winter squash, has a much thinner skin than the other winter types.)

The nutritional advantage of winter squash over summer is tremendous. The long maturing of the winter varieties results in the vegetable accumulating Vitamin A (up to 10 times as much as summer squash — the entire daily adult requirement in a serving of butternut) as well as good concentrations of minerals and Vitamin C.

Prior to preparation, acorn and butternut squashes do not need refrigeration and I would suggest purchasing them early in the week, even for weekend use. By the end of the week they tend to become scarce around here. Prices are in the 20 to 30 cent per pound range. Lillian, the insider at the Amagansett IGA, thought that was "pretty expensive for winter squash; last year they were 15 to 19 cents per pound."

One can only share her philosophy "that's the way everything is." De Petris Market in Bridgehampton usually has butternuts for 19 cents per pound. One half to three-quarter pound is an average serving.

Winter squash can be sliced and boiled or steamed and then mashed. But unless you use the cooking water, some vitamin loss occurs. The alternative is baking. Since the vegetable is rather bland, you can enhance it with various seasonings or stuffings and thus glorified it can be the focus of a lunch or complement simply prepared meat or poultry.

Preheat oven to 400 degrees. Combine crumbs, raisins, nuts, three tablespoons of melted butter, and salt. Cut squash or squashes in half and remove seeds. Brush with some of the remaining butter.