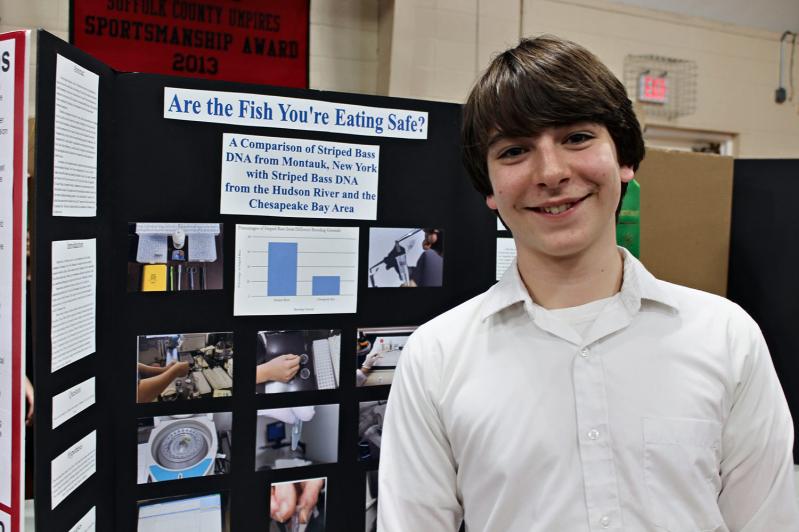 From curious third graders taking their first steps into science to seasoned seventh and eighth graders winning ribbons with sophisticated experiments, the Montauk School’s annual science fair on Friday was a journey into the minds of children.

About 150 students took part, producing what Kate Rossi-Snook described as an impressive array of projects that demonstrated children’s understanding of science and their surroundings.

“The really cool thing is that kids are aware of what’s happening out here, and the issues and their effects on the environment,” said Ms. Rossi-Snook, environmental advocate for the Concerned Citizens of Montauk, who was a judge and co-coordinator of the science fair.

Science fairs are often tedious and torturous for parents — as one particularly popular Facebook post “proved” by way of its own “research” — but the benefits for kids are many.

“Science projects are a great way to get students out of textbooks and into real life,” writes Kristin Moon, a biologist who is considered an expert on the teaching of science. “They learn how the knowledge they’ve acquired can be applied to real-world problems. . . . Science projects force students to rely on skills they’ve learned in many areas. These skills span many disciplines, including but not limited to reading, critical thinking, writing, math, and computer science. The student also learns how to budget and organize time and resources as he works to complete his project by a deadline. If the student is required to share their final project with others, they also get a chance to practice public speaking.”

In Montauk, Justin Prince emerged the winner of the seventh-grade competition with a project that asked the question “Are the fish you’re eating safe?” He compared the DNA and migration patterns of striped bass from Montauk, the Hudson River, and Chesapeake Bay, often traveling to a laboratory at New York University to conduct his research. “He did a lot of legwork,” said his dad, Burt Prince.

“I definitely learned from my sister,” Justin said. His older sister, Samantha, won Montauk’s science fair at almost every grade level when she was a student there. She’s in high school now, and was just accepted to Yale University.

Seamus O’Reilly placed second in the sixth-grade competition after asking the question, “What’s the effect of nicotine on plants?”

“So many people are smoking and vaping. I wanted to prove that this is the worst thing you can put into your body,” Seamus said. “The statistics wowed me — 13.7 percent of teens don’t know what’s in their e-cigarettes, and 66 percent just say ‘flavoring.’ ”

Many of the science projects addressed real-world problems on a kid-level scale.

“I played junior varsity golf at the high school. I wanted to know if the balls I used in practice were as good as the ones I play with,” said Carter Dickinson, a seventh grader whose project was titled “How to Improve Your Golf Game at Montauk Downs.” “I found that you can trust these balls.”

And Bea Flight and Amanda Arias, who are fifth graders, won their grade-level competition after testing doorknobs throughout the school to find out which one had the most bacteria. The answer? The boys’ locker room door. The second-floor girls’ bathroom had the fewest bacteria.

“We noticed people were getting sick a lot, and we knew that doorknobs spread sickness,” Bea said. “It really shocked us when we grew all this bacteria.”

Finn Mirando, also a fourth grader, shaved off patches of his own hair to find out whether it would grow back at different rates based on the part of his head where it was located. He won second place.

Pearse O’Rourke tested the quality of eggs laid by chickens who were fed different types of foods, such as vegetables or chicken feed, and won the third-grade competition.

To receive their scores, the kids were interviewed by multiple judges, who are professionals in the science, environmental, and education fields. “I think it’s important for the kids to see actual working scientists, to see how that can be defined, and in particular to see women in science,” Ms. Rossi-Snook said.

Cate Rogers of the Climate Reality Project was the keynote speaker and a judge. She asked the crowd of students whether they knew what climate change was, and there was a loud, collective “yeah” in response. There was applause when she showed a photo of Jerome Foster and Alexandria Villaseñor, two of the teens who organized the first Youth Climate Strike last year.

Yesterday, it was announced that Justin and his seventh-grade classmates Emily Bruno and Kaila Zeh would be representing Montauk at the Long Island Science Congress competition in April. Amina and Katherine, along with Gabriella Payne, Sarah Stuckart, Cashus Muse, Vincent Franzone, and Kailani Lee Balducci, who are all eighth graders, will also compete in the Long Island Science Congress. For Brookhaven National Laboratory’s elementary school science fair in May, Seamus, Finn, Elle, and Pearse will represent the Montauk School.