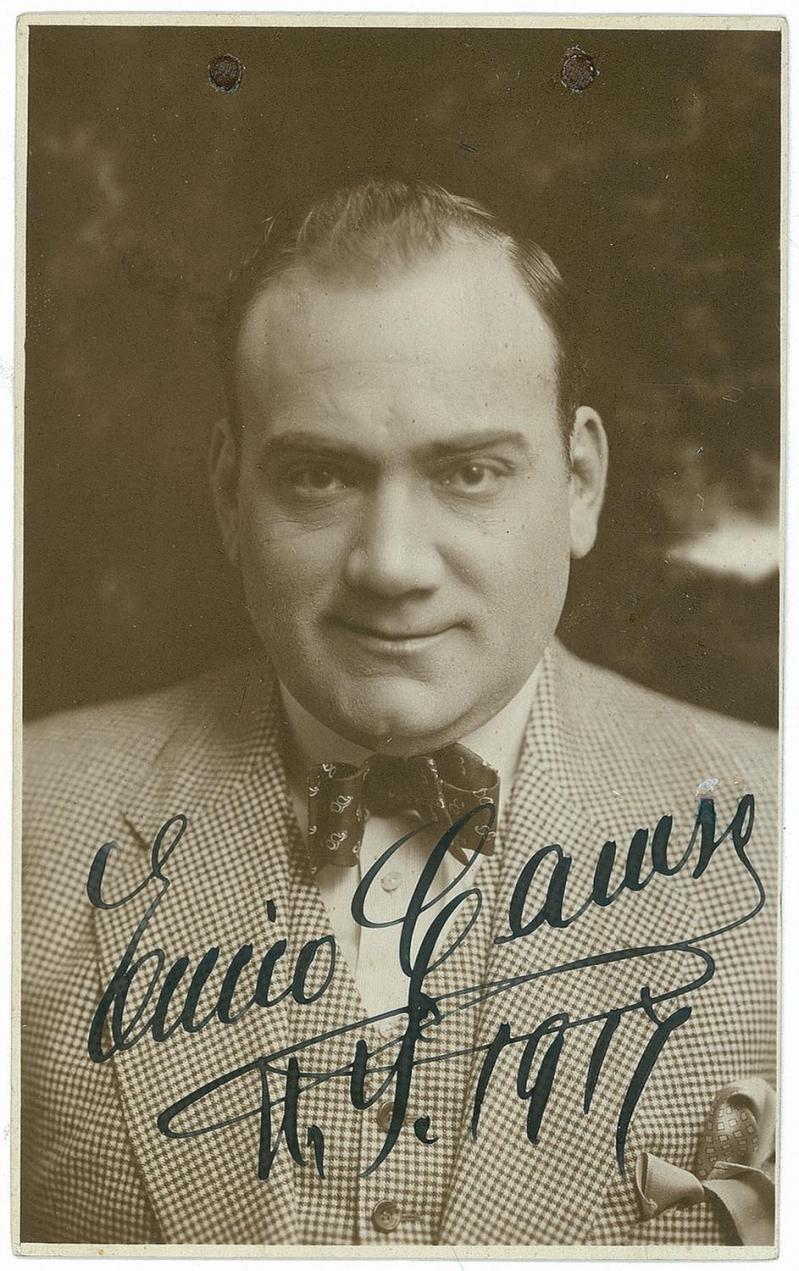 Enrico Caruso was in Havana on the night that a strongbox, its alarm bell still ringing, was spirited off into the surrounding darkness.
Wikicommons
By Irene Silverman

There were 10 servants in Enrico Caruso’s East Hampton summer house on the night of June 8, 1920, when a burglar alarm attached to the family strongbox rang off, bringing the wife of the world-famous opera star running.

“I was sitting in my parlor, sewing, at about 10:30 this evening when I heard the automatic bell of my safe ringing,” she told The New York Times in the morning. “I rushed upstairs to my bedroom, where the safe is kept.”

The steel safe, with her jewel box inside, stood open. The box, a small one and not very heavy, was gone.
She found a window in the bedroom smashed, and saw someone running down an outside stairway on the left wing of the house.

The stolen strongbox contained “practically all of the jewelry I have,” she told police -- $400,000 worth in all, about $5.4 million in today’s dollars -- including a $75,000 diamond necklace with one large stone and 200 smaller ones, a wedding gift from the tenor, who was away in Havana performing. She cabled him the news, though his secretary withheld it from him until the next day, fearing Caruso would be too upset to perform his role in “Aida” that night. He cabled back: “Please don’t worry, I will replace all the stolen jewels.”

Private detectives and insurance investigators descended on the town that very night. The next day, reporters from the New York papers flooded in on every train, “some even making the entire trip by automobile,” marveled The East Hampton Star.

“A never-ending stream of detectives roamed the house and grounds for weeks, looking for clues and cross-examining everyone,” recalled Caruso’s eldest son by his first marriage, Enrico Caruso Jr., in a biography of his father published 50 years later.

That summer, the Carusos were renting the 60-acre estate on Georgica Pond now owned by Ronald Perelman and called the Creeks, and one theory was that the thief or thieves had escaped across the pond by boat, or perhaps first by car and then boat, crossing Gardiner’s Bay to Connecticut. Police searched the woods on the Wainscott side of the pond, but found nothing.

All the servants were Italian, The Star reported, except for the Irish chauffeur, George Fitzgerald, who happened to be the only one not in the house at the time. Hearing the alarm bell ringing, he ran inside, heard what had happened, and raced back out. The bell was still going off, he told police (it would have gone on ringing for 48 hours unless stopped). He pulled out a pistol, a .32-caliber revolver, fired two shots into the dark, striking nothing, and followed the sound for about 100 feet, where he found the jewel case on the ground and shut off the alarm. The case was empty but for two diamond-and-pearl drop earrings and a diamond-studded hairpin.

Several servants reported seeing a light, possibly an automobile headlight, out toward the highway. Sheriffs’ deputies and all the police within 25 miles of East Hampton were sent to keep watch on cars, trains, and ferries, to no avail. Bloodhounds were dispatched the next morning, noses to the ground; they found nothing.

Detectives agreed that the evidence pointed to an inside job, and questioned the servants closely all the next day and into the night. Dorothy Caruso said at first that she could not believe any of them was involved.

Over the next week, however, she became convinced that the thief was indeed of the household, and, worse, still in the house. Her brother, Park Benjamin, arrived from the city to take charge while Caruso was in Cuba; he went about with a revolver on his hip, as did his wife, Dorothy’s sister-in-law, and all the detectives, at least 10 of whom were staying with the family. “Caruso Villa Like an Armed Camp,” said The Times.

An arrest was predicted to happen any moment: “Detectives Suspect Three Persons and Have One Under Surveillance.” This was the last known mention of any “three persons,” but the “one” -- the chauffeur Fitzgerald, who had been in the family’s employ for seven years -- was arrested about 10 days after the burglary, charged with possessing a gun without a permit, a violation of the Sullivan Law.

The Times described Fitzgerald as a “direct, square-looking chap.” He told reporters his conscience was clear, and that Mr. Caruso had been “wonderfully kind” to him, paying rent to board his family in East Hampton in addition to his salary. When he’d last driven the tenor to the train station, he recalled, Caruso had handed him $50, saying, “Here, Fitz, play poker with this while I’m gone.”

In hindsight, Mr. Fitzgerald was the victim of police frustration at their inability to make progress in the case. His arrest “brought forth a tirade from the townsmen,” The Star reported. It was common knowledge in East Hampton that there had been other guns in the Caruso house, kept there for the protection of the tenor’s young second wife and their 6-month-old daughter, Gloria. The chauffeur told the court that he only carried the pistol at the family’s direction, and only at night.

The charge was dismissed a few days later. Within a month, however, so was the unfortunate Fitz. Mrs. Caruso, who had declined to put up his bail of $1,000 (John Easer, the estate’s caretaker and his poker buddy, posted it instead), told reporters she had never liked the man, and that his discharge had been “a subject of conversation between herself and Caruso for some time.” She insisted that there was no connection between the robbery and the chauffeur’s dismissal.

Carlo Ragozzino, the family chef, was fired at about the same time, again upon the insistence of Dorothy Caruso. Whether she somehow suspected both chef and chauffeur of complicity in the theft we cannot know, but Ragozzino later sued the family for back pay. (The judge found no evidence to show that his cooking was “as bad as the defendants claimed,” and awarded him $700.)

The burglary and its aftermath “ended our peaceful existence for the rest of the summer,” the younger Mr. Caruso remembered. Lawmen went on poking about the house and its 60-acre grounds until they tired of it, and the family of them. The insurance underwriters, meanwhile, offered a $10,000 reward for information leading to an arrest, which produced a scrum of scam artists claiming inside knowledge of the theft.

All of it kept the “jazz journalists” of the era’s gossipy new tabloids very happy. Even The Times devoted reams of breathless newsprint to a fantastical story dreamed up by a pair of notorious sisters who made their living suing millionaires for breach of promise. Despite the pair’s history, police bought their account of a mysterious middleman who’d offered to sell them at least some of the stolen jewels. Detectives set up two “dictographs” in their apartment, attached to wires on the roof of the building, hoping to record him in the act. In a slapstick denouement, a hapless fur salesman wound up under arrest. The sisters had no money and he had no diamonds, but it all made for great copy -- at least until Mrs. Caruso, appearing in court, said she could not identify the salesman as the man she’d seen running down the stairs with her jewel box, and the charge was summarily dismissed.

Later that summer, an attorney for the insurance companies opened Caruso’s safety deposit box at the Hudson Trust Company, Broadway and 41st Street, and found, along with all of the tenor’s personal jewelry, a diamond and pearl headband that had been thought part of the stolen trove. Its discovery reduced the value of the jewels still missing to $375,000.

The Caruso robbery was just one of several major jewel thefts that happened in New York and environs in the year 1920. None of the stolen valuables were ever recovered — not in this country, anyway. By the time police in America learned of its M.O., a well-organized smuggling ring had disposed of everything in Germany, mostly in Hamburg but also in Berlin.

It turned out that the thieves and their pawnbrokers, operating in large part from the Port of Baltimore, were conspiring with sailors aboard a steamship, the S.S. Mongolia, to ferry the loot across the Atlantic. An officer on a sister ship, the Manchuria, explained to reporters how easy it would be to carry over “any sort of non-bulky stolen goods.” There were no customs officials or other bean counters back then, snooping through the crew’s belongings.

“These are low-class men,” the officer added dismissively. “Only the quartermaster and a few others are American. We know nothing about them beyond their certificates.”

So there, in November 1920, matters stood. For the great Caruso, the robbery and all that followed, including a lengthy North American concert tour, marked the start of a rapid physical decline. In December, a few days before a performance of “Pagliacci” at the Metropolitan Opera, the tenor felt a chill and experienced a “dull pain in his side.” He was treated for bronchitis, but a week later suffered a throat hemorrhage. In the new year, he had a series of operations and went home to Italy to recuperate.

Hoedown on the Farm, Cocktails in the Garden
Main Beach Free Concerts in Final Weeks
Services and Counseling After Death of Popular Teacher Assistant
END_OF_DOCUMENT_TOKEN_TO_BE_REPLACED