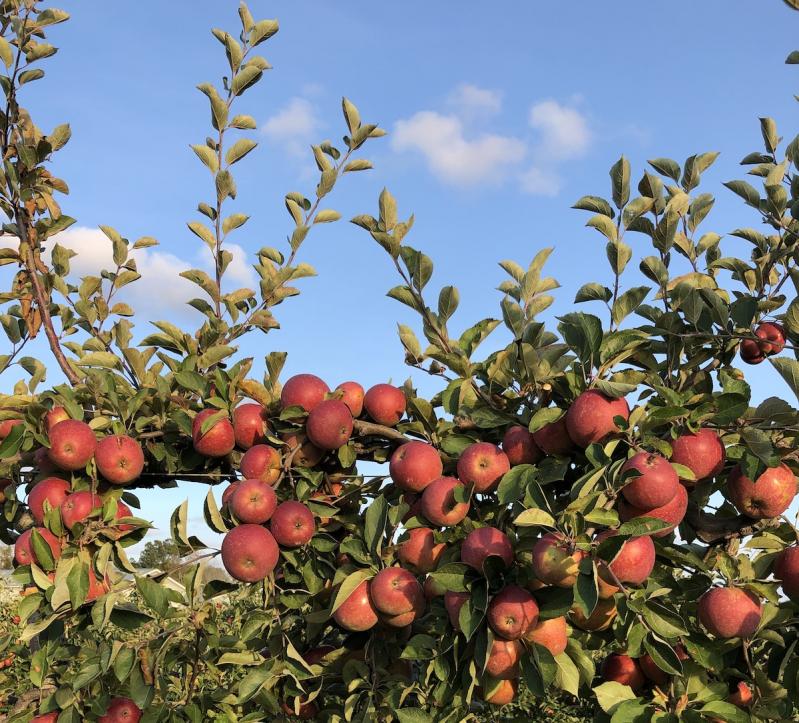 I’ve always been fascinated with the math and symmetry associated with apples: Each apple usually contains five seeds, and when cut horizontally, you can see them in a star shape, deep within the core. Each tree is capable of growing up to 150 pieces of fruit a year, and standard apple trees can live for 50 years. How can one seed — so mysterious in its form of a hidden star — create so much goodness and nourishment in this world?

It’s hard not to sound like you work for the National Apple Board when writing about apples; they are truly a form of perfection. A healthy and portable fruit, containing everything needed from which new apple trees can grow — it sounds like a miracle, doesn’t it? Apples, for most of us, are one of the first foods we consume as babies. Apples have been around for thousands of years, and can also be viewed through religious contexts as well, providing potent visual symbols across  cultures, standing in for prosperity, redemption, temptation, and fertility. Apples are kind of constantly mentioned in legends, and turn up frequently in popular song (Apple Blossom Time by the Andrews Sisters, Applejackby Dolly Parton, and who can forget the 1960s A.M. radio hit Little Green Apples?).

There is certainly good reason why apples are at the core of our American identity. Easily stored for the winter, apples were a staple for colonists here in the New World. Some historians believe that apples saved the early settlers during their first winter, providing both food and drink as nourishment.

Apples are a nutritional powerhouse. They are  low in calories, and a great source of vitamin C and fiber. They also contain antioxidants, and promote heart health and lower your risk for type-two diabetes. Eating apples promotes gut health, and may improve brain health. Clearly, we should all be eating more apples.

Well, aren’t we fortunate, then, that some of the best apples in the world grow right here on the South Fork?

New York State is one of the top apple-producing states in the country, number one east of the Mississippi and second only to Washington State. We are home to well over 600 commercial growers and many more small-time orchards, so you never have to travel far to find a U-pick or fresh peck of apples at a farm stand. Around here, our small, family-owned orchards have become a tourist attraction in their own right each autumn, echoing the success of the vineyards of Long Island.

Along Mecox Road, down near the ocean in Bridgehampton, my favorite apple orchard sits on 60 acres of land that has been in the Halsey family for generations. More than 350 years ago, the Halseys settled in Mecox and began farming. John Halsey and his wife, Evelyn, began growing apples on the family property in the 1970, and the family now produces more than 30 varieties, selling them at their stand, the Milk Pail, on the highway in Water Mill and at a smaller stand beside the orchard, where they raise more than 12,000 trees.

John and Evelyn’s daughters, Jennifer and Amy, have taken over the business, which includes running the Milk Pail Store on Montauk Highway. Both young women are accomplished farmers who hold agricultural degrees and are intent on passing on to the next generation their love of farming and their love for land they grew up on. They host multiple school groups each fall, sharing knowledge of how we can please the bees and promote healthier ways of raising food. Visiting the Milk Pail orchard each year has become a tradition for so many East Enders, and spending time walking through the rows of trees feeds the body and soul. Memories are made on those apple picking excursions. (In fact, my son, Peter, said his first word as a baby, holding an apple under a Halsey tree 29 years ago. He said “apple!”)

Jenn and Amy work closely with the Cornell University breeding program, growing new varieties that haven’t been named yet. “We are fond of the unnamed varieties, because their flavor is amazing and you can’t find them anywhere else,” says Jenn. “I tell people to try the unnamed ones, and the ones they haven’t heard of.” When you wander the Milk Pail U-pick operation — basking in the October sunshine and breathing in the delicious, cider-y smell of the fallen fruit — you will notice trees marked with numbers, preceded by M.P. for Milk Pail: Those are the unnamed ones.

Families make annual pilgrimages — many coming straight out from Queens, Manhattan, or New Jersey — not just to pick their own apples, but also to buy homemade apple cider and doughnuts. “It’s fun to meet new people and introduce them to the way we farm,” says Jenn. “I like to show that we not only care about growing a crop to provide a living for ourselves, but we also care very deeply about the environment and how we are affecting it.”

Everyone deserves to experience eating an apple directly from the tree. There is nothing better than carefully twisting that one, special apple that you spied and chose as your own, then shining it up on your jacket, taking a first crunchy bite, and carefully waving away the bees as they buzz around. (After all, if it wasn’t for those bees, we wouldn’t have the apples.) You must take a moment to experience the moment as it deserves to be experienced: Notice the light in the sky, and the breeze from Mecox Bay. . . . It is pure pleasure.

Seven Ponds Orchard in Water Mill is another South Fork orchard that also allows you to have the pleasure of picking your own. They have a fun family atmosphere, with activities for the kids and fresh-baked goods for sale. On the North Fork, Harbes Family Farm in Riverhead is a great family destination for apple and pumpkin-picking, too. Wickham’s Fruit Farm in Cutchogue is another beautiful  place to visit, and certainly worth the ferry rides on a weekend fall day. As agritourism grows on both the North and the South Fork, the opportunity to support farmers and buy fresh and healthy foods is a win-win for all.

Once you have filled your paper bag or bushel and carried your bounty home, you must make decisions on how to eat and use your apples. Most people go for apple pie or apple crisp, or perhaps applesauce. But you must remember that apples are wonderful in savory recipes, as well. I love to bake apples alongside a pork loin, or make apples and browned breakfast sausage on Sunday mornings. Fresh apple slices in salads and on sandwiches add snap and that sweet-and-tart taste. Alongside cheese and fresh bread, apples and a crisp glass of wine make for a beautiful lunch.

Jenn Halsey suggests that apples are best stored in the refrigerator, unwashed. “Refrigeration slows down the aging process,” she says, “and keeps the apples crisp and juicy.” They will last six to eight weeks that way; if stored at room temperature, they will last on the counter for about a week.

I would not at all recommend freezing your beautiful Long Island apple — they are far too precious for that. These are not the apples you find in a supermarket that were picked months ago on the other side of the world. These are beauties that called your name from the tree!

Pretty much all apples are great for snacking, but not all are great for cooking. Pay attention to the notes in the sidebar for the best use of some common types of apples. Think outside the box, and research some new ideas. Try the recipe we have included, as it is an example of apple excellence, and a family favorite. Jenn is partial to sweet-tart apples, and chooses to bake with Jonagold apples, although she also loves Pink Luster, Gold Rush, and Pink Lady apples. “My parents eat pretty much any kind, but they like Fuji, which is a touch sweeter.”

Jenn, by the way, actually does eat an apple a day. “Sometimes more!”

There are more than 100 varieties to choose from, but these are some favorites — all easily found out here. Rule of thumb: Tart, firm apples will maintain flavor when cooked and hold shape, too. Softer apples become more of a mash and lose some flavor when cooked.

Sweet-tart, very crisp and juicy. Flesh has a fizzy quality, and is sharp. Great fresh as well as cooked. Developed in Australia in the 1970s.

The sweetest apple, and very low in acidity. Best eaten fresh. Amazing in salads. Developed in Japan in the 1930s.

One of the most dependable and tasty. Notes of citrus and floral sweetness. Terrific fresh or cooked. Developed in New Zealand in the 1930s, and now one of the most popular in the U.S.

Firm and quite tart, a bit sour. Notes of lemon, incredible crunch. Excellent fresh and cooked. A pie-making apple. Developed in Australia in the 1860s.

Large and sweet-tart, perfect for pies and other baking — a Halsey farmer favorite! A cross between a Golden Delicious and a Jonathan apple, developed by Cornell in the 1950s.

An heirloom. Best to eat fresh or when cooking something soft, like applesauce or a baked apple that turns to pudding. If you want your pie or pork roast to show distinct slices, don’t choose this. Developed in Canada in the early 19th century, the McIntosh is incredibly common and is the national apple of Canada.

Great to eat straight off the tree, if you are doing U-pick. The peel is dark red, the flesh tart and crunchy. Fans will fight you if you try to tell them it’s not the best “eating apple.” Developed in the Empire State by Cornell University in the 1940s.

Another New Yorker. Juicy and simple, with a nice balance between tartness and sweetness. Good in pies. Developed in the early 1920s.