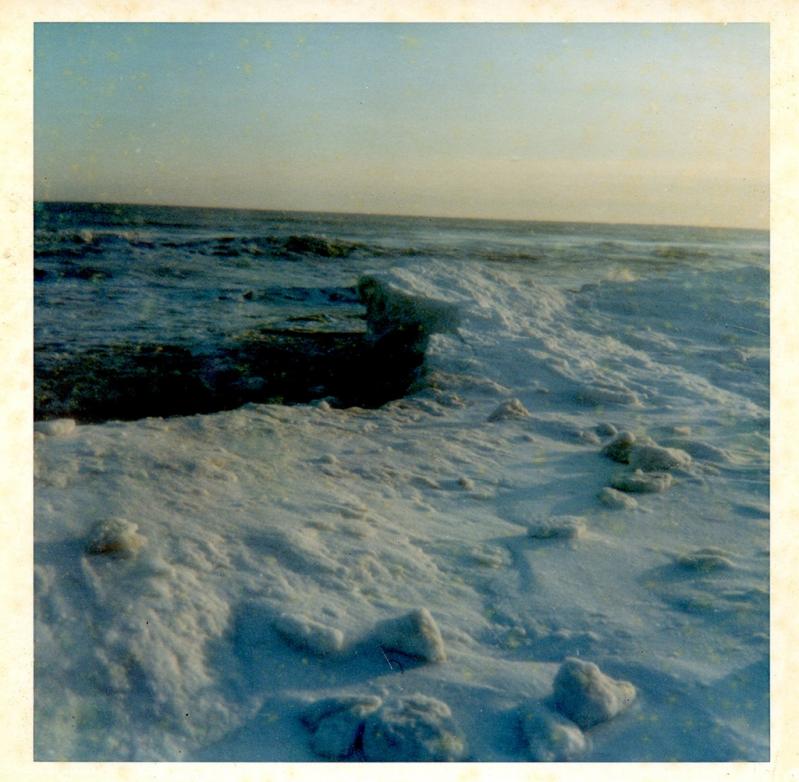 Ken Brown stopped by the office on Monday with an old snapshot that he thought we would like a look at. During the winter of 1966 it was so cold that the edge of the ocean froze. Ken had been going through some old things and found the photograph, taken at East Hampton Main Beach toward low tide late in the day.

In it, salt ice rims the shore. There is a bit of moving surf in the background under sky that is clear except for the far western horizon, where a white haze might be a hint of snow to come. The ice is as high as a man’s hip, and it falls off sharply onto a hard foreshore.

Standing by the front door looking out onto Main Street, we agreed that it does not get that cold around here now. Ken said he used to go out on the frozen harbors to spear eels from holes cut in the ice. “You can’t do that anymore.”

There is a lot about the winters of decades ago that would be impossible in the present. Icehouses, like Tuthill’s on Fort Pond Bay or on the old Bell Estate in Amagansett, depended on hard freezes to get the tops of the ponds thick enough to be worth cutting.

Stocking the icehouses took a lot of effort. Men went onto the ponds with long, gap-toothed saws, cutting blocks loose in what would quickly become a channel about five or six feet wide, along which the ice, about eight inches thick at least, would be floated to shore. In the bigger operations, a conveyor of sorts would be rigged, and the blocks dragged by block and tackle or, later, a donkey engine with a winch.

From the sides of the lengthening channel men stood with long, L-tipped iron plugs to push the ice blocks along. Sometimes they put planks across the channel so that pieces too large to get up the ramp onto the conveyor could be made shorter, struck from above with heavy, sharpened iron bars.

There are stories, too, about being able to drive a car on Gardiner’s Bay. Some winters, well within my memory, Three Mile Harbor and Georgica Pond would freeze up, and my father and siblings and I would join the Halseys and Bud Topping and other ice boaters to spend what seemed to be glorious weeks, sailing back and forth. It’s hard to know if that condition will ever come back, but from what I see, winters are not at all what they used to be.

The last time I remember getting on the ice was a couple years ago, and that was just for a few days at the end of February, maybe not more than a weekend. My two iceboats wait in parts in the rafters of the barn. I see no reason to rush to take them down, sharpen the runners, and get ready. Instead, I am already thinking about spring, whether it is too late to plant the last of the garlic, and if I should start pruning the apple trees.