As the Black Lives Matter movement focuses attention on the legacy of slavery and racism in the United States, there is a sense that the assessment is incomplete. Yes, George Washington and Thomas Jefferson were enslavers, as “slave owners” have come to be called, but so was nearly everyone else who could afford to in colonial and early republic America. East Hampton was no different. My own family on my father’s side were enslavers, too.

For a change of scenery this week, I spent a good part of Tuesday working outside on the East Hampton Library’s back lawn. From a shaded spot near the west property line, the grass slopes downward over a short distance, then more or less levels off toward Main Street. The Rev. Samuel Buell lived here in the 18th century. He was the town’s third minister and himself had enslaved people in his house or living on his land. Across the street, the Mulford Farmhouse is visible, where people were enslaved for more than a century. In 1798, Buell paid the Mulfords “fifty pounds of lawful money of New-York currency” for a “negro servant man called Gree.”

East Hampton was part of an extended economic network driven by the sugar wealth created in the West Indies, and along with the rum and molasses that came north on traders’ vessels were people of African heritage to be put to work on farms, in trades, and in households.

Dinah Buell Jack was one of these, I suspect, though how she came to be in East Hampton is unknown. She died in 1855 of consumption. If she carried Mr Buell’s last name, I have often thought that the lane named after him that edges the library lawn should be renamed. It would be difficult, it seems to me, for anyone to have any meaningful objection to chang-ing Buell Lane to Dinah Buell Lane. But then, as I said, nearly every household of means had enslaved people during the first 150-plus years of East Hampton’s colonial era, and anyone who had one of the old streets named after him was an enslaver. This includes the locally celebrated old names Edwards, Barnes, Baker, Parsons, Miller, Mulford, Gardiner, Osborn, Huntting, Dayton, Fithian, Dominy, and Hedges, which raises the question, why not rename them all?

Pulling back from that unanswered, the underlying reasons for slavery in the North and, specifically on Long Island, need deep examination. So, too, is a sense that while the South had its plantation economy blown up by the Civil War, the North never really had a day of reckoning for its own involvement in slavery. As the descendant of enslavers many times over, I firmly believe that some tiny sliver of the loose change in my pants pocket is the result of enslaved labor.

On colonial Long Island, one did not have to actually own other human beings to be part of the slavery economy. Even the most humble tenant farmer with a few pounds of wool or a bushel of flax seed who was able to get the goods to port and aboard a southbound trader had a part in it. One celebrated Sag Harbor historical figure sailed several times to the Caribbean as a factor to sell salted herring and horses to plantation owners. Money from slavery traveled all the way back up the chain to the men who caught the fish or tended the horses.

Reckoning with slavery in the North is necessary and happening. The obvious place to start is acknowledging it existed right here at home, “up and down Main Street,” as my grandmother used to say. 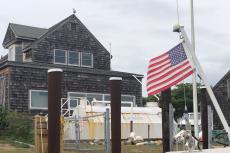