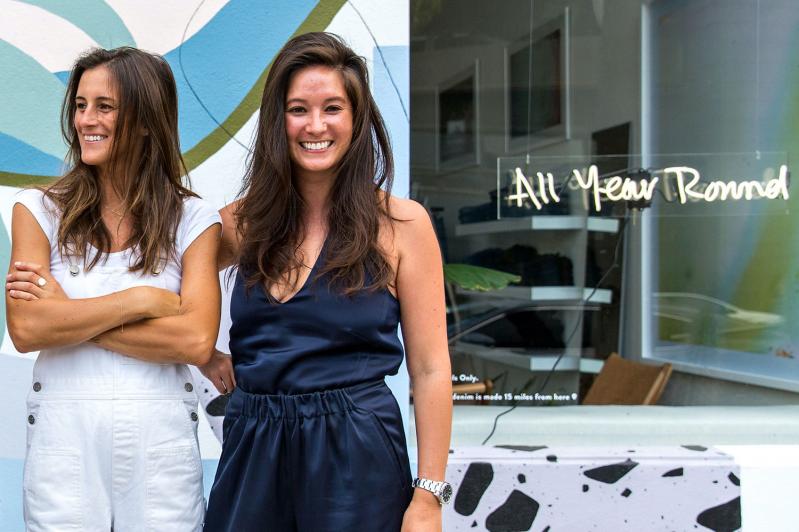 With the pandemic-related increase in East Hampton’s population, some new business owners like Ms. Bonbrest are looking to serve customers beyond just the summer season.

A self-described collector — ceramics, books, clothes — and a beach lover, Ms. Bonbrest was brought up in the village and graduated from East Hampton High School in 2000. She left her hometown to pursue a career in the fashion industry but returned this year to make East Hampton her permanent residence.

In May, AYR opened at 32 Park Place, fulfilling Ms. Bonbrest’s dream of almost two decades to open a store in her hometown. Having previously operated a location in Sag Harbor, she said East Hampton feels like a better fit. She’s excited to be a local shop on the block and hopes more local and small businesses can also open in East Hampton to recreate the sense of village living that seems to have dissipated over the past decade.

“So many businesses in East Hampton close down in the ‘off-season,’ and we wanted to be an alternative to that structure,” Ms. Bonbrest said. “A light on in the street during seasons that are less frequented.”

While in New York City, she and Maggie Winter, her best friend from their time at the University of Michigan, co-founded and independently launched AYR in 2016. From design to manufacturing, AYR’s team of fewer than 10 people works to fill an alternative role in the fast-fashion market, in contrast to the trendy and expensive brands that she said she grew up with but that failed to represent her.

“In creating AYR, we were able to fill what we saw as a void in the marketplace, delivering seasonless, premium essentials for everyday life,” Ms. Bonbrest said. “Our idea was to deliver slow fashion, fast and direct to consumers, and our mission has always been to create confidence through clothing.”

Today, the AYR women’s clothing line has stores in SoHo and Venice, Calif., and pop-up shops in places like Denver, San Francisco, and New York’s Upper East Side. Featured in Oprah’s O magazine, Vogue, and Vanity Fair, AYR has seen its fair share of success since its launch. Celebrities such as Gwyneth Paltrow, Jessica Alba, and Chrissy Tiegen have been spotted sporting AYR apparel, but Ms. Bonbrest says she feels most successful when she sees her clothes out in the “wild.”

Another year-round East Hampton Village shop owner, Khanh Ngo, owner of Khanh Sports and EH Eyewear, agreed that it is difficult to support a business outside the typical boom of the summer months. It’s easier to support a store if you have constant foot traffic, and despite the changing demographics, relying on a small pool of customers to support a business is obviously difficult, he said, adding that it’s important to plan how you will retain employees so as to reduce turnover.

“Usually in the village of East Hampton, business takes place in about a 100-day window,” Mr. Ngo said.

Ms. Bonbrest said she thinks the customer base in East Hampton can now support more year-round businesses. She’s seen the majority of her peers move back to East Hampton on a year-round basis and she believes businesses are adapting to this demographic shift. Plus, she said, since the start of the pandemic, more of the community seems to be coming out to support local shops.

Besides operating and maintaining AYR’s current stores, Ms. Bonbrest said her company is also trying to meet all its customers where they are at. For example, during the colder months of 2020, when people were stuck indoors, AYR launched a successful printed catalog to appeal to shoppers at home. And she has plans to continue expanding the brand and her customer base in the future.

Celebrate Hanukkah All Across Town and at Home
Stuffed With Turkey? Walk It Off
Blood Drive Tuesday in Bridgehampton
END_OF_DOCUMENT_TOKEN_TO_BE_REPLACED