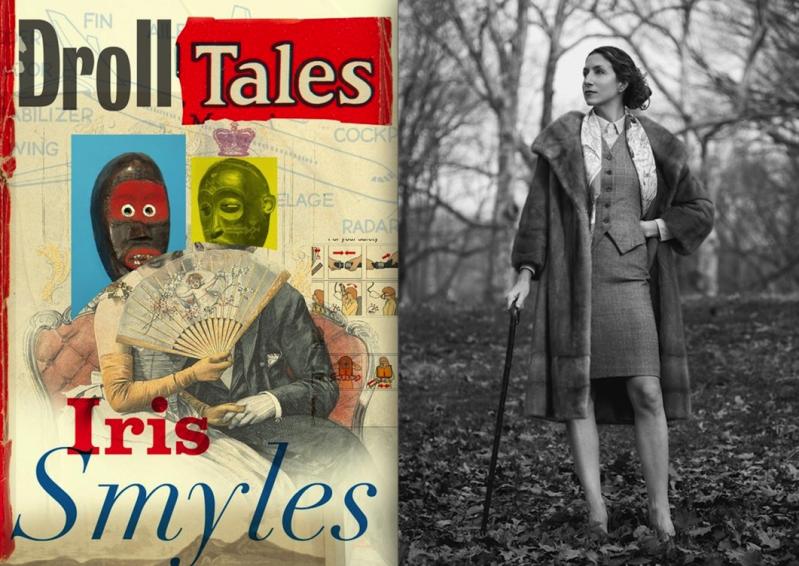 The jacket copy for Iris Smyles's "Droll Tales" advertises a reality that is "a mutually agreed upon illusion." Actually "allusion" is a better word. The title of the collection cites Balzac's "Droll Stories." The "glossary of terms not found in this book" recalls the Bureau of Surrealist Research presided over by Antonin Artaud, who's cited later in the book and famed for his Theater of Cruelty. The author's note is a restatement of Zeno's paradox, the "Tractatus" of Stoic philosophy in which a turtle beats Achilles and ultimately no one gets anywhere.

Here is the entry under "Meaning" in Ms. Smyles's glossary of unused terms: "(derivation of mean): the unpleasant sentiment behind what is actually stated. See: The meaning of life. Life has no meaning. You mean everything to me. Why are you being so mean, I thought you loved me." Remember Monty Python's "The Meaning of Life"?

You only have to open the first tale, "Medusa's Garden," the vade mecum for this surrealist project, to be introduced to a suburban form of Diaghilev's Ballets Russes. Here the narrator unstintingly takes us down another rabbit hole to the Salon des Refuses of 1863 as the instructor urges his students to "Refuse fate, my cursed little ones." But the ballerina likes "flying" more than she likes "leaping," and so becomes a flight attendant. "Walking down the Ramblas on a layover in Barcelona," she joins "the Guild of Living Statues, descendants of the tableaux vivant," eventually performing in Raphael's fresco "The School of Athens" and John William Waterhouse's "Echo and Narcissus" in Nice.

The language soars in a free-associative style in which everything makes sense while eluding any conventional narrative arc. Her "yard" is filled with men who have become frozen, "like the way Dante froze when, overcome with nerves, he saw Beatrice in the street."

"If I were a sculptor, I'd make a fountain of Ophelia bleeding from the wrists. . . . But I am not a sculptor, I am a sculpture."

Surrealism is also characterized by humor, which the author employs. Albert, the director of the performances, who has an aversion to McDonald's Happy Meals and a love of Tolstoy, says "All Happy Meals resemble one another, each unhappy meal is unhappy in its own way." Red Lobster, Burger King, and "a four-star restaurant with good Yelp reviews" all have cameos, along with Raphael's model La fornarina.

It's Robert Hughes on speed. "Stone nudes litter the parks, and their vaginas and penises do not shock because they were sculpted long ago, and their subjects are long dead, and through their deaths their vulgarity has been transmuted into beauty." Says Albert: "We are memories before they are remembered."

The pithy brilliance pours out like water from one of the sculptural fountains that are described. "What do people look for in art, after all, but an echo of themselves, some feeling of recognition and with that consolation?"

"We process empathy through the mirroring of facial expressions."

"People who've had Botox show a diminished capacity for empathy."

"An object unobserved is like an event that hasn't happened. . . . Like Schrodinger's Cat, alive and dead at the same time. . . ."

"Medusa's Garden," this first piece in the collection, is a seamless masterpiece. Ms. Smyles is an "associationist," a Dr. Johnson of artistic conception. "Melancholy is the happiness of being sad," she says, quoting Victor Hugo, in her "Dear Reader."

"Contemporary Grammar" employs a child's scrawl of diagrammed sentences in which "the silence of heartbreak is deafening."

"Adults forget that novelty is not actually novel for kids, since everything to them is already relentlessly new" is the premise on which "The Two Jacobs, With an Introduction by a Third" begins. Along the way, one of the Jacobs who likes to be called Jake meets Iris (the author's alter ego), who informs him she has read Chekhov's "The Lady With the Dog" as part of a literature-in-translation project in which she plans to translate "all of the French Symbolists into Pig Latin."

In "Exquisite Bachelor," the narrator dreams she is "an aspiring dental hygienist from North Dakota on a TV show featuring twenty-five surrealists. . . ." In "Veterans of Future Wars," the zany locution "So your fallback plan is to be a celebrity. Makes sense" and "Amateur actors are like volunteer firemen, except instead of saving your life, for a few hours they ruin it" become premises.

Is it automatic writing or autofiction? In "My Ex-Boyfriend," Peter Feinstein, who "five years ago . . . had not written a poem in over ninety days," has conversations with his unconscious when he comes home from work while conjuring an image of Freud looking down on him from a "spot on the ceiling."

"A Fortune of Cookies" contains this adage: "One day you will contact your favorite Chinese restaurant and ask them what they want." Another story, "The Autobiography of Gertrude Stein," has little to with either Alice B. Toklas or Gertrude Stein. The citation is just there as the starting point for a riff that includes a dog named after Stein's brother Leo.

Ms. Smyles is promiscuous and protean and her personalities proliferate cellularly. The labile nature of identity is itself the lingua franca of her style. The prose reels on like a car out of control. Pronouns are a source of controversy.

In "Philip and Penelope in a Variety of Tenses," Penelope is quoted by her lover as saying: "[You] [are] having trouble inhabiting a sense of I with regard to [me] right now."

In "Aboard the Shehrazad," Ms. Smyles anticipates the reception to her own book when one of her characters, Jacob Blau, who has just eaten the final chapter of "The Magic Mountain" at an elegant ship's dinner, produces a neologism. "I'm afraid I blurbed. Sometimes when I have gas, my body involuntarily expels it in short bursts of favorable book-jacket copy."

Elsewhere, "Alex shrugged and began explaining his pre-Copernican attitude toward weather, how he believed it revolved around him." "Our secrets and rites are so well concealed that even our own members do not know that they are members, though some suspect." "The book opens with the discovery that God is dead, and the plot follows Man as he searches for the killer. . . ."

A translation of Mallarme's "The Azure" into Pig Latin, "Ethay everlastingway Azureway'say anquiltray ironyway" ("The everlasting Azure's tranquil irony"), epitomizes Ms. Smyles's delightful silliness. She is alternately brilliant and maddening. She basks in originality until it manages to become predictable. Remember Billie Whitelaw's mouth in Beckett's "Not I"?

Francis Levy's "The Wormhole Society" will soon be released as both a book and a graphic novel. A trailer for the animated version of his novel "Erotomania: A Romance" can be found on YouTube by searching for "Francis Levy Erotomania." He lives part time in Wainscott.

Iris Smyles is the author of "Iris Has Free Time" and "Dating Tips for the Unemployed." She lives in East Hampton. "Droll Tales" will be out on July 5.