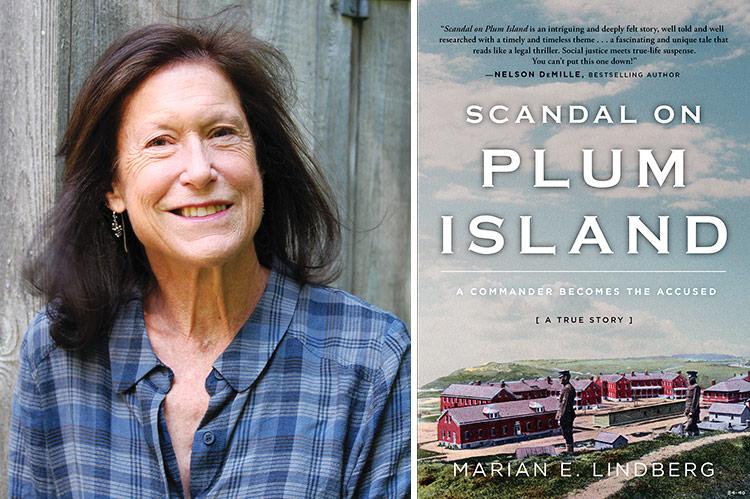 “Fascination with a place led to this book,” writes Marian E. Lindberg of her new history, “Scandal on Plum Island,” due for release by East End Press on Tuesday. But in truth, place has little to do with her story — excepting that an island, as Ms. Lindberg notes, gives rise to “a special feeling” among its inhabitants, “a freedom from rules and convention, even from time itself.”

Such was the state of affairs when Maj. Benjamin M. Koehler arrived to take command of 700 soldiers stationed at Fort Terry on Plum Island in 1911. A distinguished veteran of the Spanish-American War and a West Point graduate, Koehler was charged by the Army with restoring discipline to the base. Three years later, the 42-year old major would be tried in a military tribunal for homoerotic acts. Was it a “frameup,” as Ms. Lindberg supposes? If so, what drove Koehler’s accusers to bring him down?

The idea for the book began a decade ago when Ms. Lindberg, a practicing lawyer, was appointed by the Nature Conservancy’s Long Island Chapter to act as an advocate for the protection of Plum Island in Gardiner’s Bay, due east of Orient Point. She happened on “A World Unto Itself: The Remarkable History of Plum Island, New York,” which has a chapter on Koehler by Amy Kasuga Folk. “I was astonished that such a significant, virtually unknown trial had taken place in eastern Long Island,” Ms. Lindberg writes. She was seized with a desire “to get beyond the facts and inhabit the inner world” of the accused — and perhaps in doing so vindicate Koehler for posterity.

Given that Koehler “left scant record of his emotions,” the author has set herself a formidable task. What we know of Koehler is that he was a mere 5 feet 3 inches tall, pudgy, unmarried, and seemingly uninterested in romancing women — all of which would figure beneath the surface prejudicially. Martialing support, his advocates focused on his consummate “manliness,” a general preoccupation of American men at the time.

“The Captain wore a see-through dress,” opens Ms. Lindberg, in a tantalizing first sentence, “. . . in a certain light, guests at the party would see the outline of his body.” That this describes the Halloween costume of Capt. Philip Worcester, Koehler’s chief accuser, is one of the great ironies here. A drunken Worcester “sort of wiggled” as he danced, to the disgust of many, feigning a shy country girl in mock flirtation. “You have not enough clothes,” Koehler recalled saying, and “struck him in the stomach to make his point.”

Within weeks, however, Worcester was traveling to New York to the Army’s Eastern Division on Governors Island to tell a different story. Worcester, among others, had complicated reasons for wanting Koehler banished. In his inflammatory report, he claimed that his commanding officer had grabbed him at the party “by the testicles” twice. Soon an investigation was underway. Worcester and his sidekick, Second Lt. Austin Frick, rallied at first four and, finally, 16 others to testify to improbable gropings, on an ever-evolving timeline. The military trial made sensational front-page national news daily.

That Ben was a stickler for discipline, there’s no doubt, ordering men to button their collars on hot days and closing the officers’ club after general rowdiness spun out of control. In short, Ben Koehler was a stiff — or “wanting in charisma,” put more diplomatically. The cool guys didn’t like being subject to his authority and drummed up charges that they suspected would stick, or so goes Ms. Lindberg’s argument. As most of the accusers were subject to Worcester’s rule, they stood much to lose by not standing with him. The Army fast-tracked the trial rather than deal with the complications of routing out and court-martialing a cabal of liars.

Ms. Lindberg is the author of “The End of the Rainy Season: Discovering My Family’s Hidden Past in Brazil.” Her current book is a lawyer’s view of a legal case — detailed and meticulous in unearthing the facts, reasoned in its analysis. That being said, Ms. Lindberg can be forgiven for the occasional sentence that disappears down a rabbit hole of clauses. She makes her overall case with persuasive clarity.

Her analysis of homophobia and the preoccupation with manliness provides intriguing context throughout, beginning with a startling history of cross-dressing. At the height of the Gold Rush, for instance, 95 percent of the migrants were male. Men played the role of women at dances, reports Ms. Lindberg, “signaling ‘female’ status by placing patches over their genitals, tying handkerchiefs to their arms, or wearing dresses.” Who knew? It also suggests why Worcester’s drag act didn’t raise more eyebrows.

In the early 20th century, the influence of the women’s movement and a prolonged period of peace morphed into an idea that men needed to “man up” and flex their pecs. “The newer ‘passionate manhood,’ ” Ms. Lindberg writes, “focused on personal traits such as toughness, muscular appearance, and demonstrated interest in women.” No amount of military status would turn Ben Koehler into this ideal. Because he failed to uphold male norms, his accusers may well have determined it was in the Army’s best interests to oust him, even without proof of any transgressions.

The narrative falters when Ms. Lindberg analyzes the case in the context of contemporary mores. The defense might have fired “a powerful early shot in the fight for gay rights,” she argues, a statement that left this reader scratching her head in bewilderment. Homosexuality was itself considered a perversion punishable by law. A “shot for gay rights” would have been tantamount to legal suicide.

But here’s the thing: Whether Ben Koehler was gay or not is beside the point. The author falls prey to a bias herself in assuming that Koehler, all things considered, might well have been gay, and in doing so weakens her presumption of his innocence. Why even speculate?

Whether Ms. Lindberg succeeds in “inhabiting the inner world” of the accused is debatable — only a novel could do that persuasively. Still, any narrative that exposes abuses in an authoritarian rule, no matter the era, serves history as a whole — particularly where the innocent are subject to persecution. Better still if it’s an involving story such as “Scandal on Plum Island.”

Ellen T. White, former managing editor at the New York Public Library, is the author of “Simply Irresistible,” a book about great romantic women in history. She lives in Springs.

Marian E. Lindberg lives in Wainscott. She will discuss “Scandal on Plum Island” in an online BookHampton program on Friday, June 5, at 5 p.m.