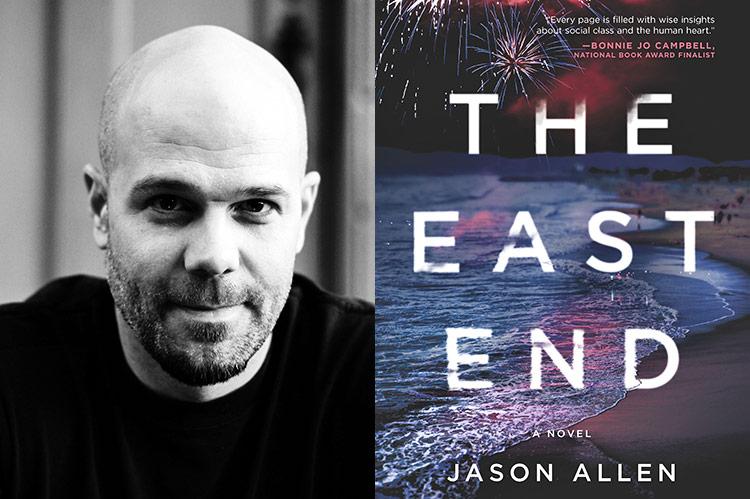 Why is there so little notable literature written about the Hamptons? Judging by its appearance in fiction (and movies, for that matter), you’d think that everyone on the Island lives in a mansion near a roiling surf, fleet of Lamborghinis in the hangar, the swimming pool permanently adorned with bikini-clad beauties glassy-eyed from champagne and world-class cocaine.

Ah, if only it were true.

With his debut, “The East End,” Jason Allen (a Hamptons native) gets close to assembling a novel that feels like the “real” Hamptons. Corey and his mother, Gina, work at the home of Leo Sheffield, a finance tycoon with a large estate in Southampton. Corey is a recent high school graduate, and his dilemma about what to do next with his life will be particularly familiar to the indigenous. There are some vague thoughts of college, while a friend suggests forming a landscaping company together; Corey has his doubts.

“Nothing scared him more than the vision of spending his entire life right here. Most of the adult locals drank a lot but still didn’t seem happy. And no one liked their job. Everyone Corey knew worked as a servant to some degree.”

Exhibit A is Gina — a Jack-of-all-trades helper for the Sheffields. Though Gina is diligent and hard-working, the lifestyle of a Hamptons have-not seems to have worn her down. She has a booze and painkillers habit, along with an abusive boyfriend named Ray she is trying to get rid of. As Corey says of himself, “in another year or two he’d fall into the trap of seasonal work, the same cycle of poverty in the winter and endless hours of work all summer that his mom, Gina, went through each year. . . .”

“The East End” has a nifty opening in which we follow Corey around on a night of what he calls “pranking” — that is, breaking into the palatial homes where he has worked as a private landscaper and handyman. Most of the homes are empty, but if someone is sleeping upstairs, so much the better, as this ratchets up the risk, and therefore the thrill. The pranks themselves are mostly just mischief — dumping salt into the milk carton, etc. — and initially you wonder why Corey would endanger himself for such harmless nonsense. But what these episodes reveal, of course, is a deep-seated class resentment, the real kick for Corey coming from violating the people he feels are exploiting him.

On this night he eventually finds his way to the Sheffields’ home. While poking around inside, a door unexpectedly begins to open and Corey flees upstairs to the roof. From there he spies on the two surprise guests — the Sheffields’ daughter Tiffany and her friend Angelique, whom Corey has an ongoing crush on.

Cut to a limo cruising down the Long Island Expressway bearing Mr. Sheffield, his boyfriend, Henry, and enough alcohol and cocaine to incapacitate a blue whale. Tiffany and Angelique have no idea the father is coming to the house that evening. Mr. Sheffield’s boyfriend is a secret — a respite from his loveless marriage to the vacuous Mrs. Sheffield, and the lovers arrive in such a fog of addled self-abuse they barely realize anyone else is at home. When a terrible accident occurs in the pool, witnessed by both Corey and Angelique, the plot kicks into high gear.

A teacher of creative writing, Mr. Allen tells his story with a verve that will likely have the reader overlooking some major plot holes. Would Angelique, for example, really spend a romantic night (and subsequent affair) with the housebreaker she learns has been on the roof spying on her and her friend? And why didn’t any of the witnesses to the accident immediately call the police, if not for self-preservation, then for the possibility that the victim might be saved?

Chances are you’re not going to mind. The characters are so vivid and the narrative has such momentum you just keep flipping pages, willing to forgo all logic. Mr. Allen’s prose has an unpretentious readability that should mark it as a solid summer beach read (if there is such a thing this year).

What may prove genuinely unsatisfying to readers, however, is the ending. Suffice to say that another major plot point involves blackmail. And although the scheme is perpetuated by characters you’ve come to like, it is in some ways understandable: Mr. Allen’s vision is one in which the grotesque selfishness of the rich has created a world in which the only law is to grab at whatever one can in a given moment.

But instead of including his blackmailers as morally responsible — that is to say compromised — Mr. Allen’s ending imbues these characters with a holy, rosy glow, the tone suggesting a happy resolution. They got away with it! Yes, but with a dead body in their wake.

Readers, I suppose, can decide for themselves. But many will not, and should not, excuse middle-class thievery any more than they excuse that of the rich. These lovers are both damned and doomed, though the author doesn’t seem to know it.

Kurt Wenzel the author of “Lit Life,” among other novels. He lives in Springs.

“The East End” is now out in paperback.