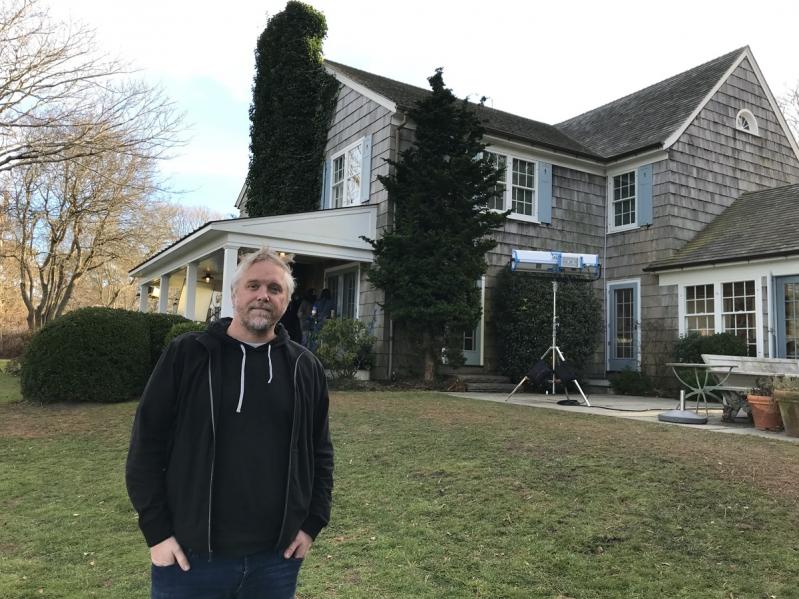 Nick Schutt, writer and producer, on the Wainscott property where much of "Who Invited Charlie?" was shot.
Mark Segal
By Mark Segal

Last December, a film crew took over an expansive house in the Georgica Association, an affluent private enclave on the west side of Georgica Pond in Wainscott. Except for an unusual number of vehicles lined up in a vacant nearby field and a few people talking into headsets at the entrance to the property, the action was hidden from the road by tall hedgerows.

However, not all the principals were interlopers. Maggie Schultz, a co-producer of the film, summered in Wainscott growing up, and her mother's house was the primary East End setting for the film.

Nick Schutt, the screenwriter and co-producer, summered there as well; his father lives in Wainscott full time. And Jordana Brewster, perhaps best known for her recurring role as Mia Toretto in the "Fast & Furious" franchise, has spent summers in the hamlet since she was 12. "We knew each other growing up," Mr. Schutt told The Star during a visit to the set.

The film takes a comedic look at what happens when a well-to-do New York City family decides to quarantine in the Hamptons, only to find its ordered bubble burst by the arrival of Charlie, a dissolute old friend and former college roommate of a family member.

It's no secret that nothing is guaranteed in the movie business. Screenplays are bought but never produced, films are made but never released. As the Kinks' Ray Davies put it, "Success walks hand in hand with failure / Along Hollywood Boulevard."

However, a mere nine months after the film wrapped in Wainscott, the cast and creative team, including Mr. Schutt, Ms. Schultz, and Ms. Brewster, will be returning to East Hampton for the world premiere of "Who Invited Charlie?" in the 30th Hamptons International Film Festival, which opens on Friday, Oct. 7.

During a phone call, Mr. Schutt, who lives in Los Angeles, said, "It's the perfect place to premiere. It's very humbling to come back to the Hamptons, a place so near and dear to my heart."

Recalling the time spent in Wainscott in December, he said, "I had no idea then how the movie was going to turn out. There were some tough days, it was a very hard shoot. But when I finally got to see the rough cut, I was relieved and very happy. We have a movie, it works. We're all excited to share this movie with the community."

In addition to Ms. Brewster, the other leads, Reid Scott, Peter Dager, and Adam Pally, who plays Charlie, will be in East Hampton for the festival, as will the director, Xavier Manrique, and most of the key crew members. "This is our big world premiere," said Mr. Schutt. "it's all hands on deck. The festival has been great, and David Nugent and his team have been wonderful."

While still working as executive story editor and writer for the Netflix series "Outer Banks," Mr. Schutt noted that he went to Hollywood to write movies, not do TV. "I've been able to make a living as a TV writer, but 'Charlie' really got the movie bug back for me." He has completed two new screenplays since "Charlie" wrapped.

A festival Spotlight Film, "Who Invited Charlie?" will be shown on Oct. 8 at 2:15 p.m. at the East Hampton Middle School and on Oct. 9 at 2 at the Southampton Arts Center.