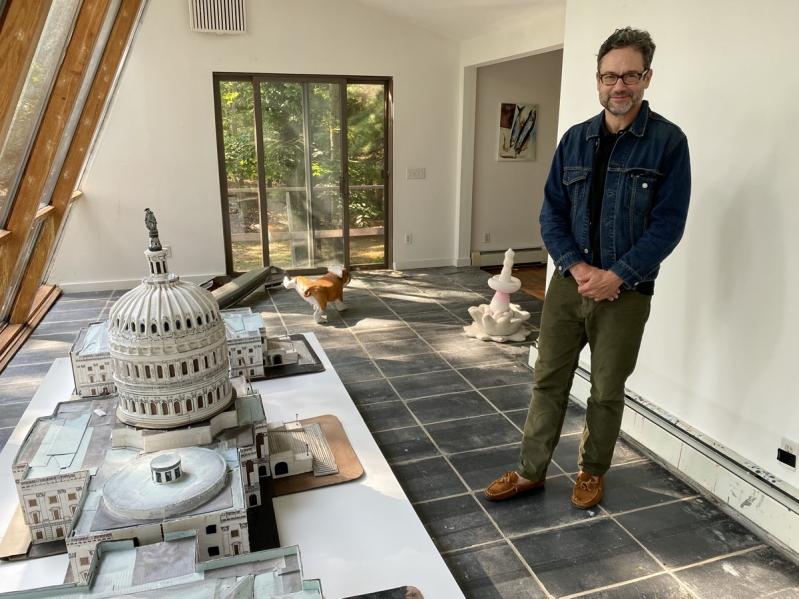 Chris Byrne next to a work of visionary architecture by Kambel Smith, a self-taught artist and former de Kooning House resident. In the background is a fiberglass bulldog purchased by the artist Maurizio Cattelan from Yesterday's Treasures in Southampton.
Mark Segal
By Mark Segal

Chris Byrne has worn many hats. He has owned the Elaine de Kooning House in East Hampton's Northwest Woods since 2010. He co-founded the Dallas Art Fair in 2009, and that same year, he was named chairman of the board of the American Visionary Art Museum in Baltimore.

He has written both "The Magician," an elaborate graphic novel that is in the collections of over a dozen important libraries, and "The Original Prints: Understanding Technique in Contemporary Fine Printmaking."

But only the museum hints at an obsession that has driven him since the mid-1990s: Artists, self-taught or otherwise, who have not received their due from the art establishment.

"It was when Klaus Kertess organized the Whitney Biennial in 1995 and I saw Peter Saul's work that this light went off," he said during a conversation at the de Kooning house. "There are very great artists who have not been recognized."

He was involved at the time with a gallery in Dallas that had organized exhibitions of Peter Halley and Ross Bleckner, among other notables. "I started getting interested in Peter Saul and Elaine Sturtevant. That was why I moved away from the gallery. I wanted to be more independent." And he has been, ever since.

In 2010 he organized "Peter Saul: 50 Years of Painting" at Haunch of Venison, a contemporary art gallery in Chelsea that operated from 2002 to 2013. It was the artist's largest survey in New York City, and it was named one of the top five gallery shows of 2010 by The Village Voice. The catalog included an introduction by Eric Fischl and an interview with the artist by Mr. Byrne.

That show, and several of work by the artist Susan King, are among the projects he is most proud of. Ms. King, a self-taught artist, lives with a sister in New Zealand. "She has been diagnosed as autistic," Mr. Byrne said, "and hasn't spoken in 40 years."

Self-taught art, he said, is "paradoxical. People going to art school like me, trying to think of something new is actually derivative, while the people who are dealing with art with a small 'a,' as personal expression, are more inventive."

He has arranged several shows of Ms. King's work in the city: at the 2013 Outsider Art Fair, the Andrew Edlin Gallery in 2014, and the Marlborough Gallery in 2017. The Edlin show was listed as one of the best of the year by Jerry Saltz in New York Magazine and by Huffington Post.

Mr. Byrne also introduced Ms. King's work to Tina Kukielski, who organized a 2016 exhibition at the Institute of Contemporary Art, Miami; he interviewed the artist's sister for the catalogue.

Comics have also been an abiding interest since Mr. Byrne was a student at the University of Pennsylvania. Indeed, the roots of "The Magician" date to his college years, although the book itself began to take shape some years later and required a decade to realize, and two more years to produce.

"The Magician" is really a box that holds a dozen separate publications, printed and hand-bound using a variety of techniques. Designed by Mr. Byrne and Scott Newton, it was published by Marquand Editions in an edition of 20, with five artist's proofs. It resists a condensed description.

The writer and critic Dan Nadel said, "There is no single reference point for Chris Byrne's ingenious 'The Magician.' It is a wunderkammer, a Cornell-ian box, a visual novel, a conjurer's tool kit. Above all it's a moving, multi-faceted graphic narrative. There's never been anything quite like it."

Discussing the project's origins, Mr. Byrne said that while in college he would sometimes take night classes at the Pennsylvania Academy of the Fine Arts. "There would always be someone in there who'd been working on a painting for 40 years, and it was so meaningful to them. I would think, I hope that never happens to me. But it did!"

Obsession is a quality often associated with outsider or self-taught artists, one of whom, Frank Johnson (1912-1979), Mr. Byrne showed in his booth at the 2017 Outsider Art Fair in New York. Roberta Smith of The New York Times considered it one of the 10 top shows at the fair, noting the cartoonist's "robust penciling and a cumulative air of obsession."

Mr. Byrne described Johnson's work as a "50-year epic comic book." Johnson began drawing as a teenager and continued until his death, filling 28 notebooks with a continuous comic strip detailing the adventures of a fantasy group of friends. Neither his wife nor anybody else knew of the work until she found it after his death.

Mr. Byrne showed some of the original drawings to Keith Mayerson, an artist and professor who was in residence at the de Kooning House. Next spring, Fantagraphics Books -- "the holy grail of comics," according to Mr. Byrne -- will publish an 1,800-page, two-volume anthology of Johnson's work, edited by Mr. Byrne and Mr. Mayerson. Gary Groth, editor-in-chief of The Comics Journal, introduced Johnson's work at the last Comic Con.

Mr. Byrne's interest in comic books also gave rise, in 2011, to "Zap: Masters of Psychedelic Art, 1965-74," which he organized with the cartoonist Gary Panter at the Andrew Edlin Gallery on the Bowery.

Visits to The Art Show, an annual fair presented by members of the Art Dealers Association of America, led Mr. Byrne to think, "This is manageable, we could do something like this" in Dallas, where he was based. He feels art fairs are viable in regional cities where "there are very intelligent people who don't have access" to a broad range of art.

He left the fair in 2016-17 after the Gagosian Gallery exhibited there, not because of Gagosian but because Mr. Byrne's aim had been to bring in regional galleries that would be relevant to the audience. "Once we got someone like Gagosian, the ceiling was high enough," he said, for him to move on.

"People eventually catch up with great things," Mr. Byrne remarked, citing the painter Alice Neel. When he saw her work in the "Men in Suits" exhibition at Cheim and Read in Chelsea in 1998, he thought, "These are the best postwar portraits. With Neel, you feel there's a person sitting in front of you made of oil paint." Neel eventually had a retrospective at the Metropolitan Museum.

Mr. Byrne bought the de Kooning house from the artist Richmond Burton in 2010, in part because some likely buyers weren't interested in the house's history.

"Ignorance is bliss in everything I do, and I just had the idea that it's worth having this house." The concept of a residency program didn't occur to him at first. However, when he ran into Jose Lerma, an artist friend who was having a museum show but didn't have studio space, Mr. Byrne invited him to use the de Kooning studio. Mr. Lerma spent nine months there.

Over the years, dozens of artists have passed through, some briefly, some for months; Laurie Anderson is there until next month. "When we have the residents, we don't have any rules," he said. "Things just sort of happen, and you can't prescribe what people should do. I resist anything formal, because I don't think it's a formal place. It has a very domestic kind of vibe."

Looking back, it's fortuitous that Mr. Byrne took the plunge out of respect for the house's history. A plaque in front of the property now documents its inclusion in the State and National Registers of Historic places.