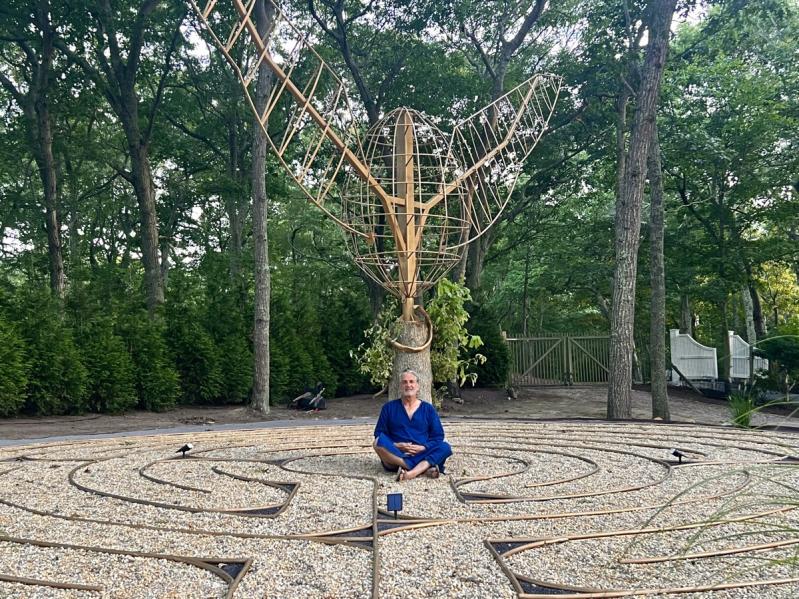 inding peace and tranquillity at the center of a labyrinth he built in East Hampton, David Corigliano also designed the winged egg sculpture in the middle.
Christine Matthai
By Judy D’Mello

"Well, it was Christine . . . ," David Corigliano began, offering an explanation of how he came to build a labyrinth on his East Hampton property.

"No, the sculpture," interrupted Christine Matthai, an artist and his life partner. They were seated on a brilliant white deck at their home, a turquoise pool in the center, her studio beyond that. "The sculpture during the pandemic," Ms. Matthai insisted.

"No, first you came up with the idea because of the pandemic and then you did that drawing," said Mr. Corigliano, an entrepreneur in restaurant, real estate, and hotel development.

"Okay, yes. I did a drawing," conceded the German-born, deeply spiritual Ms. Matthai.

Their story played out much like a walk through a labyrinth, twisting and turning down a narrow, circuitous pathway that's designed to be walked alone, not next to someone else. And this is the key: The narrowness of the path forces you to slow down and contemplate what it is to be lost, what it is to find one's way, and what it is to travel the confusing and circuitous path of life.

Only then can we head toward an enlightened state.

"David and I were isolating at home like everybody else," Ms. Matthai continued. "And we were wondering where life would take us. Because it really looked like we were going to be stuck forever. So, I was questioning where life would go from here. Which also made us think about life's origin. And life originally starts in an egg. So, I did a drawing about life contained in an egg. And then I added wings for it to take off again. That's where the idea came from," she said, showing her artwork constructed of sand from local beaches, acrylic paint, and glitter that she calls, "diamond dust."

The "idea" has now been transformed into a walkable labyrinth, 30 feet in diameter, in the center of which stands a steel sculpture depicting an egg with a pair of giant wings reaching out to the heavens. The installation, christened "Life Taking Flight," and the surrounding labyrinth formed out of pebbles and concentric plastic edging, sits on the couple's property adjacent to their home. Mr. Corigliano cleared a circular area on the three-quarters-of-an-acre plot, repurposing the wood from the felled trees to build a small staircase that leads up to the labyrinth, as well as benches from where one can simply sit and contemplate before or after wending through the intricately coiled paths.

It's worth noting the distinction between a maze and a labyrinth. Where a maze has choices, dead ends, and cul-de-sacs, a labyrinth is a single path with junctions that offer only a binary choice: right or left. If a maze was the status symbol of emperors that became the perfect setting for some athletic Belle-Epoch foreplay, then the labyrinth signaled spirituality and the quietening of the mind, a sense of being on a mini pilgrimage.

Labyrinths are one of the oldest geoglyphic shapes known to humanity, dating to the Neolithic Age in regions as diverse as modern-day Turkey, Ireland, Greece, and India among others. Perhaps most famously, the labyrinth featured in Greek myth, in the tale of Theseus who killed the Minotaur and found his way out of the labyrinth using Ariadne's ball of red thread. It is one of the most intriguing and terrifying of all myths, at the center of which the labyrinth stands as a foundational symbol of human ingenuity and artistry.

In East Hampton, Ms. Matthai and Mr. Corigliano simply wanted to create a place of serenity and meditation. "The labyrinth is just the perfect tool. It's like the beginning, followed by growth, and then you go on your winding path of life with obstacles, and then you find your way around to the center where you meet God. But, we're all gods, so you meet yourself in there. And then, you're pushed out again, back in the world," said Ms. Matthai.

One difference between their labyrinth and most others, is that its center does not signal the end of the journey. Here, a tree stump occupies the labyrinth's bullseye, upon which the winged egg sculpture is mounted, rising 22 feet above the ground. To create the pedestal for his sculpture, Mr. Corigliano had to sacrifice a tree.

"But look, the amazing thing is the tree is still alive," said Ms. Matthai, pointing to a scrum of lush leaves sprouting from the stump. "It's still growing leaves. It sprouted these after it was cut. And what that means is the tree embraces being a holder of the statue."

The couple hope that the curious might visit their labyrinth to partake in a roughly eight-minute walking meditation. (Details on instagram: christinematthai and the website christinematthai.com). For now, it's their lucky neighbors who, if while walking their dogs, stop to peer through an open gate, are invited in by Mr. Corigliano should he happen to spot them.

"If they come, we will invite, we will welcome them," said Mr. Corigliano.

"And, sometimes to just sit on this bench is beautiful. It takes you out of your ego and into your spirit," said Ms. Matthai.

"I sit here and just think about what's the next thing I have to do?" laughed Mr. Corigliano.

But did the project help him find his inner spirit?