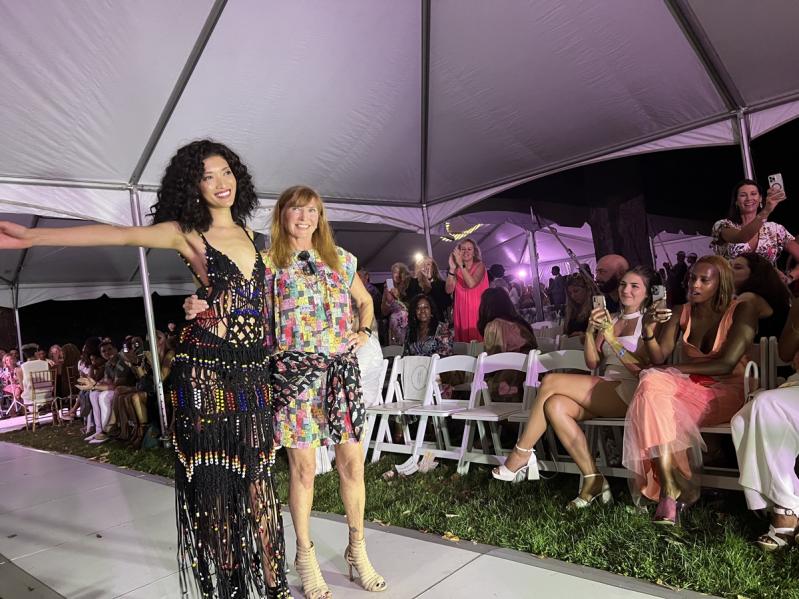 Nicole Miller and her star model took a bow at the end of a fashion show Saturday that saw the return of her zany prints, used in an early 1990s men's tie collection, which became her signature collection.
Judy D'Mello
By Judy D’Mello

The air, over the last couple of years, has been thick with lamentation that most women, from 17 to 70, have discovered the joys of dressing like 6-year-old girls -- ponytail, sneakers or chunky boots, sweatshirt (cropped, if you're 17), fluffy, teddy bear coat, and leggings -- which is why Hamptons Fashion Week made so much sense.

After all, bored fashion designers from Paris to Bushwick no doubt emerged from the pandemic looking out of their atelier windows thinking, "Women look so carefree, so happy. Way too happy. Let's bring fashion back. Bring back acres of exposed midriff, the corset, the Grecian toga gown, definitely vertiginous four-inch Louboutins, and above all, let's bring back heavy, '80s-style makeup, so that women are strutting down the sidewalks again looking like someone with a vendetta."

And that is what Hamptons Fashion Week -- weekend really (it began on Friday and ended on Sunday) -- amounted to. An event to remind us to get back to bodycon dressing because all this working from home in elasticated sweatpants and hoodies is not very fashion.

Held in and around the Southampton Arts Center, the event kicked off on Friday afternoon with the Luxury Shops Runway Show right on Job's Lane, spotlighting brands such as Marina St. Barth, Unsubscribed, Ralph Lauren, Five Story, and Hidden Gems -- labels that are available in brick-and-mortar stores in Southampton.

Saturday was the Full Frontal Fashion Day of Shows, according to the event's organizer, and included a swimwear collection as well as what this writer believed to be the highlight: the Gloria Lee runway show -- featuring a young designer who focuses on wearable, effortlessly cool, sustainable clothing. Although I didn't attend that particular show, I watched video clips on the Hamptons Fashion Week's Instagram feed of pretty, flowing things made of upcycled, leftover fabrics. (By the way, digital fashion shows have their advantages: You can really linger on a design, as opposed to seeing it live for about 11 seconds as the model twirls in front of you.)

I did attend Saturday evening's "star-studded" event that included an award ceremony to celebrate a couple of fashion veterans -- Cesar Galindo, who received the Trendsetter of the Year award, and Nicole Miller, who got the Celebrity Designer Fashion Media Award for having lasted 40 years in the business.

Next, the two award-winning designers showcased their designs in back-to-back runway shows. Perspiring unhappily under a tent in the garden of the Southampton Arts Center, I wondered: Was it the evening's mugginess or the borderline demented level of enthusiasm of the attendees who had opted for full-throttle glamor gear that was melting my brain?

A nice family from the Netherlands, who were on vacation for 21 days in the United States, said they were thrilled to be there, especially their daughter, who was about to go off to university to study fashion design.

Then, thundering club music and the clothes emerged on models who were (thankfully) not the usual stick figures but more representational of semi-real bodies. In other words, decidedly B-list catwalkers. Somehow, this was appropriate as Ms. Miller, according to Ruth La Ferla in The New York Times, is "a designer of the second rank . . . overlooked in favor of editorial darlings considered more adventurous."

And it's true. There was nothing, in either Ms. Miller's or Mr. Galindo's shows that was so avant-garde, or ethereal, or fashion victim-y, or even must-haves. Nothing there that made me want to run home and burn everything in my closet.

Ms. Miller said in a recent interview that this show was something of a retrospective. In the 1980s and '90s what really put her on the map was a tie collection that used a zany hodgepodge of prints of things like pasta shapes, patisseries, checkered racing flags, or the contents of a medicine cabinet.

Assuming there must have been a heap of ties left over from when the fad eventually died, they were back on the runway on Saturday evening. Swatches of the madcap prints were incorporated in her designs. But the end result was less aspirational (like Ms. Lee's upscaled pretty things from the previous day) and more . . . well, old. When Ms. Miller emerged to take a bow at the end, she appeared in a shift dress featuring a fabric printed with Broadway ticket stubs and a shawl tied around her hips that had Coke bottles, planes, and other things on it. Longevity? Bring it on, especially if it breeds creativity in the frustrated young.

There was one of her designs I really liked: a stretchy, gauzy ankle-length dress covered in dinosaurs. Clearly, it was Ms. Miller's nod to the 6-year-old we've all become. The one who loves going to the playground wearing leggings with dinosaurs on them.