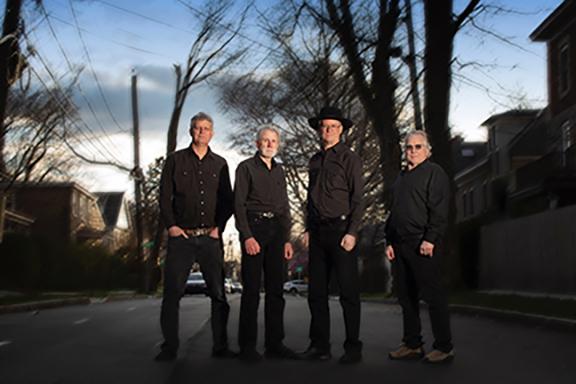 Edna's Kin, a family band from Sag Harbor, will launch its new CD with a performance at Christ Episcopal Church in Sag Harbor.
By Mark Segal

Long Island 'Mikado'
The Gilbert & Sullivan Light Opera Company of Long Island will bring its new production, "The Mikado: A Long Island Fantasy," to the Montauk Library for a single free performance on Sunday at 2:30 p.m.

The new version reimagines one of the most famous of the Gilbert & Sullivan comic operas by setting it on Long Island's Gold Coast in the 1920s, the era of Prohibition, flappers, silent movies, and "The Great Gatsby."

"The Mikado" is one of the most frequently produced light operas of all time. The company's production, directed by Tony Tambasco with music direction by Stuart Watarz, includes more than a dozen of the company's singers and dancers. Highlights from the score are "A Wand'ring Minstrel," "Three Little Maids From School," and "The Flowers That Bloom in the Spring."

Perlman Music
"Tutti Suonare (All Playing)," a concert featuring Perlman Music Program faculty members and students from its chamber music workshop, will take place on Friday at the program's Shelter Island campus, and again on Saturday at the Jewish Center of the Hamptons in East Hampton, both days at 7 p.m.

Tickets are $50 for Friday's concert. For Saturday, the cost is $40 for folding chairs, $60 for pew seating.

Shinnecock Identity
"Shinnecock Perspectives," a free performance that will explore and celebrate indigenous Shinnecock identity through music, dance, and storytelling, will take place at the Arts Center at Duck Creek in Springs on Saturday from 2 to 4 p.m.

The program, in collaboration with the Boys and Girls Club of Shinnecock Nation, the program will feature traditional drumming and dance performances by the tribe's Young Blood Singers and a group of Shinnecock youth, who are practicing the tradition under the guidance of Dyashwa Sylvester, the director of the club.

There will also be a talk by Shane Weeks, an educator, artist, and the author of "Good Neighbors: A Shinnecock History From a Shinnecock Perspective."

Jazz Fest
The peripatetic Hamptons Jazz Fest, in collaboration with Jazz at Lincoln Center, will touch down at the Southampton Arts Center on Sunday evening at 7 with a performance by the Sean Mason Quintet.

A pianist, composer, orchestrator, and musical director, Mr. Mason has performed and toured with the jazz icons Branford Marsalis, Wynton Marsalis, and Herlin Riley, as well as with soul and R&B artists. Known for his mastery of many musical styles, he worked as the pianist for "Hadestown" and "Phantom of the Opera" on Broadway, and "Ma Rainey's Black Bottom" on Netflix.

He will be accompanied by Felix Moseholm, bass; Domo Branch, drums; Tony Glausi, trumpet, and Abdias Armenteros, tenor saxophone. Tickets are $20, $15 for members.

Musical Americana
Edna's Kin, a family band from Sag Harbor, will perform on Sunday at 2 p.m. at Christ Episcopal Church in that village. The concert will feature new songs from the band's second CD, "Two Thumbs," as well as numbers from its first, including "Mount Misery Breakdown," which was inspired by that Sag Harbor neighborhood.

The group consists of Dan Koontz on guitar, Andrew Koontz, his brother, on fiddle, and their father, Warren Koontz, on bass. Bruce Beyer will join the family on drums, and other guests will perform as well. The band members sing and harmonize on traditional American acoustic folk and country songs as well as their own original music.

Tickets are on sale in advance for $10 at Canio's Books in Sag Harbor, $15 at the door.

A Master Gardener
In conjunction with its Landscape Pleasures horticulture programming, the Parrish Art Museum in Water Mill and Hamptons Doc Fest will screen "The Gardener," a 2016 documentary about Frank Cabot, an influential gardener and plantsman, on Friday at 6 p.m.

Directed by Sebastien Chabot, the film features an interview with Cabot shortly before his death at 86, in which he recounts his quest for perfection at Les Quatres Vents, his 20-acre English-style garden and estate in Quebec.

The screening will be followed by a conversation with Alicia Whitaker, a horticulturalist and past president of the Horticultural Alliance of the Hamptons. Tickets are $15, $5 for members, senior citizens, and students.