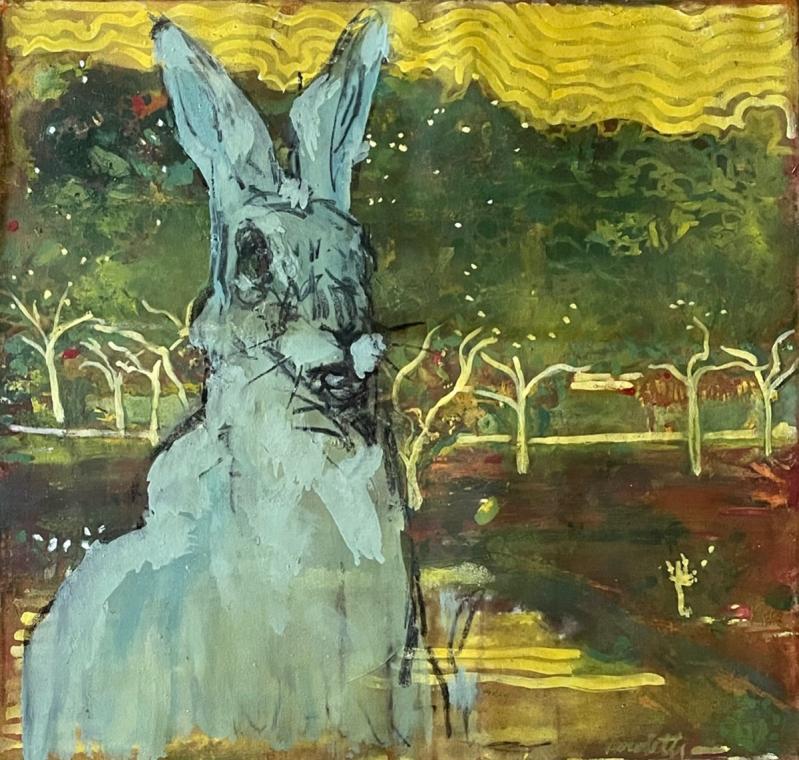 Historic Open Houses
The East End is home to four members of the National Trust for Historic Preservation's Historic Artists Homes and Studios program. All will open for free, self-guided tours on Saturday from 11 a.m. to 3 p.m.

The sites are the Madoo Conservancy in Sagaponack; the Thomas & Mary Nimmo Moran Studio in East Hampton; the Pollock-Krasner House and Study Center in Springs, and the D'Amico Studio and Archive on Lazy Point in Amagansett.

Visitors have been advised to check each venue's website for directions; those who visit all four can receive a membership to the site of their choice.

Drawing on Canvas
“Mercedes Matter: Prints and Drawings, 1966-1986,” is on view at the Mark Borghi Gallery in Sag Harbor through next Thursday. The exhibition focuses on a series of 15 drawings and 15 canvases from the artist’s late period.

The large, observational but abstract, still life drawings, in charcoal on canvas, are recognized as her most significant works, said the gallery. The canvases are broken into fragmented areas that depend on the white of the canvas.

Matter and her husband, Herbert, moved to East Hampton in the 1950s, where their close friends included Jackson Pollock, Lee Krasner, and Willem de Kooning. She died in 2001.

Baselitz at Skarstedt
"Georg Baselitz: Devotion," an exhibition of the full suite of 32 etchings from the artist's 2018 series, will open on Friday at the Skarstedt Gallery in East Hampton and remain on view through July 24.

The series features Mr. Baselitz's reinterpretations of self-portraits of predecessors and peers who have made an impact on him, exploring themes of lineage, memory, influence, inspiration, appropriation, and art history. For his subjects, he chose self-portraits by artists ranging from Otto Dix and Ernst Ludwig Kirchner to Nicole Eisenman, Tracey Emin, and Andy Warhol.

Suburban Mystery
"The Masterworks," an exhibition of paintings by R. Michael Wommack, will open at Colm Rowan Fine Art in East Hampton with a reception Saturday from 4 to 7 p.m. and continue through July 17.

Mr. Wommack chooses as his subjects the interiors of midcentury houses and the coffee tables, armchairs, clocks, televisions, views out the windows, and the play of light and shadow across the walls and floors. Absent of people or street life, his angular compositions have a haunting quality that belies the artist's comment that one of his inspirations is the ordinary suburb of Levittown, where he grew up.

Threading The Church
Sheila Pepe, an artist now in residence at The Church in Sag Harbor, will speak with Sara Cochran, the venue's chief curator, on Friday at 6 p.m. Her work will be featured in the upcoming exhibition "Threading the Needle."

Known for crocheting large-scale, ephemeral installations and sculptures, Ms. Pepe is installing a site-specific piece that will hang from The Church's wooden rafters. The discussion will cover the process and planning involved in creating the work, the first to engage with the historic architecture of the building.

The exhibition will open next Thursday.

Dayton Goes Solo
A solo show of work by Josh Dayton will be on view at Ashawagh Hall in Springs on Saturday and Sunday from 11 a.m. to 6 p.m. Mr. Dayton, who grew up in East Hampton, has cited Jackson Pollock as an early influence.

The exhibition includes 23 paintings and eight works on paper completed over the last three years. Mr. Dayton works with acrylic paint on paper, which he then glues to canvas. His abstract images are inspired by nature.

Organic Ceramics
An exhibition of ceramics by Hilary Helfant will open at Keyes Art in Sag Harbor with a reception on Friday from 6 to 8 p.m. and continue through July 14.

Her geometric abstractions begin with a sphere, from which radiating spikes create a larger, implied sphere. For glaze, she sprays a base color, then creates lines using an application bulb.

While her pieces suggest objects from the sea, the artist says she is not attempting to replicate nature, but rather to create forms that develop organically on their own.

Outdoor Sculpture Tour
Cheryl Sokolow, who organized the exhibition "Uncommon Ground IV" at Bridge Gardens in Bridgehampton, will lead a tour of the more than 20 large outdoor sculptures on Saturday afternoon at 3.

Peconic Impressionist
Caroline M. Bell (1874-1970) was the founder of the Peconic Bay Impressionist Art movement that began in Mattituck at the turn of the 20th century. With seven other women, Bell traveled extensively to paint outdoors, including to sites in Alaska, Woodstock, N.Y., and Gloucester, Mass. The movement eventually had several hundred members, and it continues to this day.

“Caroline M. Bell: A Peconic Bay Impressionist” is on view at the Gardiner Mill Cottage Gallery Museum in East Hampton through July 18.

Poetry and Imagery
Ellen Driscoll, an artist, and Kathy Engel, a poet, began to work collaboratively in January 2021. They will discuss the result of that partnership, “Eyechart,” an outdoor banner installation, print exhibition, and a series of accordion books, in the garden of the Leiber Collection in Springs on Saturday at 5 p.m.

“Eyechart” combines Ms. Driscoll’s drawings with Ms. Engel’s poetry. “One-to-one correspondence of text and image or direct illustration was put aside in favor of surprise, and a welcoming of the unbidden,” says Ms. Driscoll.

Mixed Bag
MM Fine Art will open "East End Artists: Now and Then," an exhibition of works by Hamptons artists from the 1950s to the present, with a reception on Friday from 6 to 8 p.m.

Family Portraits at Firestone
The first important exhibition of paintings by Shirley Gorelick since her death in 2000 is opening on Thursday at Eric Firestone Gallery, 4 Great Jones Street in Manhattan, with a reception from 6 to 8 p.m. It includes paintings from the late 1960s to the early '80s.

Gorelick is known for her realistic, empathetic portraits of families, couples, and siblings, subjects not traditionally featured in large-scale portraiture. The exhibition, which focuses on four families who were repeated subjects, will remain on view through July 29.

Surreal in Montauk
"Summer Dreams," an exhibition of paintings by Lori Campbell, is opening Thursday at Lucore Art in Montauk and will continue through July 14. A reception is set for Saturday from 4 to 7 p.m.

Ms. Campbell, who lives in Montauk, is a surrealist painter who works primarily in oil on canvas. The titles of her eccentric, witty paintings can deliberately mislead. "Lady in the Orange Chair With Balls," for example, does indeed contain an orange chair, but it is occupied by what appears to be a cross between a carrot and a flowering plant.

Childlike Renderings
An exhibition of paintings by Blair Borthwick, a multimedia artist with a home on Shelter Island, will open Friday at Matriark, a boutique there that supports women-owned brands, designers, and artisans.

Ms. Borthwick's work is grounded in Abstract Expressionism. Her aim, says the gallery, is to visualize the precariousness of life and humanity's connectedness in brightly colored, childlike renderings of contrasting forms.

The exhibition will continue through Aug. 1.

Art and Storytelling
"Live and in Person: A Celebration of New York Artists," an exhibition of paintings and sculpture by 17 artists organized by New York's Dawn Nagle Gallery, will open on Saturday at the Southampton Cultural Center, with a reception from 4 to 8 p.m. It will be on view through July 17.

Following the reception, the gallery will present "Every Family's Got One," a performance by storytellers of family-related stories, some funny, some moving, some embarrassing, but all true. Tickets are $45.

Gallery receptions will also happen on July 2 and July 9, from 4 to 8.

Rabbits and Dogs
The Fredric Bernstein Interior Design and Fine Decor Gallery on Shelter Island, in collaboration with the former gallerist Karen Boltax, will open "We Are the Rabbit," a show of new paintings by Juan Torcoletti, with a reception on Saturday from 6 to 8 p.m.

Mr. Torcoletti, who lives on the pampas of his native Argentina, favors imagery that often features animals, especially rabbits and dogs, rendered in an expressionistic, direct, and empathetic manner.

A conversation among the artist, Ms. Boltax, and Mr. Bernstein will take place on Sunday from 1 to 3 p.m.

Gallery Tour
Colin Goldberg, the curator of "Techspressionism: Digital and Beyond," now on view at the Southampton Arts Center, will lead a tour of the exhibition on Saturday at 11 a.m. The event is limited to 30 participants; registration is via the center's website.