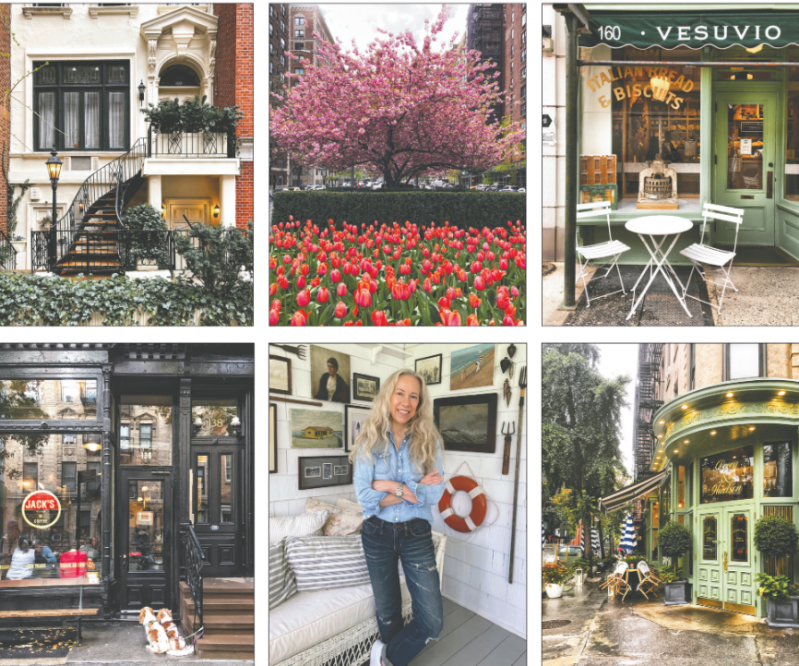 Susan Kaufman, above center in her Amagansett house, has a new book of photographs out, "Walk With Me: New York," a guide to the often overlooked and charmingly picturesque side streets of the city.
(c) 2022 Susan Kaufman and Shawn Young Photos
By Judy D’Mello

Almost all of history's great thinkers have demanded three things: silence, solitude, and some form of physical exercise -- usually walking -- to stimulate thought. To that list, Susan Kaufman has added one more: Instagram.

"I first started on Instagram at the end of 2012, but I really didn't start posting the kinds of things I do now until about 2015. And then I really didn't get serious about it until about 2018," she said during a walkabout in New York City's Greenwich Village, where she has lived for decades, as well as in Amagansett.

By these "kinds of things," she meant her collection of lush photographs of the city's handsome facades, ornate buildings, townhouses with their high-windowed loveliness, flower-bedecked stoops, hidden alleyways -- all the things one rarely associates with this megacity's fiercely splendid, in-your-face personality.

It resulted in "Walk With Me: New York," her photography book that was published last month by Abrams Image, an imprint of Abrams Books. On July 29, she'll host a book signing at BookHampton in East Hampton.

Her fascination with the "charming" side of New York City, its tranquil, more residential streets, began during her walks to work -- she had been in magazine publishing for over 30 years; in 2002 she became the founding editor in chief of People's Style Watch magazine.

"For several years, I would wake up at the crack of dawn to walk before work, slowly expanding my route," Ms. Kaufman writes in her book's introduction. "I began to shoot what resonated with me: distinctive doors (#doorsoftheday was a favorite hashtag), stylish storefronts, classic brownstones, architectural details, and pretty flower shops. Once I left my full-time job, I was happily free to spend even more time exploring and discovering my favorite corners of town."

Which is why I sent her an email sometime in April and asked, "Walk with me?" I wanted to see what she saw and if I had perhaps missed anything during my decades of living in Greenwich Village. Luckily, she agreed. So, on a chilly morning, we met at Bar Pisellino, a ridiculously charming cafe on the corner of Grove Street and Seventh Avenue.

"This is the perfect day for my photographs," she announced, after we had downed espressos, ate Instagrammable pastries, and set off on foot under a flat, gray sky. She simply won't shoot on sunny days: "Too many shadows."

A great degree of care has gone into this book, not only in the photographs, which indeed look as though she went out one overcast day and shot the whole lot, but in many other aspects. She has neatly separated New York's quaintest neighborhoods into chapters: Greenwich Village, West Village, East Village, NoHo and Nolita, SoHo, Gramercy Park, Murray Hill, Upper East Side, Carnegie Hill, and Brooklyn Heights. At the end of each chapter is a lovely, illustrated map of her favorite walk within that neighborhood.

The size of the book was also carefully considered: "I wanted it to be 7 by 9 inches, so you can pop it in your bag and carry it around. It's not a coffee table book. I think of it as a gift book, like a little jewel of a book."

There are also wonderful tidbits of history within these special streets, interesting stories that she uncovered and shared: "And strolling down 10th Street between 5th and 6th Avenues . . . is like taking a walk through history: Mark Twain lived in number 4, poet Emma Lazarus in number 18, and artist Marcel Duchamp in number 28," she writes in the chapter on Greenwich Village.

Then there are her Instagram followers -- almost 90,000, and to whom she is dedicated, facilitating requests and responding to every congratulatory note (and there are many) from strangers, like this one:

"I'm holding the German edition in my hands right now and I'm just thrilled. I planned a trip to New York for December and the anticipation is even greater with the book," wrote someone on Ms. Kaufman's Instagram feed, followed by an emoji with hearts for eyes.

What is it about "Walk With Me" that resonates so deeply with social media scrollers around the world and lifelong New Yorkers?

"When people think of New York, it's usually about the tall steel and glass structures and landmarks like the Empire State Building and the Statue of Liberty, which are all beautiful. But what this book shows is that New York has an incredible mix of styles, of new and old, and that these charming neighborhoods still exist," she explained.

"You don't see that in a lot of cities. Paris is uniformly beautiful. Everywhere you go, it's just one beautiful building after another. New York is grittier, but then there are these beautiful pockets that can feel European at the same time. Like on Washington Mews. All of a sudden, you're like, 'Where am I? Look at these little carriage houses!' The point that I was trying to make was, as a New Yorker, I've lived and grown up in New York, but I've never really looked at New York. Because you're so busy going from one place to the other, you don't really take any time to look and say, 'Oh, that's really quite beautiful.' So, I think for a lot of New Yorkers, it's a way to rediscover their own city and really look at it. Several people have said, 'You've made me look at things that I really was not paying any attention to before.' And that really makes me happy."

"Walk With Me" is a lovely reminder for us all to slow down and be more reflective. Linger for moment and admire the flowers in a window box, the history of a street, or the door of a West Fourth Street brownstone that changes to reflect world events (at the time of our walk, it was painted blue and yellow for Ukraine). These small discoveries, these photo-worthy moments, especially in one's own hometown, offer us a bit of balance in a fast-paced world. (Ms. Kaufman is considering doing her next book on Sag Harbor.)

The book celebrates nostalgia, encouraging us to be tourists into the past. The present, in which we are so frequently advised to live, is fleeting and too often brutal, as it is right now. The past is so much richer, filled with endless lessons and meanings.

Ms. Kaufman has given us a reason to spend more time there.