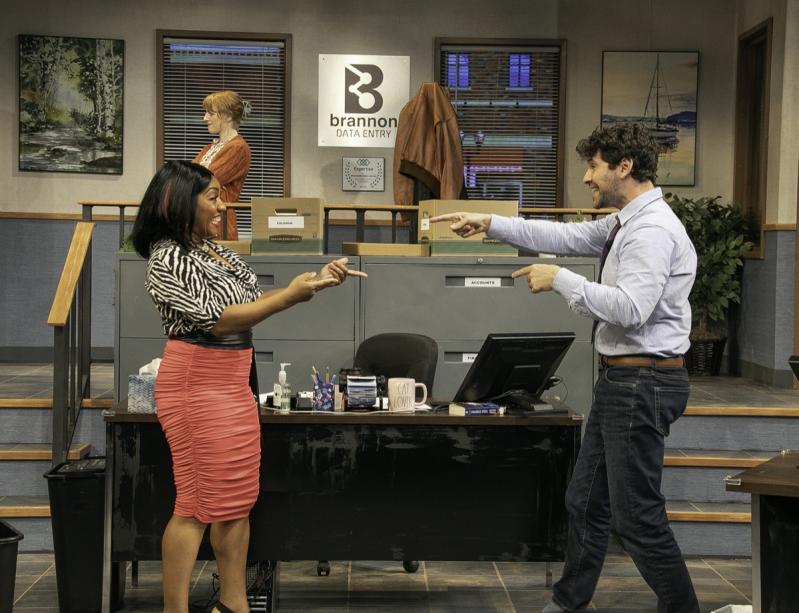 The new play "Windfall" by Scooter Pietsch at Bay Street Theater in Sag Harbor begins as another installment of the office comedy genre, so popular over the last 20 years or so. The formula is straightforward: A small group of beleaguered (but eccentrically humorous) workers toils in an aesthetically barren office doing mind-numbing work, all the while harangued by an egotistical boss (also funny) who's too self-involved to realize that he or she is just as petty and mediocre as everyone else.

The company here is Brannon Data Entry, a job so mundane and poorly paid it seems to be slowly killing each of its employees. Hannah, for example, has a husband who is cheating on her, but she lacks the confidence, and financial means, to leave him. Galvan finds solace in Christianity, injecting Scripture into every conflict he encounters, but which ends up sounding like cant. Kate, the office manager, spends her nights in bars drinking martinis and sleeping with various men. Chris's father has just died, which has caused him to slip further into alcoholism, and he carries his dad's guitar around with him like a talisman. Jacqueline, the new hire, dresses to kill to remind herself of her former prosperity, which, following a divorce, is now long gone.

Enter the boss, Glenn Brannon. Though he also owns the company, the office lifestyle isn't doing much for him either: He arrives with a tube down his throat attached to a gauge to measure his stomach acid levels. He soon rips the tube from his throat and, with his smarmy smile, lambasts his employees while intermittently hocking up bile.

He has an important announcement, however: The new hire, Jacqueline, is a data entry wizard here to replace one of the other four employees, thus pitting everyone against each other to keep their jobs.

This Darwinian game of office survival may remind viewers a bit of "Glengarry Glen Ross," David Mamet's 1984 play, and it moves even further into that territory when Galvan arrives one day stating that he has a scheme that will make everyone in the office rich. He has had a kind of religious vision involving a lottery jackpot of $500 million. This vision requires each of them to buy $900 dollars' worth of tickets (even though many in the group are already heavily in debt). And, he adds, the plan must be carried out exactly as he has imagined it -- any deviation could destroy the integrity of the vision and cause the plan to fail.

Already having been introduced to the weaknesses of these desperate characters, you foresee the plot that propels the show's second half.

It's interesting to watch Mr. Pietsch, the writer, and Jason Alexander, the director, wring as much humor as they do from such well-worn material -- "Windfall" is, for the most part, very funny. Much of that credit must go to the performers, all of whom hurl themselves into their roles with unrelenting vigor and commitment. Mr. Alexander, a comedy veteran, understands that comedy thrives on speed and energy, and in "Windfall" he starts his actors on the high side of the dial and quickly sends them to 11.

Among the standouts is Badia Farha, who nails the brassy, promiscuous Kate with her own endearing moxie -- she may be the most likable of these misfits. And Spencer Garrett takes on the role of the boss as if he's been waiting to play him his whole life. Mr. Garrett's self-satisfied leer never wavers, nor does his apparent relish in eliciting the audience's disgust.

I give nothing away, I'm sure, by telling you that the lottery scheme goes to hell in the second half, and the Brannon employees begin to go after each other one by one. As it turns to violence, you sense that Mr. Pietsch believes "Windfall" is more than just a comedy, but rather an allegory about capitalism. (Jacqueline, in one obvious bit of dialogue, even says the quiet part out loud, stating how they are "destroying ourselves for money.")

The scenes of violence are brilliantly choreographed, but even as the violence draws blood, it generally arrives as slapstick, mitigating any urge one might have to take "Windfall" too seriously. Rather, it is "merely" a fine, energetic comedy. The play (which runs at Bay Street through Sunday) is a genuine crowd-pleaser, and a nice kickoff to the summer season.