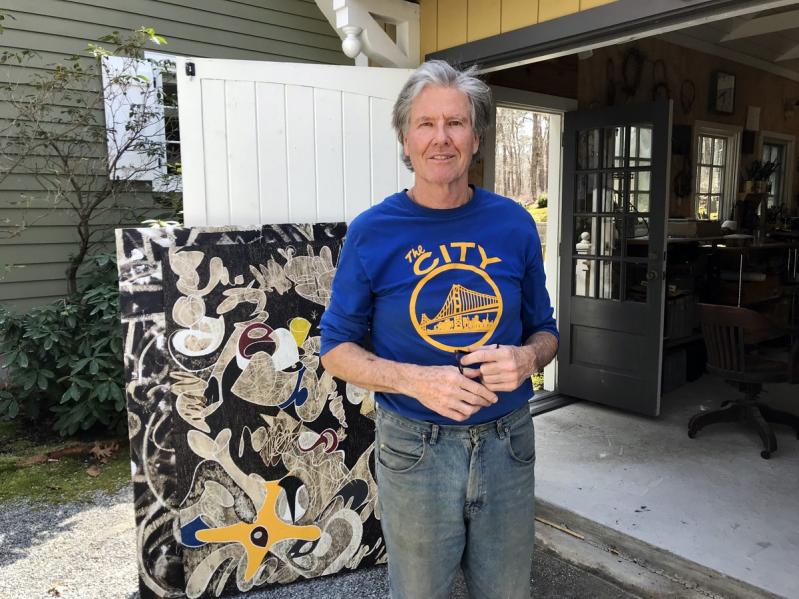 Brian O'Leary met his first artist in 1979, two years after graduating from Duke University as an economics major. He was studying French at a music school in Nice that gave itself over to artists and students of French during the summers.

"The artists were going out into the countryside to paint every day, so I asked if I could go with them," he recalled during a conversation at his Water Mill studio. "They were working artists, and many of them were doing well. They weren't necessarily making landscape paintings, they just did it as an exercise in seeing. It was really interesting to me."

Until that summer, the idea of being an artist had never occurred to him. Fast forward two years, and he was painting and drinking with Robert Rauschenberg at the artist's retreat on Captiva Island in Florida.

The bridge to meeting Rauschenberg was his enrollment in 1981 as an undergraduate at the School of Visual Arts. "I had a lot of great teachers there," one of whom, the painter Don Eddy, give Mr. O'Leary a piece of advice.

"He said to ask yourself what's the thing nobody else can do that's in every one of your paintings, from the time you were a kid to the present. That's where your art is. There's a continuous string, and the closer you get to that, the better an artist you are."

While his fellow freshmen at Visual Arts were 17 or 18, he was 25. He gravitated toward his teachers, among them a woman who was a friend of Rauschenberg.

"When we had our spring break, the two of us went down to Captiva and spent five days hanging out at Bob’s place. Bob stayed up almost all night, which I did also, and we just hung out in the studio, making work, for a week. The joy and beauty that just pours out of that guy was so phenomenal to me. I was completely inspired by it."

After two and a half years, Mr. O'Leary decided to leave school, and rented a loft on the Bowery. He was painting figuratively then, and continued to do so for almost 20 years.

The scale and dimensions of his paintings from the '80s, many 8 by 12 feet, were inspired in part by the screen at the St. Mark's Cinema. While elements of the compositions are realistic -- coffee cups, a hot dog on a roll, classical and mythological figures, a roiling ocean -- their disparate styles and often fragmentary images combine into complex and somewhat surreal landscapes bursting with color and dynamism.

When Mr. O'Leary was working at One Fifth Avenue during the early '80s, Roy and Dorothy Lichtenstein were regular patrons. They invited him out to Southampton for a weekend, and a friendship developed. "I did a lot of physical work at his house in Southampton, and then in 1983 he asked me to be on the crew for his Greene Street mural."

The first of four mural projects he worked on for Lichtenstein, it was created at the Leo Castelli Gallery and measured 18 by 96 1/2 feet. Others were created in Tel Aviv, Los Angeles, and New York.

His own work took a radical turn with the turn of the century. "I decided to take everything out of the painting I could take out, and still have it be a painting. It was the first time I had worked with no subject matter, no color, no images. If I got one, it had to go. Images can pop up really fast, you can't stop them when you're painting."

At the same time, he took pains to disagree with the notion that abstraction and figuration are oppositional. "I think all paintings are equivalent. There are an infinite number of shades, going from photorealism to a complete de Kooning type of abstraction, or paintings that are just one color. There are a million different ways to arrange figuration and abstraction."

Color and recognizable images have returned to some degree in his more recent paintings, 10 of which, combining oil paint and roofing tar on wooden panels, were shown last year at MM Fine Art in Southampton. He uses a variety of tools to apply the tar, among them metal serrated  scrapers that add dimension by leaving the surface scored. Once oil and tar are combined, the painting surface is indestructible.

Mr. O'Leary doesn't start a painting with a plan. "I go in completely at zero. What I like to do the first couple of days when I paint is just have fun. I want to be like a kid. I like to have at least a day or two of that kind of energy in the work before I even think about it as a painting. Some paintings will try to get made really early, but I won’t let that happen."

While he acknowledges that many artists adopt a single style and repeat it successfully, "I'm not good at it. So I'm kind of stuck with that problem, that they're all going to have to look different."

Yet there are qualities to his paintings, from the earliest years to the present, that are unmistakably his: complex, vibrant, all-over compositions; the juxtaposition of disparate, dynamic components, and a certain resistance to interpretation.

Discussing "Church and State," a painting from 2021 chock full of geometric abstractions that collide with recognizable forms, he said, "Don't ask me what it all means. I don't think paintings have to mean anything. And they mean different things to different people anyway." When a painting remains enigmatic, "I don't mind that. I don't want the resolution to be anything other than the energy of the piece."

Mr. O'Leary first came to the East End in the summer of 1983, after a friend who had a job at Sag Harbor's American Hotel said he could easily find work here. "I sublet my loft, rented a little cottage on the Bridgehampton-Sag Harbor Turnpike, and built a little outdoor spot to paint."

He and his wife, Mary Griffo, an interior designer, now live here full time in a house they built in Water Mill. "We tore apart a crappy '70s-era house and redid it ourselves." In fact, since moving to the area, Mr. O'Leary has renovated six houses and the former Wild Rose Cafe on the Bridgehampton-Sag Harbor Turnpike.

He also built the studio, on the Water Mill property. It is relatively small, because "I try to keep very few paintings on the wall. It's too much visual distraction."

Gesturing at the works there, he said, "I like to look at them for a few months, to be sure they're holding together. Sometimes I'll repaint a whole painting that I thought was done. I'm never unhappy that I did that."

A Holiday Gift for Surfers and Beach Lovers
Holiday Lights Go On at the Lighthouse Saturday
Covid Vaccine Clinic at St. Luke's
END_OF_DOCUMENT_TOKEN_TO_BE_REPLACED