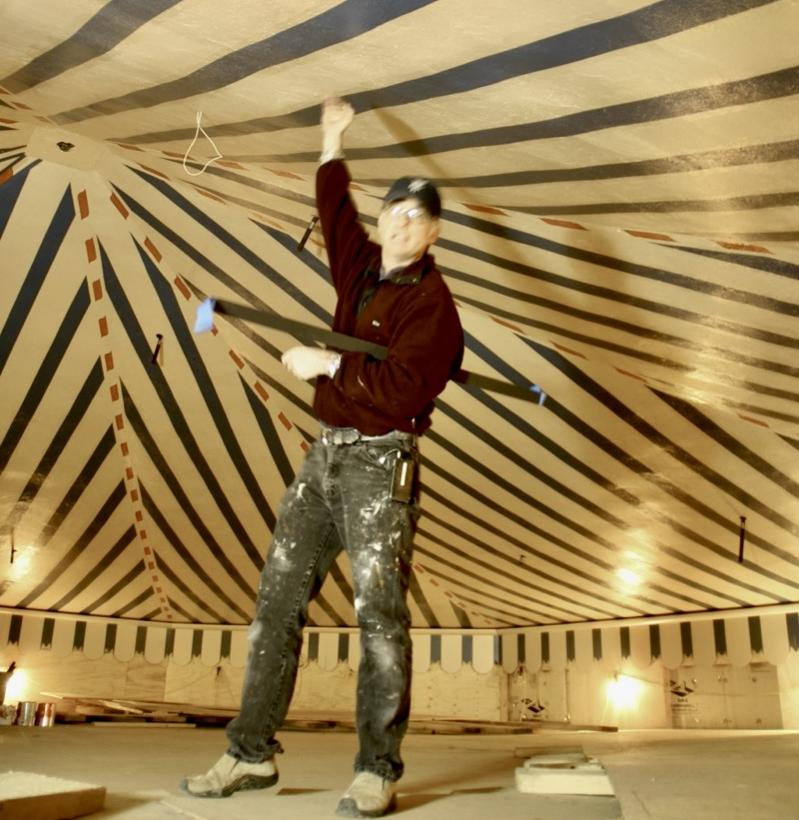 As Guild Hall's proposals for renovations move forward, concerns continue to be raised about what the changes mean for its historical legacy. To date, the most significant critique to have emerged comes from Robert A.M. Stern Architects, the firm that conducted the first major renovations and restorations to Guild Hall's theater, galleries, education center, and offices, which were completed in 2009.

Mr. Stern, whose firm also worked on East Hampton's library and town hall, sent a letter to East Hampton Village recently urging the rejection of "the proposal to replace the delightfully festive Drew Theater with a new facility which, though technologically sophisticated, seems wholly at odds with Guild Hall's community outreach that has historically supported year-round programming ranging from amateur theatricals to top-ranked entertainment culled from New York and elsewhere. . . . Please do not reimagine Guild Hall as a mini Lincoln Center."

In February, the arts center revealed new plans for its exterior and interior spaces, with the most dramatic transformations in the theater. The Guild Hall administration has cited the theater's deficiencies in acoustics, technology, and comfort as key to why the changes would allow it to meet the needs of today's artists and audiences.

Sebastian Paczynski, the theater's technical director, said this week that the acoustic deadening that was done in the 2009 renovation "made the room quieter but didn't direct the sound toward the audience." He also cited needed upgrades to all of the tech necessary for lighting, sound, projection, and special effects, and changes to LED lighting that would save money and increase versatility along with replacing fixtures that are no longer manufactured.

Bran Ferren, a technology visionary who was technical director of Guild Hall early in his career, designed a paneled ceiling and wall configuration that he said will fix the acoustical problems in the space. Behind those panels will be the hardware for the latest advances in lighting and sound delivery.

Randy Correll, a partner in Mr. Stern's firm and the principal architect on the earlier project, recently sent a letter to Sarah Kautz, the director of Preservation Long Island, outlining his and Mr. Stern's concerns with the intended changes to the building, designed by Aymar Embury and built in 1931.

In it, he noted, "Not only is the historic detail of the John Drew Theater being obliterated, but, as evidenced by the published renderings, the original detail in the lobby and galleries will be removed as well."

Speaking last week by phone, Mr. Correll said "it was kind of mind-blowing to think, Guild Hall went for some 80 years before they did anything. Then 10 years after our renovation, they're proposing a whole new renovation, and the points that were being brought up that they are supposedly addressing in this renovation were points that were addressed when we did the project with very good consultants."

Fisher Dachs, which has a long and impressive list of projects in New York City and around the country, was the theater consultant. Jaffe Holden, which worked on Alice Tully Hall and the Kennedy Center, among scores of other venues, was the acoustics consultant.

"Things were well considered and well addressed, and suited what Guild Hall perceived as its needs," Mr. Correll said. "I can't imagine the needs are so radically different now than they were 10 years ago."

"Guild Hall has a variety of programming and it's a small space. It's hard to accommodate every type of program" with its acoustic response. "For film, you need the walls to be absorptive of the sound, for cabernet and pop music you want it to be more reverberant." The rendering presented in February, he said, "looks like what you do for classical music, where you want the sound to be diffused in the room." Although a similar solution was considered in the earlier renovation, he said that since classical music was a small part of the overall programming, it was concluded that "we shouldn't make the whole theater responsive to classical music."

"The acoustic plan," Mr. Ferren countered this week, "is optimized to accommodate a wide range of performances to include classical to contemporary music, spoken word, theater and film, in service of Guild Hall's wide-ranging programming."

A team he supervised physically inspected the space, conducting acoustic testing and measurements on site. They took the data and ran "analysis, modeling and simulation, design, engineering, and optimization. I am confident that the results will yield a substantially improved acoustic experience throughout the theater, for all contemplated performance types, and for every seat."

A 2018 Guild Hall press release announced improvements to the theater's sound system, noting the complete upgrade in 2009. The current proposal is necessary, Andrea Grover, the executive director, and Mr. Ferren said in February, not only for those in the seats but the significantly larger global audience they anticipate will be watching and listening to Guild Hall's programs on their phones and tablets.

That 2018 release saluted the 2009 renovations, when the "theater was restored to its initial glory with its circus tent style ceiling, original moldings, and the reconstruction of the beloved balloons chandelier." In the new design, the chandelier would be taken down and the walls and ceilings would be obscured, and, some have argued, damaged. Mr. Ferren said in February that the panels will be attached in such a way as to not damage the walls, and part of the ceiling would be visible through the panels.

Mr. Correll's letter states: "In the John Drew Theater, we restored the circus tent ceiling, which is paint on plaster. The printed fabric on the upper walls was replaced with an exact reproduction behind which were installed new acoustic panels." The chandelier was rebuilt with variable color LED fixtures within the globes.

Further, "The lower wall paneling and moldings were removed and reinstalled so that acoustic treatments and mechanical systems could be placed in the walls," he said. "We managed to fully conceal all of the new technology and systems inserted into the theater with the exception of the new lighting truss located above the proscenium."

The seating was also replaced and reconfigured to provide more legroom. The first rows of seats are removable so that the stage can be expanded into the audience. Mr. Ferren's design raises the floor of the theater so audiences can be at eye level with the stage, which will be extended forward, with the rows curved around it and no center aisle. The rear boxes will be eliminated and a cantilevered, horseshoe-shaped balcony will replace the current one.

The 2018 improvements provided "a more advanced sound system" and "a cinema industry-standard Stewart perforated screen." At the time, Guild Hall did note the acoustic challenges of the theater's octagonal shape and high ceiling.

Yet Josh Gladstone, who was the artistic director of the theater at the time, said in the same statement, "The cinema and telecast experience sounds just as crisp and sharp as the live concert or play-going experience." He added that during that summer, "audiences were thrilled with the sound at concerts by world-class artists like Yo La Tengo, Richard Thompson, Bela Fleck, and the Avett Brothers -- and the artists were thrilled too. We got a lot of compliments on the room."

According to Ms. Grover, "The audio improvements of 2018 which added speakers and amplification didn't address acoustics. This works well for amplified sound like rock concerts, but does not improve acoustic music or spoken word."

Sam Green, who was part of the 2018 Yo La Tengo show and also performed in the theater with the Kronos Quartet, has been supportive of the new theater plans. "This is about creating a space where artists can do their best work and realize a vision to its fullest," he commented on The Star's Instagram post revealing the new design.