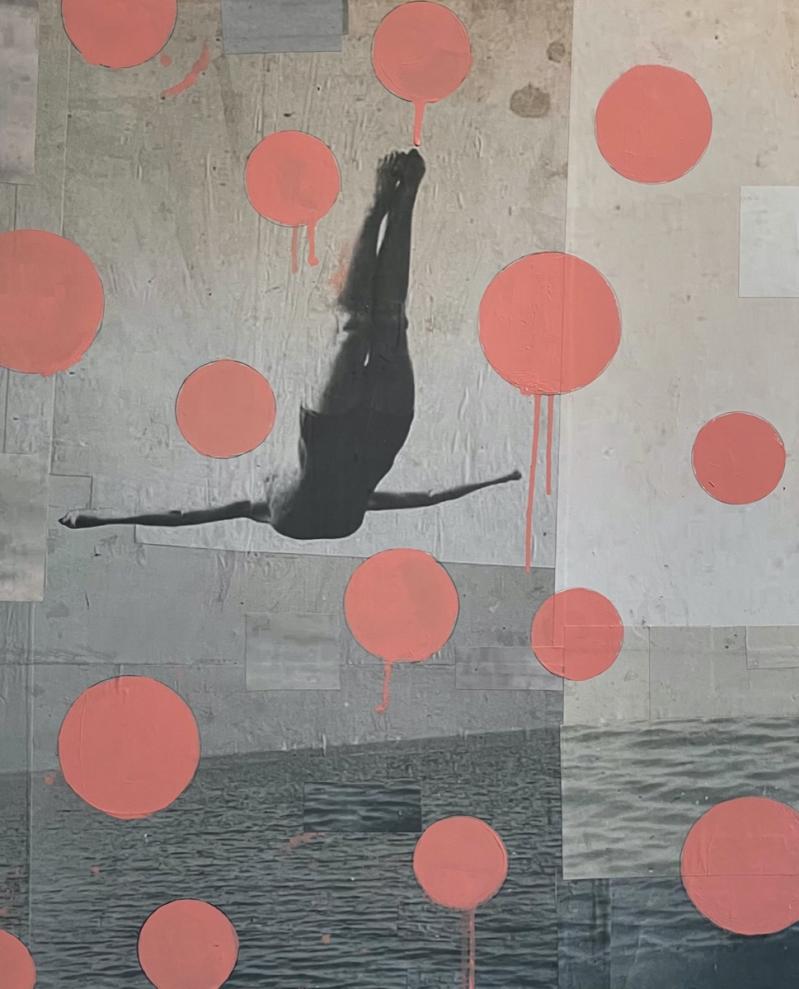 Tom Judd's "Diver With Pink Dots," mixed media with collage, will be on view at MM Fine Art in Southampton.
By Mark Segal

Bleckner on Bleckner
Ross Bleckner and Eric Fischl have been friends ever since meeting at the California Institute of the Arts, also known as CalArts, in the early 1970s. They will meet again Thursday evening at 6 at The Church in Sag Harbor to talk about "Here Is the Ocean, This Is Moonlight," Mr. Bleckner's painting featured in "Empire of Water," the venue's current exhibition.

Mr. Bleckner, a longtime East End resident now based in Springs, has evoked emotion and elegy in his abstract paintings since the '80s, addressing the AIDS epidemic, loss itself, and the passage of time.

In addition to his celebrated career as an artist, he is known for his activism, having served as the president of the AIDS Community Research Initiative of America, and been named a United Nations Goodwill Ambassador for his work helping rehabilitate child soldiers in northern Uganda.

Pollock-Krasner Reopens
The Pollock-Krasner House and Study Center in Springs is opening Thursday for the 2022 season with "Terence Netter: Visions and Revisions Revisited," an exhibition of paintings by the former priest who went on to become the founding director of the Stony Brook University Fine Arts Center.

Netter (1929-2018) met Lee Krasner in 1964 at her home in Springs while he was both a member of the Jesuit Order and an M.F.A. student at George Washington University. It was through his friendship with Krasner that the Pollock-Krasner House and Study Center was deeded to the Stony Brook Foundation.

While his early abstract work has been characterized as action painting, his focus later shifted to minimalist landscapes inspired by his homes in Setauket and the Loire Valley in France.

In 1997, Netter's paintings were featured in the Stony Brook University Art Gallery exhibition titled "Visions and Revisions." The show at the Pollock-Krasner House was inspired by that exhibition and illustrates his tendency to revise earlier work, which was also a practice of Krasner's.

The exhibition will continue through July 31.

Inkblots and the Freedom Tower
An exhibition of works on paper by Bruce Conner and Adam Helms inspired by the Rorschach inkblot test and Matt Kenny's "World Trade Center Paintings" are on view at the Halsey McKay Gallery in East Hampton through May 30.

Throughout his career, Conner (1933-2008) worked with pen, ink, and paper to create inkblot compositions that conjured not only Rorschach blots but also Japanese calligraphy and Egyptian hieroglyphs. Mr. Helms became interested in Rorschach imagery after seeing Connor's drawings.

While the works on view do not depict actual Rorschach patterns, creases on their surfaces reflect the folding of the paper. After each drop of ink or paint was applied, chance operations played a role in determining the overall image.

Mr. Kenny's paintings recast the World Trade Center's Freedom Tower as a grotesque figure with gnashing teeth and arms crossed or akimbo, its features at times wrathful, at times distraught. They are part of his "Monster" series, which is a critique of the overdeveloped cityscape of post-9/11 New York.

The Natural World
"Dots: Tom Judd and Dan Rizzie," a show of work by two artists influenced by the natural world, will open at MM Fine Art in Southampton on Saturday with a reception from 6 to 8 p.m. It will remain on view through May 21.

Based in Philadelphia, Mr. Judd works in a variety of mediums, including painting, collage, photography, and installations. While landscape figures in much of his work, it is sometimes a site of destruction, and often collaged with photographs that extend its meaning.

Mr. Rizzie, who lives on North Haven, has created a unique body of work in paintings, collages, and prints over four decades. Known for his detailed collages and the textural quality of his surfaces, his work is often influenced by the rhythms of nature and his extensive travels.

For Vito Sisti
Vito Sisti, an auto mechanic turned art curator, was informally known as the mayor of Springs because of the many exhibitions he organized at Ashawagh Hall there before his death in 2013. His first "Women's Show" took place in 2003.

Karyn Mannix, an artist, gallerist, and curator, has continued that tradition by honoring Sisti with annual shows of art by women. This year's exhibition, on view Saturday and Sunday at Ashawagh Hall, will feature painting, photography, and sculpture by 17 artists.

This article has been modified from its print edition to include the Matthew Kenny exhibition at the Halsey McKay Gallery.

A Conference for Young People to Create Solutions
Get Outside, Get Moving
Two Traditions, One Fair in Springs
END_OF_DOCUMENT_TOKEN_TO_BE_REPLACED