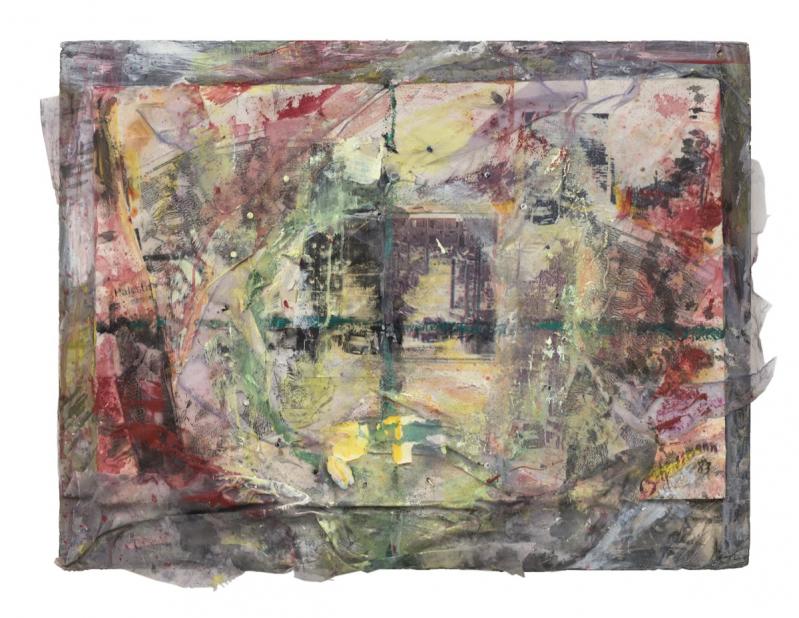 Firestone Expands
Eric Firestone Gallery's warehouse space at 62 Newtown Lane in East Hampton will open to the public for the first time for the presentation of "Hanging/Leaning: Women Artists on Long Island, 1960s-80s." The exhibition will open there and at the gallery's primary location down the street on Saturday, with a reception from 5 to 8 p.m.

25 Years in East Hampton
Harper's Gallery is celebrating its silver anniversary in the village with "25 Years," an exhibition of works by almost 50 artists, with an opening reception Saturday from 6 to 8 p.m.

William Monk at Pace
"The Ferryman," a three-venue exhibition of paintings and works on paper by William Monk, will open its third iteration on Friday at the Pace Gallery in East Hampton and remain on view through June 5.

Mr. Monk is known for his atmospheric paintings featuring mysterious and otherworldly forms, described by the gallery as "visual mantras," that are engaged with notions of the afterlife.

The East Hampton show features a group of works on paper that complement the paintings on view at Pace in Chelsea and GRIMM Gallery in TriBeCa. It also includes a selection of the artist's small oil paintings.

The Manhattan shows will continue through June 11.

Hauser & Wirth Reopens
Hauser & Wirth will open its summer season in Southampton on Saturday with an exhibition of watercolors and dry pigment works on paper by Ed Clark and Stanley Whitney.

The show explores the two artists' shared interest in drawing and watercolor as components of their respective painting practices. The works on view will afford viewers insight into their experiments with color, form, and the seductive materiality of paint.

The exhibition will continue through June 25.

Chats With Gornik, Alexander
In connection with its current exhibition, "Empire of Water," The Church in Sag Harbor will host talks this weekend with April Gornik and John Alexander, both of whom have paintings in the show.

Ms. Gornik, cofounder of The Church, will discuss "Storm Suspended by Light," a large painting that shows the sun setting over the water, which is depicted not as a blue surface but as a reflective medium that mirrors the orange sky with an orange sea. Her talk is set for Saturday at 11 a.m.

On Sunday at 4 p.m., Mr. Alexander, who is a longtime Amagansett resident, will speak with Sara Cochran, The Church's chief curator, about "Feeding Frenzy," his 1999 painting. He will also address his career as a whole, which he has described as a "glimpse of paradise before the wrecking ball hits."

Admission to each talk is $15.

He is also known for his large sumi ink pictographs, which he will discuss on Sunday at 2 p.m. at LongHouse Reserve in East Hampton with its director, Carrie Rebora Barratt.

Mr. Amelan's pictographs suggest archaic writing systems such as ideograms. He works on large antique handwoven hemp sheets, starting with a primal mark and then teasing out shapes and figures through shading and contour. Once finished, the pieces hang like tapestries.

Admission is $15, free for members.

New at Madoo
"Object and Thing," an exhibition of new work by Magumi Shauna Arai, a textile artist, and Frances Palmer, a ceramicist, will open on Friday in the summerhouse studio at the Madoo Conservancy in Sagaponack It will remain on view through June 25.

Ms. Arai's work, which updates the Japanese tradition of Boro ("rags" or "tatters"), incorporates her own naturally made dyes, vintage textiles, and tiling. Ms. Palmer's handmade ceramics are functional art, including dishware or vases appropriate for everyday use. Each piece, no matter the size, is unique.

Animals and Trees
"Tam Lin," new paintings by Miles Partington, and "Found Life," mixed-media sculptures by Benjamin Keating, will open Saturday at the Tripoli Gallery in Wainscott and remain on view through June 27. A reception will be held Sunday from 5 to 7 p.m.

Mr. Partington's work blends the fantastic and the real, representing animals and other figures with such precision that they are believable even when their relationships defy logic. In one, an owl rides on the back of a horse; in another, a garlanded maiden wears a Patti Smith T-shirt.

Mr. Keating operates a foundry and tends a garden that feeds his neighbors. In "Found Life" he combines different species of trees with different types of metal containers. In one, sculpted metal frames a small pine; in another, a mossy mound at the base of a tree is set off by the shine of aluminum that surrounds it.

ARC Fine Art Is Back
ARC Fine Art of Fairfield, Conn., which "summered" in Amagansett in 2014 and 2019, will open a new gallery at 37 Newtown Lane in East Hampton on Saturday, with an inaugural reception from 4 to 7 p.m.

A collaboration between ARC Fine Art and the Schoelkopf Gallery of Manhattan, the exhibit includes 20th-century American masters from Schoelkopf, among them Georgia O'Keeffe, Milton Avery, Marsden Hartley, and Charles Burchfield, alongside such contemporary artists from ARC as Ugo Rondinone, Donald Baechler, Ross Bleckner, and Alex Katz.

The art on view will rotate throughout the summer.

Studio in Springs
The artist Barbara Thomas has re-imagined her Springs atelier as ArtSprings Studio, a space that will host interactive art events and projects, surprise art happenings, workshops led by Ms. Thomas, and exhibitions of work by emerging and established artists.

The venue will launch on Sunday with "Landscape Into Abstraction," an exhibition of paintings by Ms. Thomas, an art consultant, teacher, and landscape painter on eastern Long Island for more than 40 years. It will run through June 26.

"A Plea for the Animals," a group show set for July 1, will include work by Scott Bluedorn, Idoline Duke, Candace Hill Montgomery, Max Siebel, Emily Brown, and Ms. Thomas.

The studio will be open by appointment only; visits can be scheduled by emailing [email protected].

Geometric Abstraction
"The Eye of the Storm," an exhibition of paintings and sculptures by Chris Kelly, will open on Saturday at Colm Rowan Fine Art in East Hampton with a reception from 4 to 7 p.m. It will continue through June 19.

Mr. Kelly's work is inspired by the geometry of nature; specifically, the golden ratio and the Fibonacci sequence. The exhibition focuses on work made during the past year, including large geometric abstract canvases created with oil paint and pencil, never-before-seen works on paper, and abstract wood and steel sculptures.

S.I.S. Members Show
The Springs Improvement Society's 38th Annual Members Show will open at Ashawagh Hall on Friday, with a reception from 5 to 7 p.m., and remain on view Saturday and Sunday from 10 a.m. to 6 p.m., and Monday from noon to 4. All proceeds will go toward the maintenance of Ashawagh Hall.

Flack's Early Work
"Audrey Flack: Force of Nature," a selection of works dating from 1948 to 1954, opens Thursday at the Hollis Taggert Gallery in Chelsea with a reception from 5 to 8 p.m. It will run through June 24.

The artist's works on paper chart a transitional period in her practice, during which she developed her artistic voice and became fully immersed in the Abstract Expressionist movement.

The watercolors reflect Ms. Flack's intuitive engagement with abstraction and illuminate the full trajectory of her career into Photorealism, figurative sculpture, and Post-Pop Baroque.

Pell's Folk Art
Rodman Pell (1909-1995), a descendant of a blue-blood family that gave its name to Pelham, N.Y., was for many years the proprietor of a dockside fish market in Greenport.

After a heart attack in 1968, he retired and began turning out primitive oil paintings that, according to a New York Times article from 1972, lined the walls of his garage.

During the almost 30 years that followed, he established a reputation as an accomplished folk artist. An exhibition of Pell's paintings is on view at the Gardiner Mill Cottage Gallery in East Hampton through June 6. A reception will take place Saturday from 1 to 5 p.m.

Talking Tech
In conjunction with its current exhibition, "Techspressionism: Digital and Beyond," the Southampton Arts Center will host "Bridging Technology With Traditional Media," a free in-person conversation with the participating artists Peter Borges, Roz Dimon, Carol Hunt, and Roy Nicholson, on Saturday at 3 p.m.

The arts center's Tech Tuesday series of virtual talks will feature the artist Shimon Attie, who will discuss technology's potential for reimagining  relationships among space, time, place, memory, and identity. Helen Harrison, the director of the Pollock-Krasner House and Study Center, will moderate the 6 p.m. Zoom talk.

Landscapes, Moods, Dreams
An exhibition of work by Gayle Tudisco, Alan Nevins, Barbara Hadden, and Christopher Engel opens Thursday at the Romany Kramoris Gallery in Sag Harbor and will continue through June 16. A reception is set for Saturday from 4 to 6 p.m.

Ms. Tudisco's paintings depict the landscapes, barns, and boathouses of the East End. Mr. Nevins's photographs capture the many moods of nature, from raging seas to storm clouds to tranquil inlets.

Self-taught, Ms. Hadden focuses on the region's architecture, whose unpopulated scenes suggest the influence of Edward Hopper. Mr. Engel's canvases are full of mythical, mystical, and dreamlike figures and faces.

A Conference for Young People to Create Solutions
Get Outside, Get Moving
Two Traditions, One Fair in Springs
END_OF_DOCUMENT_TOKEN_TO_BE_REPLACED