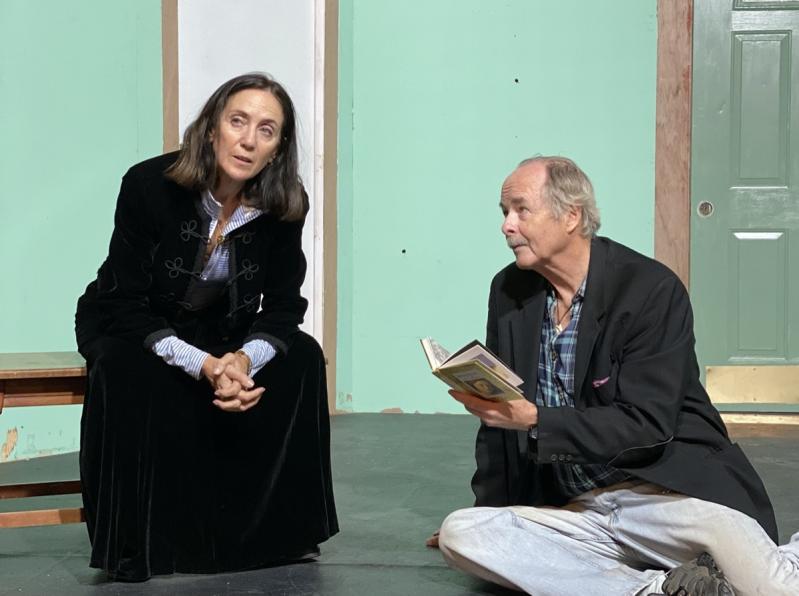 Rosemary Cline and Andrew Botsford in rehearsal for "A Doll's House, Part 2" at the Hampton Theatre Company.
Roger Moley
By Mark Segal

The Hampton Theatre Company in Quogue will conclude its 2021-2022 season with "A Doll's House, Part 2," Lucas Hnath's 2017 sequel to what Ben Brantley of The New York Times called "Henrik Ibsen's revolutionary 1879 portrait of marriage as a women's prison." It will open next Thursday and run through June 12.

When a door slammed at the end of "A Doll's House," Nora Helmer, a young wife and mother, left her husband, Torvald, and their three children, freeing herself from traditional societal constraints.

In the sequel, the same door opens to reveal Nora, 15 years later, a successful writer who has discovered she enjoys living alone. However, it turns out that Torvald never divorced her, and she has returned to see him in the hope that he will agree to do so now.

The theater company makes it clear that one need not have seen or read "A Doll's House" in order to understand "A Doll's House, Part 2," which Mr. Brantley called a "smart, funny and utterly engrossing new play. . . . This unexpectedly rich sequel reminds us that houses tremble and sometimes fall when doors slam, and that there are living people within, who may be wounded or lost."

Ms. Brennan, who was directed by Ms. Cline in productions at Westhampton Beach High School, was awarded the theater company's Peter Marbury Scholarship in 2020.

George Loizides is the production's director and set designer. Lighting design is by Sebastian Paczynski, sound by Seamus Naughton, and costumes by Teresa Lebrun.

Performances will take place Thursdays and Fridays at 7 p.m., Saturdays at 8, and Sunday afternoons at 2:30. An additional matinee is set for June 11, and conversations with the cast will follow the performances on June 3 and June 5.

A Conference for Young People to Create Solutions
Get Outside, Get Moving
Two Traditions, One Fair in Springs
END_OF_DOCUMENT_TOKEN_TO_BE_REPLACED